‘Flee, Be Silent, Be Still’—St Arsenius the Great 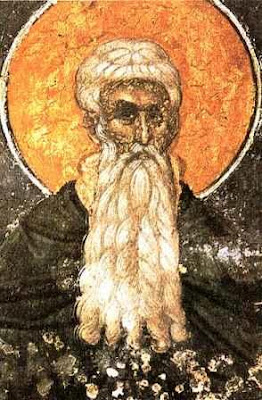 Today, 8 May on the Church’s calendar, we celebrate the memory of St Arsenius the Great of Scetis (c. 360-449). According to Helen Waddell, St Arsenius was ‘reckoned a scholar both in Constantinople and Rome, a master of both Greek and Latin’, and a ‘haunted aristocrat’ (The Desert Fathers, trans. Helen Waddell [NY: Vintage, 1998], pp. 64, 65). Benedicta Ward gives the following summary of the life of St Arsenios (The Sayings of the Desert Fathers: The Alphabetical Collection, rev. ed., trans. Benedicta Ward [Kalamazoo, MI: Cistercian, 1984], p. 9):

Arsenius was born in Rome about 360 [Stelios Ramfos suggests 354]. A well-educated man, of senatorial rank, he was appointed by the Emperor Theodosius I as tutor to the princes Arcadius and Honorius. He left the palace in 394 and sailed secretly to Alexandria. From there he went to Scetis and placed himself under the guidance of Abba John the Dwarf. He became an anchorite near Petra in Scetis. He seems to have had only three disciples, Alexander, Zoïlus and Daniel. He was renowned for his austerity and silence and this combined with his learning made him seem somewhat forbidding to the Coptic monks. After the second devastation of Scetis in 434 he went to the mountain of Troë [‘above Babylon, opposite Memphis’, according to Abba Daniel, Arsenius 42; Ward, p. 19] where he died in 449.

His disciple Abba Daniel gives a rare physical description, ‘His appearance was angelic, like that of Jacob. His body was graceful and slender; his long beard reached down to his waist. Through much weeping his eye-lashes had fallen out. Tall of stature, he was bent with old age’ (Arsenius 42; Ward, p. 19). Although little is known about Abba Arsenius’s life before his withdrawal, he was clearly a member of the ‘cultivated intelligentsia’, as Stelios Ramfos calls them (Like a Pelican in the Wilderness: Reflections on the Sayings of the Desert Fathers, trans. and abgd. Norman Russell [Brookline, MA: Holy Cross Orthodox, 2000], p. 213).

The bulk of the sayings associated with St Arsenius concern his asceticism and his extreme reticence in receiving visitors, the spiritual tools he used to purge his pride and reliance on his own intelligence. Thus St Arsenius says, ‘Strive with all your might to bring your interior activity into accord with God, and you will over come exterior passions’ (Arsenius 9; Ward, p. 10). Likewise, in discourse with others Abba Arsenius is diverted from the simple perception of the will of God—‘The thousands and ten thousands of the heavenly hosts have but one will, while men have many’ (Arsenius 13; Ward, p. 11)—while alone with the ‘Spirit of God’ he is ‘in perfect peace’ (Arsenius 38; Ward, p. 18). Indeed, in the first two sayings we see that it is by direct commandment of God that he maintains this goal:

1. While still living in the palace, Abba Arsenius prayed to God in these words, ‘Lord, lead me in the way of salvation.’ And a voice came saying to him, ‘Arsenius, flee from men and you will be saved.’

2. Having withdrawn to the solitary life he made the same prayer again and he heard a voice saying to him, ‘Arsenius, flee, be silent, pray always, for these are the source of sinlessness.’ (Ward, p. 9)

Thus St Arsenius becomes like the angels as described by St Dionysius the Areopagite in his treatise On the Divine Names, VII.2: through his physical asceticism he is freed from matter as ‘burden’, while through withdrawal from social contact, he becomes—again like the angels—free from ‘multiplicity’ (Pseudo-Dionysius: The Complete Works, trans. Colm Luibheid [NY: Paulist, 1987], p. 106). Indeed, he is so angelic that one brother ‘saw the old man entirely like a flame’ (Arsenius 27; Ward, p. 13).

But I would venture to say that this could not be achieved without the practice of obedience. St Arsenius is not θεοδίδακτος, or ‘taught by God’ like St Anthony, who has described this kind of calling in his first letter (Derwas J. Chitty, trans., The Letters of St Anthony the Great [Fairacres, UK: SLG, 1995], p. 1; see also the 3rd letter of Elder Joseph the Hesychast in Monastic Wisdom: The Letters of Elder Joseph the Hesychast [Florence, AZ: St Anthony’s, 1998], p. 49, for the actual term θεοδίδακτος). In fact, there are only two references to St Arsenius’s vast learning within the body of the sayings, and both of these concern his dedication to learning the spiritual life from the other elders.

5. Someone said to blessed Arsenius, ‘How is it that we, with all our education and our wide knowledge get no-where, while these Egyptian peasants acquire so many virtues?’ Abba Arsenius said to him, ‘We indeed get nothing from our secular education, but these Egyptian peasants acquire the virtues by hard work.’ [Interestingly, William Harmless points out that in the Systematic Collection, this questioner is identified as Evagrius Ponticus (Desert Christians: An Introduction to the Literature of Early Monasticism [Oxford: Oxford U, 2004], p. 312).]

6. One day Abba Arsenius consulted an old Egyptian monk about his own thoughts. Someone noticed this and said to him, ‘Abba Arsenius, how is it that you with such a good Latin and Greek education, ask this peasant about your thoughts?’ He replied, ‘I have indeed been taught Latin and Greek, but I do not know even the alphabet of this peasant.’ (Ward, p. 10)

Commenting on these sayings, Ramfos writes, ‘The desert has its own education, an education imparted by peasants and illiterates, that is to say, by people who wish to change themselves rather than satisy their intellectual curiosity or unease. A true education is serious work’ (pp. 207-8). As Elias Matsagouras has written, ‘[I]t was the aim of monastic education to help the novice reach his goals [the natural condition of government by reason, ἡσυχία, ἀπάθεια, etc.] as quickly as possible’ (The Early Church Fathers as Educators [Minneapolis: Light & Life, 1977, p. 41). Ramfos goes on to say of ‘Latin and Greek education’ that it—

bears real fruit when it is founded on spiritual values, when it obeys the divine commandments. This obedience turns the theoretical education of classical antiquity into the ascetical education of practical life, an education to do with how life is lived, not the principles by which it is to be understood. The stronger theoretical thought becomes, the greater the potentiality for radical simplicity to atrophy...The practical character of the education of the desert fathers connects it with the therapy of the soul’s passions. (pp. 212-3)

On one final note, Ramfos has made some quite helpful and relevant comments on St Arsenius’s social withdrawal. They are particularly apropos in our day, when many seem to believe there is something atomistic and even selfish about strict solitude. Commenting on Arsenius 1 and 2, he writes:

The saint was consequently not a misanthrope. He thirsted for true communion and sought it in the desert, in the observance of the three-fold divine commandment: ‘Flee, be silent, be still.’ And indeed he attained it in the highest degree, even to the point of causing misunderstanding, by appearing on the one hand unyieldingly unsociable and inhospitable (Arsenius 7, 104AB; Ward, p. 10), and yet on the other weeping immoderately over the destruction of Scetis: ‘They said of him that his cell was thirty-two miles away. He did not readily emerge from it. For others performed for him the services he needed. But when Scetis was devastated, he came out in tears and said, “The world has lost Rome, and the monks Scetis” (Arsenius 21, 93A; Ward, p. 12). Arsenius would not open his door to visitors and yet he was with everybody. Perhaps they saw him at the katholikon only at rare intervals, but to him it was a place of unity, a center of community. Just as Rome united the citizens of the empire, however far they were from the capital, so Scetis united the monks. In his solitude Arsenius sought true communion and he achieved it. (Ramfos, p. 90)