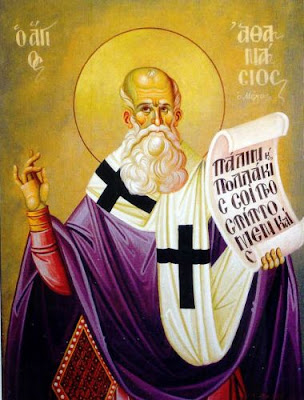 In his lecture on the Sinai Codex Theodosianus (about which I’ve blogged here), Fr Justin mentioned something he’d found in Fr Andrew Louth explaining how some of the Fathers’ uses of the imagery of a mirror, as well as that of St Paul in I Cor. 13:12, presupposed the understanding of mirrors described by Plato in Timaeus 46A-C (see Desmond Lee, trans., Timaeus and Critias [London: Penguin, 1977], pp. 63-4, where there is a very helpful diagram). The specific context of the reference was Fr Justin’s description of St John Damascene’s 2nd Treatise on the Divine Images 20 (Fr Andrew Louth, trans., Three Treatises on the Divine Images, by St John of Damascus [Crestwood, NY: St Vladimir's Seminary, 2003], p. 75). Not remembering having read this before, I believe I asked Fr Justin about where he’d found it in Fr Louth, and he was unable to remember.

But as I was looking for some material on St Athanasius last night, I came across the following in The Origins of the Christian Mystical Tradition, From Plato to Denys (Oxford: Clarendon, 1981), pp. 79-80, which I give as a sort of appendix to the original Fr Justin post:

But, in Contra Gentes, Athanasius introduces a metaphor for the soul’s resemblance to God which might have helped him to bridge the gap between Origenist mystical theology and one firmly based on the insights of Nicene orthodoxy. He speaks of the soul ‘being a mirror in which it can see the image of the Father’ (Contra Gentes 8). And later in the same work he says: ‘So when the soul has put off every stain of sin with which it is tinged, and keeps pure only what is in the image, then when this shines forth it can truly contemplate as in a mirror the Word, the image of the Father, and in him meditate on the Father, of whom the Saviour is the image’ (C.G. 34). This idea of the soul as a mirror which, when pure can reflect the image of God seems to be original to Athanasius. (There are faint hints of it in Theophilus and Plotinus, but nothing as clear and definitive as we find in Athanasius.)

To understand this metaphor we must first appreciate the way in which the Greeks understood mirror images. According to Plato, who discusses the question in an appendix to the Timaeus (46A-C), what happens when we see an image in a mirror is that the light from the eye meets the light from the thing seen on the surface of the mirror, and these two sets of rays of light mingle there, forming the mirror image that we see. So the mirror image actually exists, it is formed on the surface of the mirror; it is not, as in our modern understanding of these phenomena, an illusion caused by rays of light being reflected by the surface of the mirror. It is important to
realize this, for otherwise it is difficult to see that when the Fathers spoke of the soul reflecting the image of God like a mirror they were using an analogy to explain how the soul is the image of God. So self-knowledge involves knowledge of God, because God has made the soul to reflect His image. The idea of the soul as a mirror reflecting God is thus for the Fathers (though not for us with our different understanding of how mirrors work) a metaphor that sees the soul as a real, though dependent, image of God and also suggests that this image of God in the soul is perceived in self-knowledge.

So Athanasius’ metaphor of the soul as a mirror in which God is reflected suggests that there is a real similarity between the soul and God, and preserves the notion that self-knowledge is itself a way of knowing God. But it does this without suggesting that there is a natural kinship between the soul and God. There is no ontological continuity between the image in the mirror and that of which it is the image; so, in the case of the soul reflecting the image of God, this similarity discloses a much deeper dissimilarity at the level of substance. On this understanding, theopoiesis, divinization, will not mean the rediscovery of any kinship between the soul and God, but rather that, as it is purified, the soul more accurately reflectsthe image of God, or becomes more truly that image. We haven, then, an adaptation of a familiar Platonist theme, while the fundamental insight of Nicene orthodoxy into the radical significance of the doctrine of creatio ex nihilo is not at all blurred. Athanasius himself did not develop this idea, but he bequeathed to his successsors a metaphor to describe the soul’s resemblance to God of which they would make good use.