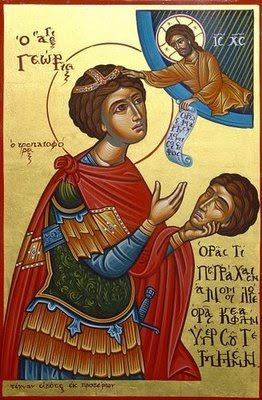 And now, for the final post on St George the Great Martyr (I promise!): Last Friday I was much surprised when I received a comment on the ‘St George, Masefield, & England’ post from Bishop Savas (Zembillas) of Troas, Chancellor of the Greek Archdiocese of America and Adjunct Professor of Dogmatic Theology at St Vladimir’s Seminary. Apart from a kind compliment, His Grace also directed my attention to an interesting book by the Pullitzer-Prize winning author, Robert Olen Butler: Severance: Stories (SF: Chronicle, 2006). Here is the publisher’s description:

The human head is believed to remain in a state of consciousness for one and one-half minutes after decapitation. In a heightened state of emotion, people speak at the rate of 160 words per minute. Inspired by the intersection of these two seemingly unrelated concepts, Pulitzer Prize-winning author Robert Olen Butler wrote sixty-two stories, each exactly 240 words in length, capturing the flow of thoughts and feelings that go through a person's mind after their head has been severed. The characters are both real and imagined Medusa (beheaded by Perseus, 2000 BC), Anne Boleyn (beheaded at the behest of Henry VIII, 1536), a chicken (beheaded for Sunday dinner, Alabama, 1958), and the author (decapitated, on the job, 2008). Told with the intensity of a poet and the wit of a great storyteller, these final thoughts illuminate and crystallize more about the characters' own lives and the worlds they inhabit than many writers manage to convey in full-length biographies or novels.

It was the inclusion of St George, however, that led Bishop Savas to mention the book in his comment. There is a beautiful chapter imagining the final thoughts of the Great Martyr before his soul departed on high. I give it here in full (Butler, p. 57):

far across the field the evil thing sits, small-seeming from here, my horse rears and frets sensing the ancient beast as all creatures of God do, while in my ears I still hear the voices of the villagers a dragon they cry, and so it is, I see the evil one as I have never seen him before, complacent in a meadow beneath the sun his scaled body the color of a toad his breath a faint hiss in the air wisps of smoke rising like morning mist about him the villagers cry my daughter eaten my son eaten my husband and I tell them of the Lord God and his own son whose body also was destroyed and they cry that did us no good and they wail on and I say it did you no good because you have not eaten of your savior and I kneel before a priest in a secret place in Rome and I eat the body and the blood and afterwards I say father shall I leave my arms and he says fight in the Lord’s name and now I sit on the edge of this ignorant village and the dragon lifts his head and unfurls his wings and I thump my fist on my breastplate and I draw my sword and in the center of me there is only the peace that passes all understanding because of the things I have eaten

As we have seen, one could debate the historicity of the dragon story (which, contra Fr Seraphim, seems to be a manifestation of the devil here), and more importantly, the propriety of imagining the 'personalities' and innermost thoughts of the Saints in this way, but whatever we conclude from such arguments, it seems to me that this is a moving and effective bit of prose. The attention to the Eucharist is—to me—unexpected and quite powerful, the question of what rôle arms might play in the Christian's life is addressed in a wonderfully embodied way by the whole context of the piece, and the 'peace that passes all understanding' is a profound and amazing thing to recall in the context of the Saint's famous battle.

As His Grace also indicated, at the NPR site (here) one can listen to the author himself reading five chapters of Severance: Medusa, St George, Sir Walter Raleigh, A Chicken, and Robert Olen Butler. I highly recommend the St George reading, but the others are good as well (I particularly enjoyed Medusa). Readers squeamish about sexual content may want to avoid the Sir Walter Raleigh, whose supposed liaison with Queen Elizabeth I forms the main topic!
Posted by Aaron Taylor at 2:02 AM

Your latest post opened with apology for too much St. George stuff, but I've loved reading every post, especially the excerpts from Fr. Seraphim Rose/St. John of San Francisco and the fabulous reference from the ever interesting and learned Bishop Savas of Troas. So, keep 'em coming! All the best.

Maybe it helps that your name is George!