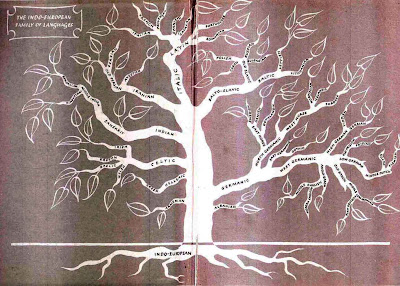 I’ve worn myself out with the Righteous Job posts and the ‘Venerable Sinaites’, so I’ve just got one little thing today. There’s a neat book by Robert Claiborne called The Roots of English: A Reader’s Handbook of Word Origins (NY: Times, 1989)—sort of a layman’s dictionary of Indo-European etymological roots. There’s a lot of fascinating stuff in there, but some time ago I found one that is not only fascinating to me, but also, for the non-linguist, a wonderful example of the surprises of etymology and semantic history:

SKEI-, to cut or split, Gk skhizein, whence SCHIZO- and SCHISM—a ‘split’ in a church. L relatives all come < scire, to know—‘tell [split] one thing from another’—whence SCIENCE, CONSCIOUS (‘knowing’—aware), and the ‘inner knowledge’ of CONSCIENCE. NICE is nescius, not knowing, ignorant, its present sense is idiomatic (see OEtD).

Gc members of the tribe refer to things cut or split, hence detached (‘cut away’), as are SHIT and the tears we SHED. The SHIN was originally a cut-away piece of a carcass, SKIS were made of split boards, and a SHEATH was ? made from a split stick. (p. 216)

So if you'll pardon the vulgarism, the way that I like to set this up, when I tell people about it, is simply to state that the words ‘shit’ and ‘science’ come from the same root. It makes an even bigger impression than the Welsh/Vlach connection.
Posted by Aaron Taylor at 10:46 AM

Thanks for the heads-up: a book I think I'll have to get, having a love of language and linguistics.

Of course, today's etymology is tomorrow's laughingstock. In three thousand years, our etymologies (not to mention our science!) will be as laughable as some find those in the Hebrew Bible.

Good point: and oh so true. It'd be fascinating to travel ahead in time and see what those people make of us and our words -- and our civilisation even.

[On civilisation, I recall a friend saying when she was buried, she wanted to be buried with a cat, a violin and a stone slab with triangles on it -- so that any future archaeologists would be puzzling over what sort of belief she had. :)]