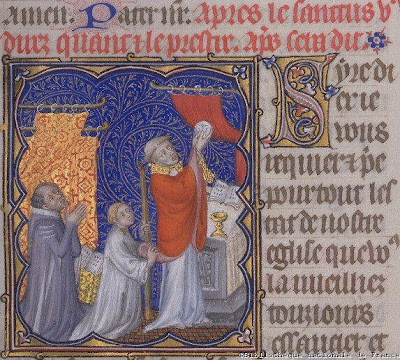 In light of an ongoing discussion on the Western Rite in the combox at Words, Words, Words, I have finally decided it was time to post some remarks by the learned Archimandrite Placide (Deseille), an eminent Roman Catholic convert to Orthodoxy. As a member of a parish where the WR ‘Liturgy of St Gregory’ is celebrated every Saturday morning, in addition to the weekly round of Byzantine services, I have a certain sympathy toward both sides of this debate. Certainly, I do not wish to initiate a controversy here at Logismoi. But I think Fr Placide is in a unique position to offer some wisdom on the relative merits of the two rites, and that whatever direction we as individuals decide to go, we would do well to take his thoughts into consideration. Personally, I prefer the ER precisely for the reasons that he states, and also since my own liturgical experience has been almost entirely in the ER until recently. But I also appreciate the WR for the qualities that Fr Placide mentions below.

Both passages are from Fr Placide’s autobiographical ‘Stages of a Pilgrimage’ (The Living Witness of the Holy Mountain: Contemporary Voices from Mount Athos, trans. and ed. Hieromonk Alexander [Golitzin] [South Canaan, PA: St Tikhon’s Seminary, 1994], pp. 63-93), far and away one of the most fascinating and instructive ‘Journey to Orthodoxy’ stories I’ve ever read.

First, here are Fr Placide’s comments on his relationship with the Latin liturgy as a Trappist at the Abbey of Bellefontaine:

I loved the Latin liturgy deeply. Knowledge of the Orthodox liturgy, which I had just discovered with amazement at Saint Sergius [the Orthodox theological institute in Paris], made me the more sharply aware of the analogous wealth, albeit more hidden, concealed in the traditional Latin liturgy, and stirred me to live in it more intensely. The liturgy of the Trappists was at that time, in spite of some later additions that were easily discernable and did not detract from the whole, identical with the liturgy which the West had been celebrating in the era before it had broken communion with the East. In contrast to the Byzantine liturgy, it was composed almost exclusively of biblical texts, which could seem initially very dry, but these texts had been very skillfully chosen. The unfolding of the liturgical year was perfectly harmonious and the rites, in spite of their sobriety, were charged with a great wealth of meaning. If one took the trouble, outside of the services, during the hours of that lectio divina so characteristic of the earlier monastic spirituality of the West, to take to heart a knowledge of the Bible and the interpretations that the Fathers had give it, the celebration of the divine office took on, with God’s grace, a wonderful sweetness. (p. 69)

After the reforms of the Second Vatican Council (concerning which see an interesting interview here), Fr Placide founded a monastery, really a sort of skete, at Aubazine, still under the authority of the Roman Catholic Church. Here is his explanation of what led him to adopt the Byzantine Rite for the liturgical gatherings of that community:

What therefore prompted me to turn towards the Byzantine tradition had nothing to do with its ‘oriental’ character. I have never felt myself to be an ‘oriental’, nor wanted to become so. But, given the state of things, the practice of the Byzantine liturgy seemed to me to be the most suitable means for entering into the fullness of the patristic tradition in a way that would be neither scholarly nor intellectual, but living and concrete. The Byzantine liturgy has always appeared to me much less as an ‘eastern’ liturgy than as the sole existing liturgical tradition concerning which one could say: ‘It has done nothing more nor less than closely incorporate into liturgical life all the great theology elaborated by the Fathers and Councils before the ninth century. In it the Church, triumphant over heresies, sings her thanksgiving, the great doxology of the Trinitarian and Christological theology of St Athanasius, the Cappadocians, St John Chrysostom, St Cyril of Alexandria, and St Maximus the Confessor. Through it shines the spirituality of the great monastic movements, from the Desert Fathers, from Evagrius, Cassian, and the monks of Sinai, to those of Studion and, later, of Mt Athos . . . In it, in a word, the whole world, transfigured by the presence of divine glory, reveals itself in a truly eschatological dimension’ (M.-J. Le Guillou, L’esprit de l’Orthodoxie grecque et russe [The Spirit of Greek and Russian Orthodoxy] [Paris, 1961], p. 47). (Fr Placide, p. 75)

This second passage reminds me of the New Hieromartyr Hilarion’s words about the services of the Church (trans. Felix Culpa, in this post):

Listening to the Church’s hymns, one grows increasingly convinced of what rich treasures of ideas they are, of how important they are for an authentic Orthodox understanding of life. Our school courses on dogmatics, taught from the cathedras of seminaries and academies, stand much lower in relation to that theology that our readers and singers teach the faithful from the church kliros.

Αληθώς ανέστη! Although I am not a priest, and therefore should not be called 'father' (except by my biological children!), the Lord blesses.