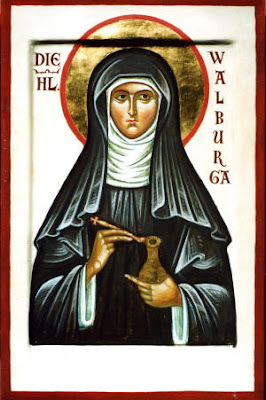 It seems particularly appropriate that as I am writing this, lightning is striking and the lights of my house are temporarily blacking out, ‘for you know what night it is’.

You may say, ‘Tell me, Aaron, what is to-night?’ And I shall cross myself, as I answer laconically: ‘Walpurgis nacht’.

This exchange, very similar to the one concerning the eve of St George’s Day in the finished version of Dracula, is had between the protagonist (Jonathan Harker?) and his coachman, Johann, as he leaves the Quatre Saisons (Vier Jahreszeiten) in Munich in Stoker’s short story, ‘Dracula’s Guest’, a tale bearing an uncertain relationship to the more famous novel. The conversation can be found on p. xxv of Dracula: The Definitive Edition, by Bram Stoker, intro. and appendices by Marvin Kaye, illust. Edward Gorey (NY: Barnes & Noble, 1996).

In the course of the story, the expression ‘Walpurgis nacht’ is repeated several times by the superstitious Johann, essentially to account for his fear or to cut off conversation about a particular topic. Finally, a bit exasperated, our protagonist tells Johann that he will walk, saying, ‘Go home, Johann—Walpurgis nacht doesn’t concern Englishmen’ (p. xxviii). At last, when the Englishman unknowingly seeks shelter from a snowstorm in a graveyard, only to find where he is by the moonlight breaking through the clouds, the coachman’s fear finally has its influence. The narrator writes:

Walpurgis Night, when, according to the belief of millions of people, the devil was abroad—when the graves were opened and the dead came forth and walked. When all evil things of earth and air and water held revel. This very place the driver had specially shunned. . . . It took all my philosophy, all the religion I had been taught, all my courage, not to collapse in a paroxysm of fright. (p. xxxi)

It is at this point that a thunder and hail storm begin, and a flash of lightning eventually reveals a female vampire. In his note in The New Annotated Dracula (NY: Norton, 2008) on the first reference to ‘Walpurgis nacht’, Leslie Klinger writes:

The night before 1 May, Walpurgis-Nacht, the antipode of Halloween, is said to mark the final victory of spring over winter. Traditionally, before the evil spirits occupying winter depart, they have one last gathering, on the Brocken, the highest peak in the Harz Mountains. Goethe records the scene in his play Faust (published in parts, 1790-1833), when Mephistopheles takes Faust to the Brocken to revel with the witches.

Walpurgis-Nacht is named after Walpurga or Walburga, Abbess of Heidenheim near Eichstätt, a Catholic saint whose protection was often invoked against witchcraft and sorcery. As the festival became Christianised, the eve became marked with tolling bells and prayers, blessings with holy water, and displays of blessed sprigs in homes and barns. The most widespread precaution adopted during Walpurgis-Nacht is noise-making, produced by diverse means, including the beating of boards on the ground and the firing of weapons. (p. 504, n. 4)

The passage from ‘Dracula’s Guest’, accompanied by some sort of explanation—the source of which I’ve forgotten—along the lines of Klinger’s note, was of course my first acquaintance with the eve of the translation of St Walburga’s relics, Walpurgis Night, 30 April. Needless to say, I knew very little about the Saint herself until quite recently, when I was pleased to learn that she was not only English, she was Benedictine. Here is the account of St Walburga (a.k.a. ‘"Walpurgis", "Gauburge", "Vaubourg", "Falbourg", and the very unfortunate "Waltpurde"’) from the Fish Eaters site, along with the usual note on customs for the feast:

Sadly, the word ‘Walpurgisnacht’ is nowadays mostly associated with pagans, who see the day as a mere adjunct to Beltane (May Day) and even dare to use the label ‘Walpurgisnacht’ for their festivities....Odes to May, Spring, fertility, and the earth, the playing of pranks—these are the things most often thought of when ‘Walpurgisnacht’ comes to mind, and thoughts of the great Saint are all too rare.

...But it doesn't have to be that way. Bonfires—practically ubiquitous in Catholic celebrations but which pagans also light today in honor of the god (demon) Bel—recall the divine light that illuminated Wallburga's monastery, and as their hypnotic beauty is enjoyed, one can pray a litany to St Walburga. The ancient Swedish tradition of collecting branches at dusk to decorate homes? Make those branches oak branches, and decorate them with symbols of Christ and the great Apostles to Germany to recall the Benedectines' victory over paganism, as perfectly seen in the story of St Boniface and the ‘sacred oak’. As to foods, German fare and beer brewed by Benedictines or their brothers, the Trappists, sound perfect.

Now, because Walpurgisnacht does fall on the same date as Beltane Eve, this will be, for pagans, a night much like Hallowe’en (the Eve of All Saints) insofar as the pagan Samhain coincides calendrically with our Feasts for the dead. Therefore, prayers for pagans and for witches who hold their sabats tonight would be a wonderful thing. May St Walburga—who, with St Boniface, her brothers, and other Benedictines—brought the good news of Christ to Germany intercede for them now and bring them to Jesus through His Church!

Finally, here is part of the litany mentioned above:

Also, see the Catholic Encyclopedia article here, and a post on St Walburga at this blog.
Posted by Aaron Taylor at 11:59 PM

Odd; there is something of the Batman mythos regarding the Joker to this; it is on the eve (the vigil) of a particular saint, say George (or all saints) in which evil becomes very active, almost in reaction to the saint. One does cause the other, but as Lewis notes, hell would have heaven dragged down into it before it comes up...