St George in The Historian 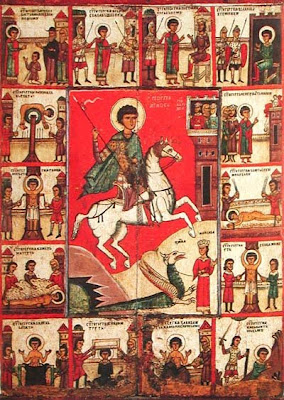 I have already posted about the reference to the eve of St George’s Day in Dracula, but there is a more recent novel about the famous vampire that also makes reference to St George. Readers may recall Elizabeth Kostova’s debut, The Historian (NY: Back Bay, 2006), from this post on St Anthimus the Iberian. A central element of the plot of that book was the idea that after his death in 1476 Dracula’s body was taken from Snagov Monastery near Bucharest to an isolated monastery in Bulgaria named Свети Георги (‘Saint George’). By the 1950’s, when two of the protagonists have gone looking for the place, the monastery is long gone and the former katholikon, no longer dedicated to the Great Martyr, has become merely a village church. But there is an old woman there, Baba Yanka, whom they prevail upon to sing an old folk song which they hope will provide some clues (p. 575):

The dragon came down our valley.
He burned the crops and took the maidens.
He frightened the Turkish infidel and protected our villages.
His breath dried up the rivers and we walked across them.
Now we must defend ourselves.
The dragon was our protector,
But now we defend ourselves against him.

The protagonists question Baba Yanka about the song, and their translator tells them (p. 575):

She learned this song in secret from her great-grandmother, who told her never to sing it after dark. The song is an unlucky song. It sounds lucky but it is unlucky. They do not sing it here except on Saint George’s Day. That is the only day you can sing it safely, without bringing bad luck. She hopes you have not made her cow die in this way, or worse.

By this point in the story, it has become clear that Kostova is playing with the fact that Dracula identifies himself with the dragon, whose name he bears and the image of which he uses as his printer’s device. But this, of course, creates a sort of paradox, since he was supposed to be a Christian, for whom the dragon is a symbol of the devil (the word dracul in Romanian can also mean ‘the devil’) and by whom St George is venerated as a dragon-slayer. For this reason, the monks of the former St George Monastery, who are in fact minions of Dracula, are considered heretics by the Church because they are believed to hold ‘the idea that the dragon has slain Sveti Georgi—Saint George’, ‘a strange reversal indeed’, according to Anton Stoichev, a sort of Bulgarian Van Helsing, or at least Arminius Vambery (p. 542).

But according to a letter of 1477 by a ‘Brother Kiril’, one of the Snagov monks transporting the body, the ‘sign’ identifying this monastery is ‘the monster equal to the saint’ (p. 523, italics mine). Thus, when our protagonists finally identify the village church as that of the St George Monastery, the first clue they find is not necessarily an icon of St George being defeated:

The icon she carried in her arms must have been very old, like that of the Virgin, but through its smoke stains and the wavering heat I could make out an image quite distinctly: it showed two figures facing each other in a sort of dance of their own, two creatures equally dramatic and forbidding. One was a knight in armor and red cape, and the other was a dragon with a long, looping tail. (p. 581)

Once they realise the significance of the church, the protagonists find a missing friend who gives them a small book of beautiful description:

Wrapped in a handkerchief . . . was a book—not the great folio I’d imagined when Rossi had told us about its existence, but a volume small enough to fit in my hand. Its casing was elaborately patterned gold over painted wood and leather. The gold was set with emeralds, rubies, sapphiress, lapis, fine pearls—a little firmament of jewels, all to honor the face of the saint at the center. His delicate Byzantine features looked as if they’d been painted a few days earlier, rather than centuries, and his wide, sad, dragon-forgiving eyes seemed to follow mine. His eyebrows rose in fine arches above them, the nose was long and straight, his mouth sadly severe. The portrait had a roundness, a fullness, a realism I hadn’t seen in Byzantine art before, a look of Roman ancestry. If I had not been in love already, I would have said this was the most beautiful face I’d ever seen, human but also celestial, or celestial but also human. Across the neck of his robe I saw finely inked words. ‘Greek,’ Helen said. Her voice was less than a whisper, hovering at my ear. ‘Saint George.’

Inside were small sheets of parchment in breathtakingly good condition, each covered in a fine medieval hand, also Greek. Here and there I saw exquisite pages of illustration: Saint George driving his spear into the maw of a writhing dragon while a crowd of nobles looked on; Saint George receiving a tiny gilded crown from Christ, who reached down with it from his heavenly throne; Saint George on his deathbed, mourned by red-winged angels. Each was filled with astounding miniature detail. (pp. 633-4) 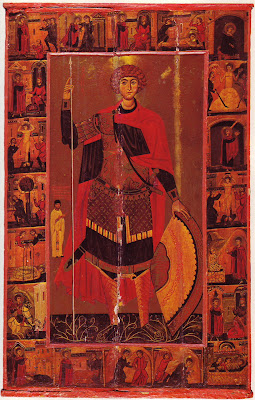 Now I hope I’m not being too pedantic to note that, as much as I admired the description of a Byzantine manuscript (which, I admit, may have other problems as well), the reference to an illumination depicting St George ‘on his deathbed’ struck me as an unfortunate choice of words. I don’t know if anyone else thought there was something wrong about this, but to me it makes it sound as though St George died in bed of an illness, rather than being brutally decapitated for his Faith. Indeed, I would almost have said that there were no depictions of the Saint that could be construed as a ‘deathbed’ scene, since I only remembered seeing him at the moment of his Martyrdom. But if one clicks on the icon to the right (a 13th-c. panel icon from Sinai, the one at the top is early 14th-c. Novgorod) and examines the lower right corner at full size, one can see the Great Martyr wrapped in burial cloths and lying on a bier. I suppose one could take this to be a ‘deathbed’, but considering the panel immediately to the left shows his head being struck off, I would think the expression hardly apt.

One thing Kostova definitely has right though is the date. At one point we read the following exchange between Paul (who described the manuscript above) and a Bulgarian translator (p. 576):

‘When is Saint George’s Day?’ I asked.

‘On May sixth.’ Ranov stared me down. ‘You have missed it by several weeks.’

Judging by the testament from Rossi (the source of the MS described above), which must have been written at some point in the month before this conversation, this takes place in 1954 (p. 597). At first I thought Kostova had made a mistake, though one opposite to that which one might expect—i.e., I thought she had dated the feast by the patristic calendar (according to which 6 May on the civil calendar would be 23 April in the 20th century) when I knew that the Church of Bulgaria had unfortunately switched to the new. But this article tells us that the Bulgarian Church didn’t adopt the papal calendar until 1968 (and, sadly, that it recently voted not to return to the old, consciously choosing to follow the fashions of Western Europe rather than the decisions of the Fathers and the example of Russia, George, Serbia, Jerusalem, Sinai, and Athos). So in 1954, it would be correct to say that the feastday of St George in the Bulgarian Church would fall on 6 May on the civil calendar.
Posted by Aaron Taylor at 12:00 AM

Looking at the top icon, it seems possible to mistake one of the torture scenes for a death-bed scene.

If this is done on purpose (to show the character's relative ignorance) or by accident, I wouldn't know.

Yes, I thought of that too. But I think one would have to look quite hastily to come to such a conclusion. A careful examination shows that in both panels where St George appears to be lying down, he is chained to the table or platform that he is on. It would seem obvious to me that these are merely further tortures. Also, the bottom right-hand corner seems like the logical place to portray the chronologically ultimate scene. If there was a deathbed, wouldn't it be there? In the top icon, this panel shows the moment of the beheading. In the lower icon, it is the carefully wrapped corpse of the Saint lying on a funerary bier.