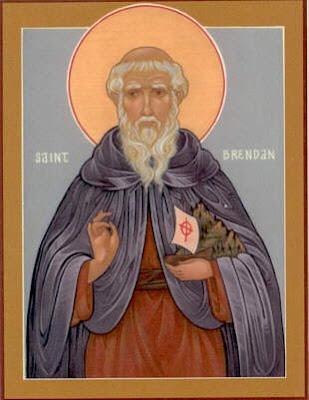 Now for the promised post on Frederick Buechner’s Brendan: A Novel (SF: HarperOne, 1988). Unfortunately, it has been some time since I read it, and I do not currently possess a copy. But I did write down some thoughts at one point at least a little bit closer in time to my reading. I have also found on Google books a passage that I would like to post here.

First of all, although I understand and to a great extent appreciate the objections to novels about Saints’ lives (which were recently discussed in the combox on this post at Orrologion), I nevertheless find that when I want to read a novel, I’d just as soon read one about a Saint. Buechner’s novel, Brendan, is not only a creative telling of the story of St Brendan the Navigator of Ireland, but a true work of literature, not just another entry in the ‘historical fiction’ genre. Perhaps the most fascinating aspect of Buechner’s work is the beauty of the dialect in which the narrator, one of St Brendan’s fellow monks and friends, tells the story. Buechner clearly has a gift for language per se, not just for telling a story.

Orthodox may be wondering about how the author, as a Presbyterian, treats the miraculous and almost fantastical elements in St Brendan’s life, particularly the famous Voyage. Rest assured, these aspects of the story are definitely present in the novel, in other words, Buechner doesn’t omit, psychologise, or explain these away in some clever manner. Indeed, he tells them in an interesting juxtaposition of the directness of the Irish mentality and dialect through which the entire story is presented and an almost surreal otherworldliness which permeates the text, bending reality into an almost iconographic perspective around the holiness and spirituality of the Saint. ‘Magical realism’ may be the first words to occur to many readers, but whatever one calls it, the result is spiritually sensitive and insightful as well as æsthetically brilliant. This is one of my top-ten favourite novels.

The passage I wanted to post depicts an event that takes place after St Brendan’s return from his voyage. He is, as one might expect, being mobbed by adoring disciples, all of them anxious to venerate him and to hear about his voyage. Buechner has, at this point, given a rather dark turn to his portrayal of this period of St Brendan’s life, one which contrasts with the traditional accounts but, to me at least, is not entirely incompatible with the characteristics of sanctity in general. That is to say, I think Buechner’s version of St Brendan’s life is not wholly implausible from a spiritual perspective, as poetically licentious as it may appear to be. I do, however, recommend that Orthodox who wish to really enjoy Buechner’s story read it before rather than after thoroughly familiarising themselves with the traditional accounts. At any rate, here is the passage in question:

They was all of them calling to Brendan at once and knocking each other about to get close enough to touch him for luck. He was flattened against the wall wild-eyed as a stag set on by hounds. It was all he could do to keep them from tearing the clothes off his back for scraps to ward off the evil eye or heal warts. Some of the monks tried to drag them away but it was plain they’d never leave till Brendan spoke of his voyages to them. It was the shortest I ever heard him do it.

‘I’ll tell you about my voyages then,’ he said. ‘They never did anybody a bit of good least of all Christ.’ The wet was pelting his face.

The jaws of the herders hung agape. The king’s fur hat was sodden and his bullies dripping. They listened like he was telling them the secret truth of life itself.

‘Pray for yourselves and your kindred,’ he said. ‘If you’ve any breath left in you pray for me then for there’s no worse sinner in the land nor a greater fool.’

They parted then without a murmur to let him pass through them. In silence they watched as he went splashing off. It was that very day he fixed on going to dwell on the island in the Shannon.

He was sailing the seas inside himself. His prayers was his craft. Rue and shame was the winds that drove him. (pp. 206, 207)

Incidentally, I know of at least two other references to St Brendan in contemporary literature, both in Umberto Eco. In The Name of the Rose, trans. William Weaver (NY: Harcourt, 1983), when William is speaking to Adso about the monks of Ireland, we read, ‘They were great men. Saint Brendan reached the Isles of the Blest and sailed along the coasts of hell, where he saw Judas chained to a rock, and one day he landed on an island and went ashore there and found a sea monster. Naturally they were all mad’ (p. 313).

Then, in Baudolino, trans. William Weaver (NY: Harcourt, 2000), during the course of a discussion about the idea of the Earthly Paradise, Abdul says:

That virtuous man who came from my island, Saint Brendan, sailed the seas to the farthest confines of the earth, and discovered an island all covered with ripe grapes, some blue, some purple, others white, with seven miraculous fountains and seven churches, one of crystal, another of garnet, the third of sapphire, the fourth of topaz, the fifth of ruby, the sixth of emerald, the seventh of coral, each with seven altars and seven lamps. And before the church, in the middle of the square, rose a column of chalcydon with, at its top, a turning well covered with rattles. (p. 98)

If I had time, I’d try to track down these passages’ analogies in the Voyage. Maybe another day!
Posted by Aaron Taylor at 5:00 PM

Thanks for the reminding me that we've been meaning to read this one for some time! Read Buechner's 'Godric' years ago ( I suppose one could call it a companion to 'Brendan')and remember being thoroughly delighted by it, though now can scarcely remember why! guess it was one of the first (albeit, fictionalized) depictions of ascetic sanctity to come our way at that time, and although perhaps in a muted way, suggested the joy in struggles that we have subsequently read and heard in the lives of Saints. Have you read it? If so, how would you relate it to 'Brendan'? Either way, couldn't resist ordering a copy after your endorsement, so it looks like a much needed fiction 'break' will be coming soon!

Goodness, it's been so long since I read either of them that it's very hard to compare them! I would venture to say that the novels are very similar in concept but the language is different (Godric doesn't have the dialect, if I remember, although there is indeed a distinctive narrative voice) and the plot of Godric is a bit more rooted in the mundane. Both can be somewhat scandalous at times, at least insofar as they are more earthy than what many Christians will expect, and the depiction of the Saints is more realist and less stylised than hagiography. I see that in my reading journal I wrote concerning Godric that even though he is dealing with the post-Conquest period, 'on the whole Buechner provides an authentic portrait of the simple, and quite Orthodox spirituality of the native English people of the Middle Ages.' I concluded that it was a 'work of real art and literary merit'. Both statements would also be true of Brendan, IMHO, but of course, unlike Godric it is set in a time when the Church in question was rather unquestionably Orthodox.