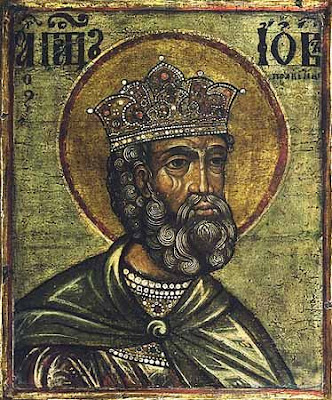 Today, 6 May on the Church’s calendar, we celebrate the memory of the Righteous Job the Long-suffering. There is a brief and useful account of St Job’s life in the Prologue for today:

Job was a descendant of Esau the grandson of Abraham and lived in Arabia about 2,000 years before Christ. His father's name was Zareth and his mother's name was Bosora. However, his full name was Jobab. Job was an honorable, god-fearing man and very wealthy. In the seventy-ninth year of his life, God permitted difficult temptations to befall him through Satan as it is written in detail in the Book of Job. In one day, Job lost all his enormous estates, his sons and his daughters. After that a terrible disease befell him and his entire body was covered with sores from his head to his feet and Job lay on the rubbish heap outside the town and with a piece of potsherd scrapped away the pus from his wounds. Job did not murmur against God, but patiently endured all sufferings to the end. That is why God restored his health, gave him much greater riches than that which he had before and seven sons and three daughters were born to him as many as he previously had. Job lived for a total of two-hundred forty-eight years always glorifying and praising God. Job is considered to be the model of patient endurance of every suffering which God sends upon us and Job is a proto-type of the suffering of the Lord Jesus.


The renowned Metropolitan of Florina, Augoustinos (Kantiotes), has expanded on the basic plot with an uplifting consideration of St Job’s charactre before his virtue of ‘patient endurance’ had become necessary (A Panoramic View of Holy Scripture, Vol. 1: Orthodox Homilies Introducing All the Books of the Old Testament, trans. Fr Asterios Gerostergios [Belmont, MA: Institute for Byzantine & Modern Greek Studies, 2001], p. 150):

The goods that he possessed he did not keep only for himself, but gave of it liberally too those in need. He was hospitable. The door of his house was always open to every stranger. He was the eye of the blind, the leg for the lame, the support of the poor, and the defender of all those who were wronged. He was the protector of all of his servants, none of whom had any complaint against him, but saw him as a loving father. He was the ideal leader of a society which consisted of hundreds of souls, an example of how people must be led. Everyone wished to see him and associate with him. He was also the head of a family. He had seven boys and three girls.


But of course St Nicholas has entirely skipped over the part that makes the Book of Job itself, rather than a summary of the story, so very worth reading. (To be fair, in her article on Job for the Eerdmans Commentary, Katherine Dell points out that ‘centuries of interpretation of the book have also done so’ [Eerdmans Commentary on the Bible, ed. James D. G. Dunn and John William Rogerson (Grand Rapids, MI: Eerdmans, 2003), p. 340].) It is true that, as we moderns are apt, we mustn’t miss the moral that St Nicholas articulates in his ‘Hymn of Praise’ for ‘Job, the Suffering Servant’:

Tell me brother, what you are able to endure,
And how much of a man you are, I will tell you.


But as is well known, chapters 3-41 contain what is widely considered some of the greatest poetry in human history, but also a penetrating philosophical meditation on the meaning of suffering. Metropolitan Augoustinos mentions the book’s poetic value in a brief statement: ‘The book of Job, written in poetic language, overflows with lyric expressions of moving grandeur, and is characterized by the experts as the greatest poem of ancient times’ (p. 148). Similarly, in regard to the ‘philosophy’ of Job, he writes, ‘Because of its philosophical content, even though it is a poem, this book is a grand description of the inner life of mankind, which tries to solve the great problems of the world and especially the problems of suffering’ (p. 149). But for eloquence, we can do no better, I think, than G.K. Chesterton’s appreciation (Everlasting Man [SF: Ignatius, 2008], p. 98):

Apart from more disputed matters, there were things in the tradition of Israel which belong to all humanity now, and might have belonged to all humanity then. They had one of the colossal corner-stones of the world: the Book of Job. It obviously stands over against the Iliad and the Greek tragedies; and even more than they it was an early meeting and parting of poetry and philosophy in the morning of the world. It is a solemn and uplifting sight to see those two eternal fools, the optimist and the pessimist, destroyed in the dawn of time. And the philosophy really perfects the pagan tragic irony, precisely because it is more monotheistic and therefore more mystical. Indeed the Book of Job avowedly only answers mystery with mystery. Job is comforted with riddles; but he is comforted. Herein is indeed a type, in the sense of a prophecy, of things speaking with authority. For when he who doubts can only say ‘I do not understand’, it is true that he who knows can only reply or repeat ‘You do not understand.’ And under that rebuke there is always a sudden hope in the heart; and the sense of something that would be worth understanding. But this mighty monotheistic poem remained unremarked by the whole world of antiquity, which was thronged with polytheistic poetry. It is a sign of the way in which the Jews stood apart and kept their tradition unshaken and unshared, that they should have kept a thing like the Book of Job out of the whole intellectual world of antiquity. It is as if the Egyptians had modestly concealed the Great Pyramid.


The French-Jewish philosopher, Emmanuel Levinas, argues in a compelling way that ‘Scripture reproaches Job’ for reasoning ‘in the name of the freedom of the ego—as though I had witnessed the creation of the world, and as though I could only have been in charge of a world that would have issued out of my free will’ (‘Substitution’, The Levinas Reader, ed. Seán Hand [Oxford: Blackwell, 1997], p. 111). It seems to me that this take could be permissible within the context of St Gregory the Great’s reading in the Moralia, VI.28.1 (St Gregory the Great, Morals on the Book of Job, Part I of Vol. III [Oxford: John Henry Parker, 1847], p. 260):

After the loss of his goods, the death of his children, the wounds of his body, the words of his wife persuading him to evil, the insulting language of his comforters, and the darts of so many sorrows boldly received, blessed Job ought to have been praised by his Judge for such great power of constancy, if he had been now going to be called out of this present world. But after he is here about to receive back yet two-fold, after he is restored to his former health, to enjoy longer his restored possessions, Almighty God is obliged to reprove with strict justice him, whom he preserves alive, lest his very victory should lay him low with the sword of pride. For what commonly slays a soul more fatally than consciousness of virtue? For while it puffs it up with self-consideration, it deprives it of the fulness of truth; and while it suggests that it is sufficient of itself for the attainment of rewards, it diverts it from the intention of improvement. Job, therefore, was just before his scourges; and, having been praised before by the voice of God, he afterwards increased from the blow. For as a ductile tube is lengthened by being hammered, so was he raised the higher in praise of God, as he was smitten with heavier chastisement.


Of course the final note is indeed this being ‘raised the higher in praise of God’ rather than the chastisement. Thus, as Metropolitan Augoustinos points out (p. 153):

Our Church honors Job in a fitting way. At the end of every Divine Liturgy his voice is heard saying: ‘Blessed be the name of the Lord for ever’ (1:21).

Thus Job concelebrates with the angels and archangels and with the Lord Himself, of whom he is a type.

Let us too, my beloved, be faithful and brave in every sorrow and misfortune, and kneel before the grandeur of the Lord, and like Job say: ‘Blessed be the name of the Lord for ever’ (1:21).


A brief comment on the icon above: it reminds me a little of the recent Russian film, Kolchak. There is a fascinating scene where the Tsar-Martyr gives Admiral Kolchak an icon of Righteous Job the Long-suffering that it seems was pretty similar to the one I've posted. He tells Kolchak that he hopes it will give him comfort in the struggles ahead, and then, as the latter walks away, makes the sign of the cross over him.
Posted by Aaron Taylor at 2:09 PM

I was reminded today of the last paragraph (on the icon) of this post. You may already know but Tsar Martyr Nikolai was born on the feast day of St. Job and therefore always felt he had a symbolic connection with St. Job. You may also know but on one of the icons of St. Nikolai there is a small icon of St. Job also on the top left.

Thank you, sir! I think I had heard about St Nikolai and St Job before, but had forgotten. It's interesting that they seem to have picked up on that in Kolchak.