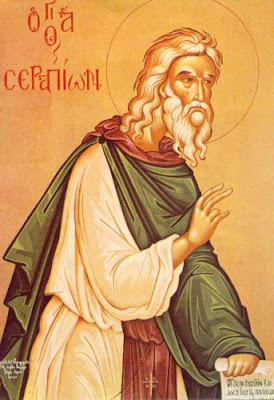 Today, 14 May, we celebrate the memory of the Holy Serapion the Sindonite, one of the Desert Fathers of Egypt. It seems there are a number of Serapions mentioned in the early monastic literature—see, e.g., St Cassian's 5th Conference, in his introduction to which Boniface Ramsey mentions references to Serapions, who may or may not be identical with today's, in four other authors (St John Cassian, The Conferences, trans. Boniface Ramsey [NY: Newman, 1997], p. 177)—but from the Prologue we can get a basic picture of the St Serapion whom we commemorate today. I shall quote in full from the translation by Mother Maria (St Nicholas [Velimirović], The Prologue from Ochrid, Vol. 2: April, May, June, trans. Mother Maria [Birmingham: Lazarica, 1986], pp. 178-9; here is the Sebastian Press trans.):

‘Sindon’ means ‘linen cloth’ [the Sebastian Press trans. adds that it was this cloth ‘in which the bodies of the dead were wrapped’], and this saint was called ‘the Sindonite’ because he covered his naked body only with a linen cloth. He carried the Gospels in his hand. Serapion lived like the birds, with no roof and no cares, moving from one place to another. He gave his linen cloth to a poor wretch who was shivering with cold, and himself remained completely naked. When someone asked him: ‘Serapion, who made you naked?’, he indicated the Gospels and said: ‘This!’ But, after that, he gave away the Gospels also for the money needed by a man who was being hounded to prison by a creditor for a debt. At one time in Athens, he did not eat for four days, having nothing, and began to cry out with hunger. When the Athenian philosophers asked him what he was shouting about, he replied: ‘There were three to whom I was in debt: two have quietened down, but the third is still tormenting me. The first creditor is carnal lust, which has tormented me from my youth; the second is love of money, and the third is the stomach. The first two have left me alone, but the third one still torments me.’ The philosophers gave him some gold to buy bread. He went to a baker, bought a single loaf, put down all the gold and went out. He went peacefully to the Lord in old age, in the 5th century.

The point made here about St Serapion’s Gospel-book is one that is found in some of the early sources on this Saint as well, and not only in this particular story. Douglas Burton-Christie cites a story from the Greek anonymous collection of apophthegmata edited by F. Nau concerning a brother who ‘owned only a book of the Gospels’ (The Word in the Desert: Scripture and the Quest for Holiness in Early Christian Monasticism [NY: Oxford U, 1993], p. 115). In Helen Waddell’s translation of materials from the Latin translation of this collection, this ‘brother’ is named as Abba Serapion (The Desert Fathers, trans. Helen Waddell [NY: Vintage, 1998], p. 145):

lxx. A certain monk Serapion owned a Gospel: and he sold it and gave to the hungry, following the memorable saying: for, said he, ‘I sold that same word that ever used to say to me “Sell that thou hast and give to the poor” [Matt. 19:21].’

Of course, in the Syriac recension of Palladius’s Lausiac History (I can’t tell if the material on St Serapion is found in any of the main recensions, but there is also a brief account of St Serapion at the bottom of this page of Lausiac History material), we are told that St Serapion ‘could repeat all the Scriptures by heart’ (Ernest A. Wallis Budge, trans., The Paradise of the Holy Fathers, Vol. 1 [Blanco, TX: New Sarov, 1994], p. 188). Indeed:

And by reason of the greatness of his self-denial and the repetition of the Scriptures he was unable to live in a cell, because he could not make use of anything which belonged to (this) world; but he went round about at all seasons and taught the multitudes, and he sold himself voluntarily, and he preached, and taught, and turned many people unto God. . . . And he never ate anything except dry bread and water, and his mouth never once ceased uttering (the words of) the Scriptures [see my previous comments on this practice here]. (p. 188)

This is taken even further in a couple of sources when St Serapion deigns to correct others who have not been so free with their copies of the Scriptures. For instance, here is the second saying about St Serapion in the alphabetical collection of apophthegmata: ‘A brother said to Abba Serapion, “Give me a word.” The old man said to him, “What shall I say to you? You have taken the living of the widows and orphans and put it on your shelves.” For he saw them full of books’ (Benedicta Ward, trans., The Sayings of the Desert Fathers: The Alphabetical Collection, rev. ed. [Kalamazoo, MI: Cistercian, 1984], p. 227; this is also found in Waddell, p. 90).

Fortunately, lest we become too alarmed, Burton-Christie has pointed out that even St Serapion found good uses for books. Just before the saying above, in Serapion 1, we read the following story:

1. One day Abba Serapion passed through an Egyptian village and there he saw a courtesan who stayed in her own cell. The old man said to her, ‘Expect me this evening, for I should like to come and spend the night with you.’ She replied, ‘Very well, abba.’ She got ready and made the bed. When evening came, the old man came to see her and entered her cell and said to her, ‘Have you got the bed ready?’ She said, ‘Yes, abba.’ Then he closed the door and said to her, ‘Wait a bit, for we have a rule of prayer and I must filfill that first.’ So the old man began his prayers. He took the psalter and at each psalm he said a prayer for the courtesan, begging God that she might be converted and saved, and God heard him. The woman stood trembling and praying beside the old man. When he had completed the whole psalter the woman fell to the ground. Then the old man, beginning the Epistle, read a great deal from the apostle and completed his prayers. The woman was filled with compunction and understood that he had not come to see her to commit sin but to save her soul and she fell at his feet, saying, ‘Abba, do me this kindness and take we [sic] where I can please God.’ So the old man took her to a monastery of virgins and entrusted her to the amma and he said, ‘Take this sister and do not put any yoke or commandment on her as on the other sisters, but if she wants something, give it her and allow her to walk as she wishes.’ After some days the courtesan said, ‘I am a sinner; I wish to eat every second day.’ A little later she said, ‘I have committed many sins and I wish to eat every fourth day.’ A few days later she besought the amma saying, ‘Since I have grieved God greatly by my sins, do me the kindness of putting me in a cell and shutting it completely and giving me a little bread and some work through the window.’ The amma did so and the woman pleased God all the rest of her life. (Ward, pp. 126-7)

Harmonising this with St Serapion’s negative attitude towards books in the other passage, Burton-Christie concludes:

Serapion is certainly not implying . . . that possessing books is in itself immoral, for he himself made good use of books on occasion. What he appears to be criticizing is rather the desire among some monks merely to collect and accumulate books, allowing them to become useless objects. As he perceptively noted, such practice could lead the monks to turn the Word from a command to be fulfilled to a thing to be stored. . . . The process of reification of the Word is described this way: ‘The prophets wrote books. Then came our Fathers who put them into practice. Those who came after them learnt them by heart. Then came the present generation, who have written them out and put them into their window seats without using them [from the Greek anonymous collection].’ (p. 116)

Let this be a lesson to us bibliophiles!
Posted by Aaron Taylor at 12:00 AM

I'm not sure how you do it: every day, a keeper. However it happens, may it continue!

You are too kind, Despota. It's good to hear from you again.