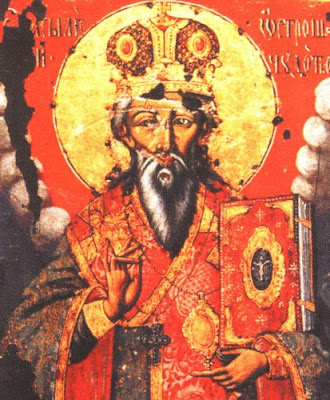 Today, 29 April on the Church’s calendar, we celebrate the memory of St Basil (1610-1671), Miracle-Worker of Ostrog and Metropolitan of Zahumlje. Born to a pious family and baptised ‘Stojan’, Fr Rogich writes that ‘from his early childhood he exhibited a gentle and meek spirit which would later guide him during the many trials of his life’ (Fr Daniel M. Rogich, Serbian Patericon: Saints of the Serbian Orthodox Church, Vol. I—January-April [Platina, CA: St Herman of Alaska Brotherhood, 1994], p. 311). The young Stojan was also distinguished by ‘a penetrating mind, along with an extremely great love and zeal for the Church, especially the Divine Services and the dynamic teachings of the great Fathers of the Church’ (p. 311). He was sent to the Zavala Monastery for ‘his education in both secular and religious subjects’ by his uncle, Abbot Seraphim (p. 311).

After finishing ‘grammar school’, the young man was tonsured a monk with the name ‘Basil’. ‘He led a strict ascetic life, keeping vigil and taming the passions by the use of the Jesus Prayer’ (p. 312). He was soon ordained deacon, and eventually priest in Trebinje, and served for a time in Cetinje under Metropolitan Mardarius. According to Fr Rogich, however, there St Basil was soon persecuted as a result of ‘a theological and pastoral dispute’ (p. 312):

In the early seventeenth century, especially in the southwestern Serbian territories of Primore, Hercegovina, and Montenegro, a proliferation of Uniate propaganda was disseminated by the Jesuits of Rome who hoped to convert the Serbs there to the Latin faith. Basil, then a priest at the diocesan residence of Metropolitan Mardarius in Cetinje, vehemently denounced this assault on the Orthodox faithful of these areas, all the while petitioning the Metropolitan to warn the people and to protect the faith. Mardarius, however, did nothing to combat these heretical propagandists. Furthermore, he ordered Basil back to the Monastery of the Dormition in Tvrdosh.

St Basil was forced to continue fighting the Uniates in secret, visiting Orthodox families and teaching and encouraging them. From the monastery in Tvrdosh, ‘He began a great biblical, spiritual, and liturgical renewal movement based upon increased participation in the liturgical and ascetical life of the Church. He was often seen going from house to house in Hercegovina preaching the Gospel of Christ to the Serbs’ (p. 314). Soon, St Basil’s ‘evangelical activities’ became so well known that his life was in danger, and he was forced to flee to Russia for a year or so. He returned for a brief time, bringing books and other gifts from Russia and founding an elementary school and a new church in Tvrdosh, but soon had to flee again, this time to the Holy Mountain.

St Basil spent a year at Hilandar, also visiting the various sketes and kellia to speak with the holy monks. ‘He learned much concerning the spiritual life in Christ which strengthened him and later came to his aid in facing his new challenge in life’ (p. 316), for upon his return to Serbia, he was consecrated Metropolitan of Trebinje at less than 30 years old. ‘Although young in age, he was nevertheless deemed most wise in spirit and in character, one who would be able to stem the tide of the difficulties in the southwestern territories of the Church of Serbia’ (p. 316). The newly consecrated bishop travelled all over his diocese, and it was at this time that he began to be renowned as a wonderworker. Furthermore, as a result of the terrible persecution of the Orthodox faith at the hands of the Uniates and the Muslim Turks, St Basil had to undertake the oversight of eastern Hercegovina, Zahumlje, and Onogoshka in addition to his own diocese. His home monastery of Tvrdosh was destroyed, and he was constantly threatened. But he was unafraid, for the words of the Psalmist truly applied to him, ‘The Lord is my light and my saviour; whom then shall I fear? The Lord is the defender of my life; of whom then shall I be afraid?’ (Ps. 26:1 LXX).

Finally, the holy hierarch decided with prayer and council to transfer the seat of his diocese to Ostrog Monastery, where he restored a small cell in which he lived for fifteen years. ‘The ascetic Basil spent his nights and days in prayer, fasting, vigil, fortifying his soul with countless bows and full-body metanoias. He did this in order to acquire the Holy Spirit of God Who led him and worked through him to perform virtuous deeds and miracles’ (p. 318). He also continued to visit the Orthodox faithful under his omophorion, ‘preaching the Word of God, healing the sick, setting free the spiritually captive, and fortifying the Orthodox in true worship and correct belief in the Lord Jesus Christ’ (p. 320). St Basil became a shining example and a source of tremendous grace to the suffering Serbian people. At last, at the age of 60, our holy Father Basil of Ostrog fell asleep in the Lord at his monastery. According to Fr Rogich, ‘Upon his death, his cell was flooded with an amazingly bright mystical light and was filled with a sweet aroma which fragranced the entire area. From the solid rock beneath his cell, a grapevine grew inexplicably and has healed many who have partaken thereof’ (pp. 320-1).

Since that time, the tomb and relics of the Saint have also been the instruments of many miracles. St Basil himself appeared in a dream to the abbot of another monastery seven years after his repose, expressing his will that his tomb be opened, and, ‘Upon opening the casket, Basil’s body was found completely intact, aglow, very warm and soft and smelling like Bosiljak (the herb basil)’ (p. 321). Fr Geoffrey Korz mentions in an article that St Basil has been a powerful intercessor for troubled youth in the former Yugoslavia (a fact reflected it would seem in his inclusion in Death to the World). He writes:

The saint has appeared to scores of the lost generation of post-Communist youth, insisting they visit his monastery, where he reposed centuries ago. Ironically, many of the pilgrims were not simply young Orthodox who had lapsed from their faith; most have been victims of the godless materialism of their age, enslaved to the alcohol, drugs, and sex that their post-Christian regimes offered as a temporary escape from inevitable oblivion. Seeing this catastrophic loss of a generation, Saint Basil appears to have taken their salvation as his own labour.

St Nicholas (Velimirović) has written a lovely ‘Hymn of Praise’ in honour of St Basil in the Prologue:

Saint Basil, one chosen by God,
And of every affliction, wondrous healer,
With the power of your Christ, Whom you greatly loved,
The gravest of the ill, you were able to heal,
Even now, for anyone who honors you, you are able [to do]
And who firmly believe in the Living God.
O glory of the Serbian people, do not cease to help,
For the sinful, do not cease to pray.
In heavenly glory, you are a saint of God
And saints are men with a full healthy spirit,
In you [Basil] we see a true man,
Free from sin and overly filled with healing,
In whom the fire of the Holy Spirit burns,
In whom the love of the resurrected Christ stands.
To the All-powerful God and to you, we are grateful,
Because through you, God pours out abundant mercy,
Through His saint, glorious and of angelic face—
Basil the Serbian, God's chosen one!