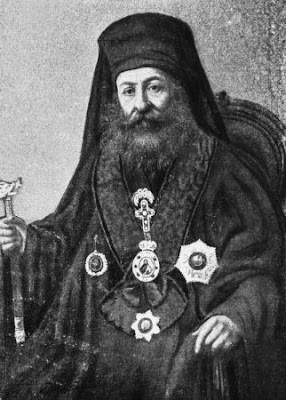 One of my more prized books, and perhaps the oldest in my collection (1856), is a volume called Monasteries of the East: Embracing Visits to Monasteries in the Levant, by the Hon. Robert Curzon, Jun. (NY: A.S. Barnes & Co., 1856). As Curzon explains in the Preface, the book is an ‘account of the most curious’ manuscripts he collected in the East, ‘and the places in which they were found, as well as some of the adventures which I encountered in the pursuit of my venerable game’ (pp. iii-iv). It is the very epitome of 19th-c. British attitudes to the ‘Orient’, and can thus be quite amusing. One of my favourite anecdotes concerns Curzon’s visit to the Patriarch of Constantinople in 1837. He begins as follows:

I had been for some time enjoying the hospitality of Lord and Lady Ponsonby at the British palace at Therapia, when I determined to put into execution a project I had long entertained of examining the libraries in the monasteries of Mount Athos. As no traveller had been there since the days of Dr Clarke, I could obtain but little information about the place before I left England. But the Archbishop of Canterbury was kind enough to give me a letter to the Patriarch of Constantinople, in which he requested him to furnish me with any facilities in his power in my researches among the Greek monasteries which owned his sway. (p. 282)

Thus armed, the inimitable Englishman proceeds to the Phanar, where he is received hospitably and the following exchange takes place (pp. 289-91):

When we had smoked our pipes for awhile, and all the servants had gone away, I presented the letter of the Archbishop of Canterbury. It was received in due form; and, after a short explanatory exordium, was read aloud to the Patriarch, first in English, aand then translated into Greek.

‘And who,’ quoth the Patriarch of Constantinople, the supreme head and primate of the Greek Church of Asia—‘who is the Archbishop of Canterbury?’

‘What?’ said I, a little astonished at the question.

‘Why, the Archbishop of Canterbury.’

‘Archbishop of what?’ said the Patriarch.

Here all my English friends and myself were taken aback sadly; we had not imagined that the high-priest before us could be ignorant of such a matter as the one in question. The Patriarch of the Greek church, the successor of Gregory Nazianzen, St John Chrysostom, and the heresiarch Nestorius, seemed not to be aware that there were any other denominations of Christians besides those of his own church and the Church of Rome. But the fact is that the Patriarch of Constantinople is merely the puppet of an intriguing faction of the Greek bankers aand usurers of the Fanar, who select for the office some man of straw who they feel secure they can rule, and whose appointment they obtaian by a heavy bribe paid to the Sultan; for the head of the Christian Church is appointed by the Mahomedan Emperor!

We explained, and said that the Archbishop of Canterbury was a man eminent for his great learning and his Christian virtues; that he was the primate and chief of the great reformed Church of England, and a personage of such high degree, that he ranked next to the blood-royal; that from time immemorial the Archbishop of Canterbury was the great dignitary who placed the crown upon the head of our kings—those kings whose power swayed the destinies of Europe and of the world; and that this present Archbishop and Primate had himself placed the crown upon the head of King William IV, aand that he would also soon crown our young Queen.

‘Well,’ replied the Patriarch, ‘but how is that? how can it happen that the head of your Church is only an Archbishop? whereas I, the Patriarch, command other patriarchs, and under them archbishops, archimandrites, and other dignitaries of the Church? How can these things be? I cannot write an answer to the letter of the Archbishop of—of—’

‘Of Canterbury,’ said I.

‘Yes! of Canterbury; for I do not see how he who is only an archbishop can by any possibility be the head of a Christian hierarchy; but as you come from the British embassy I will give my letters as you desire, which will ensure your reception into every monastery which acknowledges the supremacy of the orthodox faith of the Patriarch of Constantinople.’ (pp. 289-91)

A quick glance at the full list of Ecumenical Patriarchs revealed that the Primate in question was Gregory VI. Here is my translation of the Greek Wikipedia article on him:

Gregory VI (in the world George Phourtouniades) was an Ecumenical Patriarch.

He was born 1 March 1798 in the Phanar district of the Bosporus. In 1815, he was ordained deacon of the Metropolis of Derkai, taking the name ‘Gregory’. In 1825 he was made a great archdeacon of the Patriarchate by Patriarch Chrysanthus and, in the same year, was subsequently ordained great protosyngelos of the Metropolitan of Pelagonia. In August of 1833 he was chosen Metropolitan of Serres. After vehement debates and recriminations and with the backing of the guilds, he was elected Ecumenical Patriarch on 26 September 1835.

He was exceptionally moral and reverent, but tenacious in his ideas. He published canonical provisions which concerned marriage (arranged marriages, dowry), the education of monks, and dogmatic differences with the Catholic Church and the Protestants. He prohibited entombment in a church and condemned the translation of Holy Scripture into a simpler form of language.

He was dismissed by Sultan Abdülmecid I on 20 February 1840 and removed from his house in the Arnavutköy district. He was elected again 27 years later, after the resignation of Patriarch Sophronius on 10 February 1867 and resigned on 10 June 1871. He died on 8 June 1881. He was buried in the forecourt of the Church of the Bodiless Powers in Arnavutköy and in 1906 his bones were disinterred.

That Patriarch Gregory published decisions concerning the ‘dogmatic differences with the Catholic Church and the Protestants’ suggests to me that Curzon may be exaggerating his ignorance of the Church of England. But allowing for the possibility that he really was so uninformed, I got to thinking. It’s true that it would be preferable for the Ecumenical Patriarch to know something about those nations and religions that are most influential by worldly standards, but to me it is equally if not more significant that in England Curzon ‘could obtain but little information’ about the Holy Mountain, surely one of the most important places on Earth by spiritual standards. It is telling that the English were so convinced of the absolute centrality of the Church of England to Christendom, but hadn’t the faintest notion of the geography and spiritual life of the Garden of the Theotokos herself. Note too how Curzon attempts to demonstrate the importance of his Archbishop by pointing out his relatively close relationship to the wielders of worldly power, the purported ‘Christian virtues’ of the man (who was in fact a prominent Freemason) being hardly compelling to a Patriarch who has known holy ascetics and seen the sufferings of New Martyrs.

Basically, I hope that the story is true. In 1837 it may have seemed that the Phanar could not even hope to compete with Canterbury in ‘importance’. But it is not ‘the blood-royal’ that matters to the Lord, but purity of faith. By this standard, Patriarch Gregory VI was by far the more important.

...‘but how is that? how can it happen that the head of your Church is only an Archbishop? whereas I, the Patriarch, command other patriarchs, and under them archbishops, archimandrites, and other dignitaries of the Church?This reminds me of a similar statement about the response of one of 'the' Patriarch of Constantinople (in Nicea, at the time) to the claim of the Patriarch of Serbia to be a Patriarch. There was a long winded explanation about how there are only 5 Patriarchs because of the 5 senses, etc.

I wonder what Patriarch Gregory would say of the Archbishops of the Churches of Greece, Serbia, Cyprus, Albania, etc. who rule autocephalous churches? (And besides, isn't the official title of the Ecumenical Patriarch the 'Archbishop of Constantinople-New Rome'?

Well, of course Patriarch Gregory probably would have resisted the creation of the autocephalous churches, whether they were patriarchates OR archbishoprics. And it's easy to forget that you're Archbishop of Constantinople-New Rome when you're also 'Patriarch of the World'.

'Patriarch of the World', LOL.

It seems as if Rome's then mistaken definition of the title has carried the day with those that carry it.

thanks for postng about this!

the descriptions of the Greek Phanarioite politics sounds similar to the description given by MacGuckin in "The Orthodox Church".

If anyone wants a (digital) copy of their own it's available here: http://www.archive.org/details/visitstomonaster00curz

A similar interesting travelogue, but this time by an Armenian, can be found here: http://www.archive.org/details/churchesandmona00maqrgoog

The empire, Roman civilization, was the oikumene. "Ecumenical" was "civilizational."

Also remember that in the Turkish period the Ecumenical Patriarch was not simply a secularly powerless Patriarch of a church with ecclesiastical standing, but he was also the head of the Rum millet: the ethnarch of the entire Christian community within Turkish borders. He really could, in that role, order other bishops around, even ones that weren't "under" him ecclesiastically.

Likewise, the naive Englishman's misprision is somewhat charming, but more telling of typical English arrogance than anything else. Why should anyone know of Canterbury, really? Backwoods upstarts....

Interesting post. But I believe Patriarch Gregory was being deliberately disingenuous, and probably chuckling at the discomfiture of his guest and his--and His Grace of Canterbury's-- pretensions and assumptions. He surely knew that the Church of Cyprus, autocephalous since 431, was headed by an archbishop, and the Church of Sinai, though only "autonomous," was (and is) also. I would love to have been a fly on the wall, not only in this interview, but for the ensuing conversation between Gregory and his entourage afterwards.

'The irony is delicious.

In 1837, Canterbury was, at least, an actual place. But, not Constantinople.

Moreover, at that time, the Archbishop of Canterbury actually had jurisdiction or at least a serious moral and persuasive over millions of Christians. In contrast, Patriarch Gregory, perhaps thousands.

--Death Bredon
Byzantine pomposity simply knows no same -- either then or today!'

And here was my reply to the above:

But I took it less as Byzantine pomposity (a danger, certainly), and more as a case of honest and not entirely reprehensible ignorance. Sort of like a person not knowing who Marilyn Monroe is.'