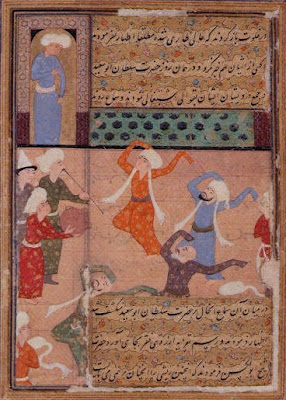 I recently linked to a translation of some passages from the writings of St Ignatius (Brianchaninov) wherein he writes, among other things:

The fruits of superstition are ruin. Such faith is condemned by God: it is the faith of idolaters in their idols, Muslims in their false prophet Mohammed and in the Qu'ran, heretics in their blasphemous dogmas and in their heresiarchs, and rationalists in their fallen human intellect. With this faith will the Antichrist be believed by his followers.

St Ignatius’s words notwithstanding, I will give this to the Muslims—they like to give away books, a result, perhaps, of their evangelistic zeal. I have been given a book each and every time I have ventured into a Muslim stronghold. The first time was when our tour group visited a Tatar mosque in Kazan. I received a slim volume in Arabic, the nature of which I still do not know. The second time was when my college class, ‘Religion in Contemporary America’, visited a mosque here in Oklahoma City. The imam (I suppose that’s what he was), gave us copies of Towards Understanding Islam, by Abul A’la Mawdudi (NY: The Message, 1996). Although it is much easier reading for me, I regret to say I still have not read it. Both of these books still sit on my shelf, side by side.

Which brings me to yesterday evening. I had noticed signs for some kind of celebration for the grand opening of something called ‘Raindrop Turkish House’ about a week ago, and when I had a free moment with the kids yesterday I decided to drop by and see what sort of place it was (I supposed it to be some kind of shop and/or café). A very friendly Turkish fellow met me at the door and informed me it was a cultural centre. He gave me a grand tour, mentioned they were offering classes in Turkish language and cooking, told me a bit about an inter-religious ecumenical group that met there, and gave me—that’s right—a book. It’s called Key Concepts in the Practice of Sufism: Emerald Hills of the Heart, 1, rev. ed., by M. Fethullah Gülen (Rutherford, NJ: Fountain, 2004).

I believe I had already heard of this Gülen when I attended a presentation on an academic trip to Turkey undertaken by some students and faculty of my alma mater, Oklahoma City University. I don’t know if I’ll get around to reading his book, but it’s true that I’ve meant to read something on Sufism for some time now. Being free, this one was cheaper than a book by Idries Shah I’d been eyeing at a local used bookshop for some time now.

Glancing through it a bit, it seems that the author often quotes poetry without mentioning the source. Here is one such excerpt (p. 114):

The suffering You cause is more pleasing than having fortune,
And Your vengeance is lovelier to me than my own soul.
I am in love with both His torment and His favor;
How strange it is that I am in love with things opposite to each other.
By God, if I go from this thorn of affliction to the garden of delight,
I will be one who, like a nightingale, always groans or sighs.
How strange it is that when a nightingale starts to sing,
It sings melodies of both the thorn and the rose.

Perhaps these passages are from Rumi, who seems to be considered the major Sufi poet.

As I’ve said, I may not agree with their religion, but I’m perfectly willing to accept free books from Muslims, and just maybe I’ll get around to reading them someday.

A busy life has meant I haven't been reading your daily pearls as often as I'd like to, but this was a most wonderful one to come back to. I attended a "Sufi" 'concert' [for want of a better word] locally, with whiring dervishes, andn it was a fascinating experience. There are differences, I do not deny, but a bit of understanding can go some way to better and full relationships: at least I hope and pray.

I'm glad you liked it, Ian. I was worried this one was going to be controversial, either with Orthodox who can't imagine why I'd own or read Muslim books, or with ecumenists or even Muslims who would stumble across it and wouldn't like the quote from St Ignatius!

It's funny you should consider your post potentially controversial; the thing which struck me most about it was your description of your encounters with actual muslims, which sounded uniformly cordial, causing me to question my own ability to put my criticism aside in such situations, where there was perhaps a slight undercurrent of 'proselytizing', and deal in as friendly and fair a manner as you have. While I know Islam is a false religion, and probably demonically inspired, I try to apply St. Paul's words about those who, without the law, have yet followed the law written in their hearts, to those individual muslims, who in spite of their false beliefs, yet have a true innate yearning for God, and also perhaps, live more in accord with virtue than I myself often do. I think apart from the great falsehood in Islam, conceding that there are true elements within it, and working from that basis, (with individual muslims, mind you- organized'Ecumenical' movements will only yield unhealthy compromises- may perhaps win some to Christ, and I congratulate you on being (from the sounds of it) a dispassionate witness for Christ, though perhaps not overtly, in a difficult situation. Glory to God!

I am Yudhie from Indonesia. Actually, I have been reading your postings and this blog since about a month ago! This has been a great blessing for me! I am very enthusiastic with this blog, and hence I added this to my favorite blog list!

And for this posting, this is very unique, and the funny thing is I can hardly find this case in Indonesia :). However I am very familiar of the 'evangelistic mission' of them, especially through marriage with young-Christians...

Please, pray for us Indonesian Orthodox Christians... Thanks!

Aaron, your wife and I know each other from UCO, we both studies under Dr. Zhu. I'm Muslim and I didn't find your post offensive. We are each entitled to believe however we choose to believe. I have read several books by M. Fetullah Gulen, and I highly recommend them.

It is interesting that St. Ignatius has somewhat linked Islam with "rationalists in their fallen human intellect".

This is not the first time I see an Orthodox pointing out that Islam has a rationalist basis. For example, this is what Ivan Kireyevsky said on Islam (emphasis are mine):

"Reason's disintegration into particular faculties, this predominance of rationality over the other activities of the spirit, would ultimately destroy the entire edifice of European medieval civilisation; yet in the beginning it had an opposite effect, and the more one-sided it became, the quicker was the development that resulted. For such is the law of the deviation of human reason: the appearance of brilliance is accompanied by inner darkness.

Arab civilisation evolved even more rapidly, for it was even more one-sided, though it exhibited the same abstract rationalistic tendency as did medieval Europe. It was easier for Muhammadan culture to turn its basic convictions into logical formalism than it was for Christian culture, which was essentially living and integral. The systematic linkage of abstract concepts was the highest goal that Muhammadan intellectual consciousness of self could attain to, and it may be said to have formed the very basis of Muhammadan faith. It demanded of Muhammadans only the abstract recognition of certain historical facts and the metaphysical recognition of the oneness of God, but it did not require an integrated wholeness of self-consciousness, thereby calmly allowing a disjointed human nature to persist in its unreconciled duality. It did not indicate to them the supreme purpose of being but, on the contrary, offered them a state of gross sensual pleasures, not only as the greatest reward of life on earth, but even as the highest aim of the afterlife.

Consequently, the scope of Muhammadan intellectual requirements was limited to the need for abstract logical unity, for bringing thoughts into a superficial order and correctly establishing systematic interrelations among them. The supreme metaphysical problem that the inquiring Muhammadan mind could set itself — the very poetry of the Muhammadan's philosophy — consisted in evolving tangible formulas for the intangible activities of the spiritual world, in searching for the talismanic link between the laws of the supercelestial world and those of the sublunar world. Hence their passion for logic; hence their astrology, alchemy, chiromancy, and all their abstract-rationalistic and sensual-spiritual disciplines. This also explains why, although Arabs had borrowed their civilisation from Syrian East Romans and maintained close relations with the Eastern Roman Empire, they exerted almost no influence on the evolution of East Roman culture.

Their impact on Western Europe, however, was particularly great, because they brought it the brilliance of their flourishing knowledge at the very time Europe lived in almost total ignorance. There can be no doubt that the abstract-logical tendency of their learning helped to strengthen the same tendency in European learning. And, though for only a short while, the vari-coloured stream of their talismanic speculations mingled with the dominant current of European thought. They were the first to acquaint the Latin theologians with the works of Aristotle, which first became known to them in translation from the Arabic, with Arabic commentaries — so unfamiliar to them was Greek civilisation by this time."

Anonymous> I suppose I have fared rather well with Muslims. I’ve been nowhere near as dispassionate with Jehovah’s Witnesses, however!

Yudhie> Thank you so much for commenting! I’m glad you like the blog. I suppose you are rather embattled there in Indonesia, and adherents of any religion are apt to behave very differently when they are a vast majority than when they are a minority toward whom there is a great deal of suspicion. Muslims in the US (or in Russia!) would be seriously hurting their cause by not being friendly. In Indonesia, they have nothing to fear. I will indeed remember you all in my prayers. (By the way, is ‘Yudhie’ your Orthodox name? If so, who is your Saint?)

Bobbi> It’s great to hear from you! So nice to get a response from another friendly Muslim, and to know that you’re not offended. I’m also glad to get your recommendation of Gülen’s books. I only know the barest minimum about the different groups within Islam, and the way it struck me at the OCU presentation I attended was that Gülen almost seemed like he might be a bit of an oddball in the Muslim world. If that’s not the case, I’ll feel more like I’m getting the authentic deal from him. By the way, I thought your hijab post was really interesting.