'Inaccessible in Virtue'—St Athanasius the Great 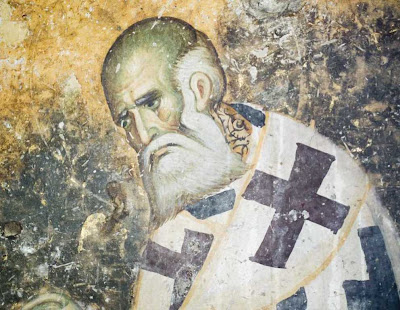 From the circumstances of the time he received a further training, more precious than anything the fondest parent could have planned. February 303 saw the beginning of the last and greatest persecution, after forty years of peace; and this, both in its inception under Diocletian and in its recrudescence under Maximin, was particularly severe in Egypt. The Church of Alexandria, already so rich in martyrs, became richer yet; and among them were many whom Athanasius knew, men and women from whom he had learned the Catholic faith and a loving intimacy with Holy Scripture, children with whom, probably, he had worked and played. . . . All through the most impressionable years of his childhood he had not only learnt the Christian faith, he had seen it in action. He had faced the possibility of martyrdom for himself; and he had made his own the faith for and by which the martyrs died—the faith of the Creator-Word Incarnate, the crucified and risen, the living and triumphant Christ. (p. 18)

Indeed, for St Athanasius, the courage and faithfulness of the Christians in the face of the persecution is itself a ‘very strong proof’ of this faith, for ‘the marvel of marvels is that he who is enfolded in the faith of the cross despises this natural fear and for the sake of the cross is no longer cowardly in face of it’ (pp. 57, 58). It is this experience of the faithfulness of Martyrs that enabled St Athanasius himself, first, to oppose paganism, as we see in his treatise ‘On the Incarnation’. As Charles Williams tells it (‘Augustine and Athanasius’, The Image of the City and Other Essays, ed. Anne Ridler [London: Oxford U, 1970], p. 91):

‘All this fantasy’, says Athanasius, of oracles and magic and inspirations, ‘has ceased’ . . . ‘I do not mean to sound arrogant; I do not want to seem rude; it is not I who say so; but all this fantasy of yours has ceased. Incorruption exists; this is it. Smell, look, taste, handle: this is creation made new.’

The witness of the Martyrs also strengthened St Athanasius to stand firm and hold fast to the faith they had passed on even when his opponents were supposed Christians, i.e., when it really became Athanasius contra mundum. Fr Georges Florovsky sees this as truly key to St Athanasius’s approach—‘It was imperative for the Orthodox to appeal to the mind of the Church, to that ‘Faith’ which had been once delivered and then faithfully kept. This was the main concern, and the usual method, of St Athanasius’ (‘The Function of Tradition in the Ancient Church’, Bible, Church, Tradition: An Eastern Orthodox View, Vol. I in The Collected Works of Georges Florovsky [Vaduz: Büchervertriebsanstalt, 1987], p. 80). St Athanasius’s tenacity in abiding by this Faith is truly legendary. As G.K. Chesterton has written, ‘The truth is that the trumpet of true Christianity, the challenge of the charities and simplicities of Bethlehem or Christmas Day, never rang out more arrestingly and unmistakably than in the defiance of Athanasius to the cold compromise of the Arians’ (The Everlasting Man [SF: Ignatius, 2008], p. 228). In C.S. Lewis’s words, ‘It is his glory that he did not move with the times; it is his reward that he now remains when those times, as all times do, have moved away’ (St Athanasius, p. 9).

But St Athanasius was further strengthened by the spirituality of desert monasticism, which really began to develop when the persecutions stopped and on which St Athanasius literally ‘wrote the book’. According to his Life of St Anthony, ‘And when at last the persecution ceased, and the blessed Bishop Peter had borne his testimony, Antony departed, and again withdrew to his cell, and was there daily a martyr to his conscience, and contending in the conflicts of faith’ (VA 47, here). Commenting on this passage, William Harmless observes, ‘Athanasius claims, in essence, that Anthony was inventing a new style of martyrdom, the “daily” martyrdom of asceticism; and the athletic and military metaphors once applied to the martyrs would now be applied to Antony, that he did “battle” in the “contests of faith”’ (Desert Christians: An Introduction to the Literature of Early Monasticism [Oxford: Oxford U, 2004], pp. 65-6).

I would note as well that while Fr Andrew Louth has called St Athanasius ‘anti-mystical’ (The Origins of the Christian Mystical Tradition, From Plato to Denys [Oxford: Clarendon, 1981], p. 78), Olivier Clément has rightly observed, ‘For Athanasius, to say that Christ is fully God is to make possible the deification of humanity [emphasis mine]’ (The Roots of Christian Mysticism: Text and Commentary, trans. Theodore Berkeley OCSO, rev. Jeremy Hummerstone [London: New City, 1995], p. 312).

Furthermore, we would do well to note St Athanasius’s ‘famous’ (Harmless, p. 64) description in VA 14 of St Anthony emerging from the desert fort where he’d been struggling in solitude: ‘After this, when many were eager and wishful to imitate his discipline, and his acquaintances came and began to cast down and wrench off the door by force, Antony, as from a shrine, came forth initiated in the mysteries and filled with the Spirit of God’ (here). In the initiation into ‘mysteries’ and filling ‘with the Spirit of God’, not only do we thus have what is surely a ‘mysticism’, if we wish to use that word, not only do we have a clear witness that the ‘mysteries’ are not something tied exclusively to one’s clerical or liturgical order, but we have the very basis on which the true theologian is able to interpret the Scriptures and defeat the heretics. We have the σκοπὸν τῆς πίστεως, the ‘scope of faith’, to use St Athanasius’s expression (see Fr Florovsky, p. 81). For here is how the holy Hierarch himself explains the method of the Saints (St Athanasius, p. 96):

But for the searching and right understanding of the Scriptures there is need of a good life and a pure soul, and, for Christian virtue to guide the mind to grasp, so far as human nature can, the truth concerning God the Word. One cannot possibly understand the teaching of the saints unless one has a pure mind and is trying to imitate their life. . . . Similarly, anyone who wishes to understand the mind of the sacred writers must first cleanse his own life, and approach the saints by copying their deeds. Thus united to them in the fellowship of life, he will both understand the things revealed by God and, thenceforth escaping the peril that threatens sinners in the judgment, will receive that which is laid up for the saints in the kingdom of heaven.

Having just excerpted an important and telling passage from St Athanasius's own writings, I shall conclude with another passage from St Gregory the Theologian’s ‘Oration’ on the holy Hierarch. According to St Gregory—

he was sublime in action, lowly in mind; inaccessible in virtue, most accessible in intercourse; gentle, free from anger, sympathetic, sweet in words, sweeter in disposition; angelic in appearance, more angelic in mind; calm in rebuke, persuasive in praise, without spoiling the good effect of either by excess, but rebuking with the tenderness of a father, praising with the dignity of a ruler, his tenderness was not dissipated, nor his severity sour; for the one was reasonable, the other prudent, and both truly wise; his disposition sufficed for the training of his spiritual children, with very little need of words; his words with very little need of the rod, 1 Cor. iv. 21., and his moderate use of the rod with still less for the knife.

I like how St Athanasius kind of looks like he has a neck tattoo in this fresco.

Sorry everyone, I hope this post is at least semi-coherent. I was awfully sleepy when I wrote it.