The Venerable Sinaites of Serbia 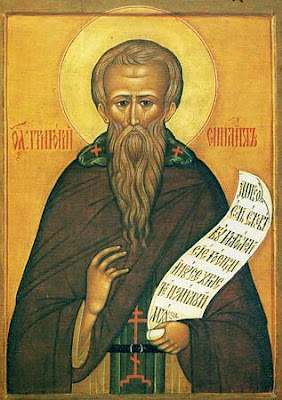 I suppose, knowing that St Gregory of Sinai himself, the last named of the group (if this does not refer to another Gregory), really was from Sinai, and remembering that at least Romil and Romanos were his direct or indirect disciples, I might have surmised that here the term ‘Sinaites’ is referring to a group of hesychastic disciples of St Gregory of Sinai. But still, it was neat to have only just come across a reference to them in an article I had long planned to read but finally acquired only last Thursday: Anthony-Emil Tachiaos’s ‘Gregory Sinaites’ Legacy to the Slavs: Preliminary Remarks’, Cyrillomethodianum 7, 1983, pp. 113-65. I shall simply give in full the paragraph where Tachiaos explains the background to the ‘Venerable Sinaites of Serbia’:

We have specific evidence that Gregory of Sinai’s Hesychast spirituality penetrated into Serbia from the Life of Romylos the monk, a testimony that goes back to the time of Prince Lazarus (1371-1389). Romylos was born in Vidin of a Greek father and a Bulgarian mother. At an early age he became a monk in the Monastery of the Hodegetria in Tirnovo, and it was while he was there that he heard about Gregory of Sinai, who was then in Paroria for the second time. Struck by Gregory’s wide renown and in the face of his abbot’s objections, Romylos went to Paroria and was accompanied by another monk, named Hilarion. There they remained until Gregory’s death in 1364, after which they want to Zagora in the district of Tirnovo. The rest of Romylos’ life is a saga of ceaseless wandering. He returned to Paroria, as Gregory’s biographer also did from Constantinople, and later the two of them, with Hilarion, set off once more for Zagora. But again they did not remain there long, and we see them moving backwards and forwards between Paroria, Zagora and Athos. They stayed on Athos for a fairly lengthy period. To begin with, Romylos lived in the Melana region, near Lavra Monastery, subsequently moving to the foot of Athos mountain, where his disciple and biographer Gregory helped him to build a cell. he lived a hermit’s life there until the death of the despot John Uglješa in 1371, which was followed by a Turkish attack on Mount Athos. This sent Romylos to the town of Valona on the Adriatic coast, where he lived for a short time; but later, disappointed by the low moral standards prevailing there, he set off with his disciples for Serbia. He selected the environs of Ravanica Monastery for his place of ascesis, a monastery founded by Prince Lazarus in 1376 or 1377. It would seem that, since Ravanica Monastery had maintained close relations with Mount Athos from the time of its foundation, it offered Romylos a familiar environment. It was also his last home. After his death, his pupil and biographer Gregory went to Serbia, where, together with the monks who went with him, he settled in Gornjak Monastery, which Prince Lazarus had set apart especially for him. There Gregory built up a monastic centre of upholders of Gregory of Sinai’s Hesychast tradition, and these monks became known in Serbian history as ‘Sinaites’. It may have been due to these Hesychasts that during the time of Prince Lazarus the elements of Byzantine Orthodoxy gained strength in the spiritual life of Serbia, whereas western trends suffered the opposite effect. Thus the Hesychast mystic tradition of Gregory of Sinai came into Serbia during the time of Prince Lazarus, and to a probably limited extent. As a dogma and philosophical conviction, on the other hand, Hesychasm prevailed utterly in the Serbian Church during the XIVth century.

Incidentally, I came across a passage in Tachiaos’s article that reminded me a bit of Elizabeth Kostova’s vampire novel, The Historian (NY: Back Bay, 2006), which I’ve a mentioned a time or two. Tachiaos, an historian no less (!), quotes a study by G. Gorov entitled ‘Местонахождението на средневековната Парория и Синаитовия монастир’ in Исторически преглед, 28.1 (1972), p. 75:

Paroria is none other than the frontier mountain range of Bosna-Živak-Ugraš-Hadzijka Athman in present-day Inner Strandža, and . . . the Sinaite’s monastery was on the site of the present-day chapel of Sveta Petka (Balaklija), in the locality of Manastirăt, on the right-hand bank of the mountain river Zaberska reka, between the villages of Zbernovo and Kalovo. (qtd. in Tachiaos, p. 117)

The interesting thing is that the ‘Sveti Georgi’ monastery that the charactres in The Historian are looking for is gone, and its old church has now become ‘the Church of Sveti Petko the Martyr’ (the more recent name is mentioned in p. 568, the revelation of its former identity on p. 586; it would take some serious rereading to determine, but there may also be a demonstrable geographic link involving, among other things, the river Gorov mentions). A search for ‘Saint Petko’ turned up the following from this website:

There is another, parallel line in the meaning of Saint Petka’s day [in Bulgaria]. According to popular belief, there is a male-saint by the same name—Saint Petko, who is patron of this day. This saint takes the guise of a wolf—probably a leftover from the ancient cult of the wolf as a sacred animal. Saint Petka’s day, and the whole month of October as well as November are considered to be a transition from autumn to winter. That is why people in villages harboured great fears about the coming months of snow and cold. Winter was regarded as the time of wild animals. In their honour, these transition months are rich in long ritual periods and all kinds of days—like Beast days, Wolf days, Mouse days. Bear days. In the past, people were acutely aware of the presence of forest beasts. And the rituals and feast days, preceding the winter were a magic charm to ward off these fears. Through ritual taboos and sacrifices, the animals of danger to man were neutralized and sent far away.

It is also worth noting that the protagonists are assisted in attempting to locate Sveti Georgi by a pious Bulgarian scholar—Anton Stoichev—with an expertise in the wanderings of 15th-c. (not 14th-c., since it had to coincide with the end of Vlad’s life) Orthodox monks. Perhaps Stoichev owes something to Gorov? Unfortunately I know nothing about the latter!
Posted by Aaron Taylor at 10:47 PM