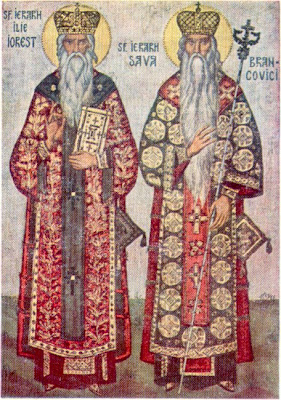 Today, 24 April on the Church’s calendar, we celebrate the memory of the Holy Hierarchs Iorest (or ‘Ilie Iorest’) and Sava Brancovici the Confessors, Metropolitans of Ardeal (Transylvania). St Iorest, born ‘Elias’ or ‘Ilie’, came from a Transylvanian peasant family and was tonsured a monk at the 15th-c. Putna Monastery, a foundation of St Stephen the Great of Moldavia. According to Fr Ioanichie (Bălan), in Romanian Patericon: Saints of the Romanian Orthodox Church, Vol. 1—3rd to 18th Centuries (Platina, CA: St Herman of Alaska Brotherhood, 1996), p. 322:

Attending the spiritual school at this lavra, he became a skilled monk and a good calligrapher and iconographer. He was zealous for the service of the Church and the preservation of the holy Orthodox Faith. For the purity of his heart the abbot made him a hieromonk, and St Iorest was as a burning torch in the community of fathers, performing the sacraments with the fear of God and consoling the people with choice Christian teachings.

In 1641 the holy monk’s renown brought him to the attention of the Moldavian Prince, Basil Lupu, and he was consecrated Metropolitan of Ardeal (Transylvania) at Alba Iulia. At that time Calvinism was a very real problem in Transylvania, and St Iorest struggled to protect his flock against this heresy. He travelled frequently to all of the villages, ordaining ‘zealous priests’ (p. 322) and establishing new churches. Finally, he was thrown in prison by the heretics, where he was beaten and abused. As Fr Ioanichie writes, ‘The Saint endured martyrically, being ready to give his life for the defense of the Orthodox faith and the salvation of his flock’ (p. 323). He was held for nine months before being fined and finally released.

St Iorest eventually returned to Moldavia, where he served the faithful as Bishop of Huşi from 1656-1657 and was honoured as a loving shepherd. ‘Then he gave his soul in peace into the arms of the Great Archpriest Jesus Christ, being numbered in the choir of holy Confessors’ (p. 323).

St Sava Brancovici had a very similar experience. He was baptised Symeon, growing up in a pious family near Inău. According to Fr Ioanichie, ‘After he had studied books and learned the order of the services of Comana Monastery, he became a protopriest and celebrant of the Church of Christ in his native village, performing the sacraments with great zeal and fear of God’ (p. 350). It was after the death of his wife that St Sava was chosen as Metropolitan of Ardeal, being tonsured a monk at the cathedral in Tîrgovişte, consecrated bishop, and enthroned at Alba Iulia. In Transylvania, St Sava too had to face the Calvinist heresy. As Fr Ioanichie writes (p. 350):

For the twenty-four years that he was Metropolitan, St Sava courageously confessed the right faith, combatted the erroneous Calvinist teachings, strengthened the unity of the Romanians around the Orthodox Church, erected numerous houses of prayer in the villages and cities, appointed devoted priests, and consoled the Ardelean peasants, strengthening them in faith and hope.

But the evil one was plotting against him. The king of Transylvania, who was encouraging the spread of Calvinism, made false accusations against St Sava and threw him into prison. There, ‘for three years the hierarch was persecuted, beaten with rods, mocked, and martyrically tortured for the true faith, being pressured to accept Calvinism’ (p. 351). Thanks to God, though, this holy Confessor endured all and defended true Christianity. He was released in 1683, but was so crippled by torture that he fell asleep in the Lord shortly thereafter. ‘For the holiness of his life the faithful numbered him in the choir of the Saints even during his lifetime’ (p. 351).
Posted by Aaron Taylor at 12:18 PM

it is quite amazing how the Orthodox faith stayed the majority faith in Transylvania, in spite of the persecution it suffered at the hands of both Catholics and Protestants, in spite of the Orthodox having almost no voice with the Hungarian or Habsburg authorities.
Although the Principality of Transylvania gets sometimes the praise of having been a very tolerant state in the 16th and the 17th centuries, because the Unitarian sect was given here the status of a "religio recepta" , it is highly ironic that such a tolerant state would only grant the insulting status of a"religio tolerata" to the majority religion, at the same time. But Unitarianism, Catholicism, Calvinism and Lutheranism were all Hungarian, German and Szekel religions, while the Orthodox religion was "Vlach", that is Romanian.
Not even Uniatism, although it fared far better tan all previous attempts at conversion, won, in the long run, a majority status among the Transylvanian peasantry.

Thank you for this comment. I admit that as little as I know about Wallachian history, I know even less about the history of Transylvania. This is quite interesting.