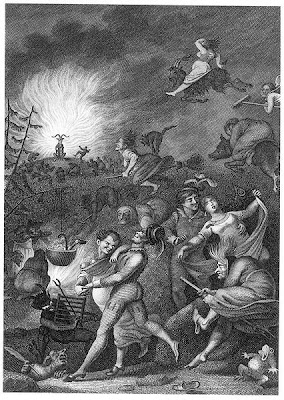 I became rather frustrated last night when my Walpurgisnacht post began to get out of hand and I was unable to say all that I wished about the subject. As was mentioned in a passage cited from Leslie Klinger’s The New Annotated Dracula (NY: Norton, 2008), p. 504, n. 4, Walpurgis Night was once believed to have been a witches’ festival. This belief is depicted perhaps most memorably in Johann Wolfgang von Goethe’s verse play, Faust. In ‘The First Part of the Tragedy’, ll. 3835-4222 depict Mephistopheles’s and Faust’s participation in the famous Walpurgisnacht Sabbat on the Brocken, in the Harz Mountains in Germany (see Goethe’s Faust, trans. Walter Kaufmann [NY: Anchor, 1990], pp. 358-87). A ‘Witches’ Chorus’ at one point (ll. 3956-60, p. 367) sings:

The witches ride to Blocksberg’s [Brocken’s] top,
The stubble is yellow, and green the crop.
They gather on the mountainside,
Sir Urian comes to preside.
We are riding over crag and brink,
The witches fart, the billy goats stink.

I must say, it’s exceptionally bright [das war recht klug gemacht]
To wander to the Blocksberg in the Walpurgis Night,
To isolate ourselves to follow out some whim.

On the subject of Faust, Jaroslav Pelikan claims to have read it ‘every year since I was in secondary school and through such reading have committed large chunks of its German to memory’ (Faust the Theologian [New Haven, CT: Yale U, 1997], p. ix). Somewhere, it seems to me, he also said it was the greatest masterpiece of world literature, or something. Kaufmann, whose opinion I don’t respect quite as much, settles for saying, ‘Goethe is generally recognized as the greatest German of all time, and Faust as his most important single work’ (Introduction, p. 3).
The illustration is Johann Heinrich Ramberg's, 'Walpurgisnachtszene aus Faust 1' (1829).
Posted by Aaron Taylor at 4:44 PM