'Her Good Conversation & Her Faith Unfeigned'—St Monica of Tagaste 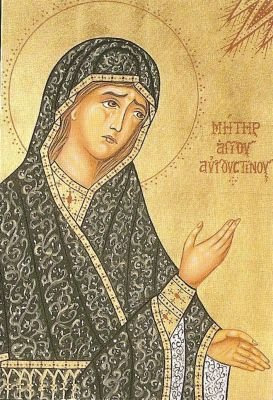 Today, 4 May according to the Church’s calendar, we celebrate the memory of St Monica of Tagaste (†387), the mother of St Augustine. I can’t help but have a special veneration for St Monica, whose son was so troubled and lost for so many years, because of what I put my own mother through when I was a teenager. Similarly, I believe that it was in large part through her prayers that I was delivered from the darkness of those years, for as St Ambrose told St Monica, ‘Go thy ways and God bless thee, for it is not possible that the son of these tears should perish’ (St Augustine, Conf. III.xii.21; The Confessions of St Augustine, trans. E.B. Pusey [Mt Vernon, NY: Peter Pauper, n.d.], p. 55). So I would like to post what, to me, is one of the most moving passages in the Confessions, St Augustine’s conversation with his mother in Conf. IX.x just before her repose.

The day now approaching whereon she was to depart this life (which day Thou well knewest, we knew not), it came to pass, Thyself, as I believe, by Thy secret ways so ordering it, that she and I stood alone, leaning in a certain window, which looked into the garden of the house where we now lay, at Ostia; where removed from the din of men, we were recruiting from the fatigues of a long journey, for the voyage. We were discoursing then together, alone, very sweetly; and forgetting those things which are behind, and reaching forth unto those things which are before, we were enquiring between ourselves in the presence of the Truth, which Thou art, of what sort the eternal life of the saints was to be, which eye hath not seen, nor ear heard, nor hath it entered into the heart of man. But yet we gasped with the mouth of our heart, after those heavenly streams of Thy fountain, the fountain of life, which is with Thee; that being bedewed thence according to our capacity, we might in some sort meditate upon so high a mystery.

And when our discourse was brought to that point, that the very highest delight of the earthly senses, in the very purest material light, was, in respect of the sweetness of that life, not only not worthy of comparison, but not even of mention; we raising up ourselves with a more glowing affection towards the ‘Self-same’, did by degrees pass through all things bodily, even the very heaven whence sun and moon and stars shine upon the earth; yea, we were soaring higher yet, by inward musing, and discourse, and admiring of Thy works; and we came to our own minds, and went beyond them, that we might arrive at that region of never-failing plenty, where Thou feedest Israel for ever with the food of truth, and where life is the Wisdom by whom all these things are made, and what have been, and what shall be, and she is not made, but is, as she hath been, and so shall she be ever; yea rather, to ‘have been’, and ‘hereafter to be’, are not in her, but only ‘to be’, seeing she is eternal. For to ‘have been’, and to ‘be hereafter’, are not eternal. And while we were discoursing and panting after her, we slightly touched on her with the whole effort of our heart; and we sighed, and there we leave bound the first fruits of the Spirit; and returned to vocal expressions of our mouth, where the word spoken has beginning and end. And what is like unto Thy Word, our Lord, who endureth in Himself without becoming old, and maketh all things new?

We were saying then: If to any the tumult of the flesh were hushed, hushed the images of earth, and waters, and air, hushed also the pole of heaven, yea the very soul be hushed to herself, and by not thinking on self surmount self, hushed all dreams and imaginary revelations, every tongue and every sign, and whatsoever exists only in transition, since if any could hear, all these say, We made not ourselves, but He made us that abideth for ever—If then having uttered this, they too should be hushed, having roused only our ears to Him who made them, and He alone speak, not by them, but by Himself, that we may hear His Word, not through any tongue of flesh, nor Angel’s voice, nor sound of thunder, nor in the dark riddle of a similitude, but might hear Whom in these things we love, might hear His Very Self without these (as we two now strained ourselves, and in swift thought touched on that Eternal Wisdom which abideth over all);—could this be continued on, and other visions of kind far unlike be withdrawn, and this one ravish, and absorb, and wrap up its beholder amid these inward joys, so that life might be for ever like that one moment of understanding which now we sighed after; were not this, Enter into thy Master’s joy? And when shall that be? When we shall all rise again, though we shall not all be changed?

Such things was I speaking, and even if not in this very manner, and these same words, yet, Lord, Thou knowest that in that day when we were speaking of these things, and this world with all its delights became, as we spake, contemptible to us, my mother said, ‘Son, for mine own part I have no further delight in any thing in this life. What I do here any longer, and to what end I am here, I know not, now that my hopes in this world are accomplished. One thing there was for which I desired to linger for a while in this life, that I might see thee a Catholic Christian before I died. My God hath done this for me more abundantly, that I should now see thee withal, despising earthly happiness, become His servant: what do I here?’ (Pusey, pp. 178-82)

On the ninth day then of her sickness, and the fifty-sixth year of her age, and the three-and-thirtieth of mine, was that religious and holy soul freed from the body. . . . For we thought it not fitting to solemnise that funeral with tearful lament, and groanings; for thereby do they for the most part express grief for the departed, as though unhappy, or altogether dead; whereas she was neither unhappy in her death, nor altogether dead. Of this we were assured on good grounds, the testimony of her good conversation and her faith unfeigned.


As I have mentioned previously, the infallible Adalbert de Vogüé has drawn a fascinating contrast between St Augustine’s account of his mother’s last conversation with him and her repose, and those of St Benedict with his sister in St Gregory the Great’s Dialogues (see St Gregory the Great, The Life of St Benedict, comm. by Adalbert de Vogüé, trans. Hilary Costello and Eoin de Bhaldraithe [Petersham, MA: St Bede’s 1993], pp. 155-62).
Posted by Aaron Taylor at 3:37 PM