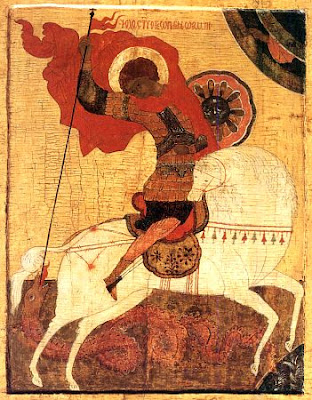 In the interests of thoroughness, I’ve decided to post three more St George-related items, sort of postscripts to the previous posts. The first is the passage from the article ‘The Theological Writings of Archbishop John [Maximovitch] and the Question of “Western Influence” in Orthodox Theology’ by Fr Seraphim (Rose) (The Orthodox Word, Vol. 30, Nos. 2-3 [175-6], March-June 1994, pp. 142-158), which I had half-remembered in the course of this post (the nun was another story, it seems), and the source of which Ручьёв of Incendary graciously recalled to my attention. Here then, is what Fr Seraphim had to say about St George’s dragon:

We read in the Lives of Saints that a dragon came and began tempting the Saint, like St Marina and St John the Much-Suffering. What are we to think of this? You read this text to people who live here in Platina or San Francisco or anywhere in the modern world, who are not totally raised in the spirit of Orthodox piety, and they will tend to laugh at you. You try to give an explanation: ‘Well, there really were dragons’, and they say, ‘Oh, don't fool us, you're making up things. This is superstition. You mean you really still believe that?’ What do you answer them? Or if any of your children read at home the life of a saint and then go to school and talk about it, the people there will laugh them to death. ‘You mean you read these silly stories?’ they will say. ‘Dragons occurring with big smoke?’ In the Lives of Saints, the hair of St Marina and the beard of St John the Much-Suffering are actually singed by the dragon with fire coming out of his mouth. How are you to understand that? St Marina was in prison; how did the dragon get by the guard, how did he get through the locked door? What's going on? Is there such a thing as a dragon in the first place? If you are very simple in your faith, you will say, ‘Well, I believe it because that's what the Holy Fathers handed down to me.’ And they will say, ‘Oh yes, but you have to gather the writings of the Holy Fathers and correct them and throw out things like that.’ And in fact, if you look at the Roman Catholic Church today, you see that they do exactly that. They think that St Nicholas or St George do not even exist; they throw them out because they say this is superstition. (pp. 150-1)

On the contrary, now a person who reads stories about dragons will be very good about finding out the Patristic teaching on this: how it is that a devil who is immaterial can singe a beard. We know that, according to St Macarius the Great and other Fathers, the devil is not entirely immaterial. Only God is immaterial; and the devils and angels have actual bodies, although they are much more refined than our bodies. That, of course, was the case with those dragons which tortured St Marina and St John the Much-Suffering. They were not beasts, but were demons who took forms in order to frighten ascetics. We know this for various reasons, especially because when the Saint made the sign of the Cross or prayed, the dragon disappeared. It is obvious that this was an apparition of the demons.

There are other cases, such as the dragon of St George, in which it looks like a real dragon was involved, some kind of real beast. Such beasts have existed; in fact there are records of them. Even recently—thirty years ago in Monterey—one was dragged up on the beach: a very unusual beast resembling what we would call a ‘sea monster’ [here is a brief mention of this]. This, then, is a different matter, when there are actual beasts which do not disappear when you make the sign of the Cross and when you actually drag their bodies through the streets as St George did. (p. 153)

The next post [here] will be a follow-up to my earlier ‘Eve of St George’s Day’ post, touching on the rôle of St George and his feast in vampire literature and the date of the feast on the calendar.
Posted by Aaron Taylor at 12:00 AM