'The City Had a Saintly & Sanctified Bishop'—St Erkenwald of London 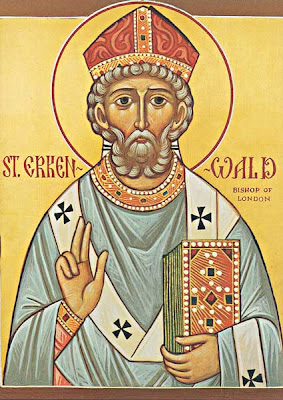 Owing to my spending most of the day yesterday going to Dallas, at the liturgy and lunch in Dallas, and coming back from Dallas, I didn’t have the time to do a proper post on one of the other Saints of the day, St Erkenwald of London (†690). Nor do have the time for it today. I did, however, want at least to post something. One can find a brief overview of his life here, but of course my primary acquaintance with St Erkenwald is through the truly fascinating Middle English alliterative poem of 1386 entitled after him, and believed to have been written by the Sir Gawain poet (The Owl and the Nightingale, Cleanness, St Erkenwald, trans. and intro. Brian Stone [Harmondsworth, UK: Penguin, 1971]). The first stanza reads (p. 28):

At London in England not a long time after
Christ suffered on the cross and established Christendom,
The city had a saintly and sanctified bishop;
And it happened that Erkenwald was the holy man’s name.

Recalling for me some of the ideas of Charles Williams (In ‘Williams and the Arthuriad’, Lewis writes, ‘On many of us the prevailing impression made by the London streets is one of chaos; but Williams, looking on the same spectacle, saw chiefly an image—an imperfect, pathetic, heroic, and majestic image—of Order’ [Taliessin through Logres [and] The Region of the Summer Stars, by Charles Williams; and Arthurian Torso, by Charles Williams and C.S. Lewis (Grand Rapids: Eerdmans, 1974), p. 289]), its translator, Brian Stone, remarks:

It is . . . a London poem of importance, in which the great city and its centre of worship [St Paul’s] become elements in the vision of a perfect Christian society. The rebuilding of the cathedral goes forward, the holy bishop brings grace and salvation to a scene threatened by supernatural disorder, and a whole town population fulfils its potential of blessedness. (p.13)

Furthermore, Stone observes, ‘The major doctrinal preoccupation of the poet is with the nature and power of prayer’ (p. 24). St Erkenwald’s approach to answering the concerns of his city, in ll.113-21, is after all to pray about it (p. 33):

When he came to the cathedral called after St Paul
On his mare, many met him with the marvel on their lips,
But he passed into his palace, impressing peace upon them,
Shunned the shouting throng, and shut the door behind him.

The dark night dragged through till the daybell rang,
But Sir Erkenwald was up in the early dawn before:
Nearly all night he had knelt in prayer,
Beseeching his sovereign of his sweet grace
To vouchsafe him a vision, or reveal the truth otherwise.

Obviously, another theme of the poem, which unfortunately I can only mention in this post, is the question of the salvation of heathens. The issue received a very interesting treatment in the article on the Lord’s descent into Hades by Bishop Hilarion (Alfeyev), which I have already discussed here. Needless to say, despite the special miracle granted in the end, ‘St Erkenwald’ takes what Bishop Hilarion describes as the Western view of the matter (ll. 288-91, p. 40):

‘I was missing among the many whom your misery redeemed
With the blood of your body on the black cross.
When you harrowed the pit of hell and haled them out,
All lifting you praise from Limbo, you left me there.’

Finally, ‘St Erkenwald’ involves a theme that has come up at least one other time on this blog, the varying significance of ἀφθαρσία, or ‘incorruption’, in Christianity (see the comments on this post). Here are ll. 85-92 (p. 32), describing the scene that greeted the Londoners when they opened the ‘wonderfully fashioned tomb’:

Neither spot nor stain soiled his garments,
Which were not mouldy or marked or moth-eaten,
But so bright and brilliant in their beautiful colours!—
Yes, as if but yesterday in the Yard they’d been tailored.

And as fresh were the face and the flesh elsewhere naked—
The ears and the hands openly showing
With rich ruddiness of the rose, and two red lips—
As if in sound health he had suddenly slipped into sleep.

As most readers of Logismoi are, no doubt, aware, incorruption is often a sign of sanctity, St Cuthbert of Lindisfarne being one of the most famous examples of ‘incorruptibles’, and St John (Maximovich) the Wonderworker being perhaps the most recent. But in some cases, it is interpreted rather as a sign that one is cursed (see my citation of Summers in the comments linked to above). Brian Stone, observing the same duality of belief in the Middle Ages in the West, seems to believe these interpretations are at odds:

Bede in particular celebrates many holy men and women whose bodies resisted corruption in the tomb: he relates, for example, that the body of St Cuthbert was found uncorrupted after eleven years in the tomb, with his clothes ‘not only spotless, but wonderfully fresh and fair’. By emphasizing these miracles Bede demonstrates the supernatural power of God to mark out the especially elect after death, and aims to further the faith by publishing them as widely as possible. . . . Orthodox medieval Christian belief, by contrast, regarded the death and decay of the physical body as natural concomitants of the elevation of the soul to bliss. (p. 22-3).

But of course why can’t both be the case? Like all miraculous phenomena, incorruption is not given by God as an objectively unambiguous sign of one thing or another, without the need of any interpretive context. It must always be understood precisely by the Church, by means of the discernment granted her by the guidance of the Holy Spirit.

Clearly, there is much to be pondered in ‘St Erkenwald’, even if it does not entirely agree with Orthodox doctrine, and I dearly hope that more Orthodox Christians will read it and think about it.
Posted by Aaron Taylor at 3:42 PM