Genre & the Book of Job 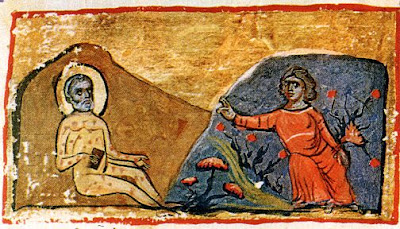 In his treatise, The Reason of Church Government Urged Against Prelaty, John Milton makes a passing reference to Job, calling it ‘a brief model’, as contrasted with Homer, Virgil, and Tasso, of the ‘epic form’ (Complete Poems & Major Prose, ed. Merritt Y. Hughes [NY: Odyssey, 1957], p. 668). It is not quite clear to me whether he believes Job to follow ‘the rules of Aristotle’ or ‘nature’ (ibid.), although Lewis seems to think ‘there was only one thing known to Milton which bore the name of epic and also differed in kind from the work of Homer and Virgil—the romantic or chivalrous epic of Boiardo, Ariosto, and Spenser’ (A Preface to Paradise Lost [NY: Oxford U, 1965], p. 5-6).

In a fascinating study of Job from a Bakhtinian perspective, Walter Reed has referred to the ‘ingenious’ and ‘suggestive solution to the problem of literary genre of Job . . . offered by Richard Moulton in his Literary Study of the Bible’, in which he argues that Job ‘is not contained by any’ one genre, whether history, philosophy, rhetoric, epic, drama, or lyric, ‘but incorporates them all within its aesthetic boundaries’ (Dialogues of the Word: The Bible as Literature According to Bakhtin [NY: Oxford U, 1993], p. 115). Reed acknowledges, ‘The idea that Job is polygeneric or many-voiced is plausible enough’ (p. 116), and Moulton’s is a tempting suggestion for a Bakhtinian reader, making Job ‘a special case of heteroglossia, an encyclopedic or Menippean aggregation of genres that are themselves more single-voiced or limited in scope’ (p. 115-6). But ultimately Reed argues that the Bakhtinian reader cannot help but notice its ‘anachronistic nature’—‘It too clearly reads back into an ancient Hebrew text of uncertain date and provenance an arbitrarily limited set of classical genres and disciplines first recognized as such in Greece in the fifth century B.C.E.’ (p. 116). For Reed, the various parts of Job ‘and the way in which they are orchestrated in the book as a whole can be better appreciated by situating Job in its biblical—and prebiblical—literary context’ (p. 116).

What this means for Milton, I think, should be clear. If it is anachronistic to call Job an ‘aggregation of genres’, then it is surely anachronistic simply to call it an epic, to be placed alongside Homer and Virgil. From this point, however, I’m not quite sure I can continue to follow Reed, or, it would seem, Bakhtin. Here are some of his conclusions on this issue of Job’s biblical literary context:

From the Bakhtinian perspective of the present study, it is not too much to claim that Job offers a critique of the Hebrew Bible as a whole. It calls into question the authority of this Bible’s generic paradigms of law, prophecy, and wisdom, at least wisdom in its more traditional, practical form. This critique is not a simple rejection, a parody, or an alternative scheme of revelation. Nor does it represent the biblical paradigms accurately, in all their flexibility and variety, especially the paradigm of wisdom, which after all managed to include Job itself within its canonical embrace. It is rather a literarily fictive critique of a historically realistic literature, a literature in the process of becoming scripture by fixing and restricting its play of possibilities in its presentation of the dialogue of God and his people. In Bakhtin’s terms, Job is a self-consciously dialogical reflection on a literature that was becoming, or that its author thought was in danger of being perceived as, monologic. (p. 120)

I must admit, I’m really not sure what I make of this. I will say one thing though, as uncomfortable as I find the idea of a biblical book ‘critiquing’ another biblical book, Reed’s reading leads to an interesting vindication of the epilogue. It strikes me that the latter receives short schrift in our day, a reaction to the older tendency to focus on the ‘story’ to the detriment of the poetry. But it goes a bit far it seems. By and large, we postmoderns have become so cynical and ironic that a ‘happy ending’ has become supremely distasteful. Even Bakhtin has expressed a similar opinion of Crime and Punishment, grumbling about its ‘conventionally monologic ending’ (Problems of Dostoevsky’s Poetics, ed. and trans. Caryl Emerson [Minneapolis: U of Minnesota, 1984], p. 39). We would do well to emulate Metropolitan Augoustinos’s simple joy when he tells us, ‘Finally God gave him an answer to his anxious question of why he is suffering. He honored Job for his patience and blessed his house. Thus Job returned to his former happiness, and to even greater, glorifying God’ (Metropolitan Augoustinos N. Kantiotes, A Panoramic View of Holy Scripture, Vol. 1: Orthodox Homilies Introducing All the Books of the Old Testament, trans. Fr Asterios Gerostergios [Belmont, MA: Institute for Byzantine & Modern Greek Studies, 2001], p. 152).

But if we find this difficult, perhaps we can at least follow Reed once more when he writes:

Indeed, what this final turn of the screw in the epilogue suggests is that God is an author and finisher of human plots who is so free that he can follow the traditional rules as well as break them. He is not finally bound by his people’s expectations concerning his behavior, even when these expectations are based on a careful reading of the record of his actions on their behalf. But neither is he bound not to satisfy these expectations. The discourse of justice, which for the author of the Book of Job represents the essence of Hebrew Scriptures as a whole, is ironically reinstated in a place of honor in the story of the righteous and pious man, but its authority is no longer absolute. God’s covenant with the chosen people at the center must be read against his providential relationship with other people—individuals rather than ethnic groups—at the margins of biblical awareness. (p. 135)

Comments or objections, anyone?
Posted by Aaron Taylor at 5:30 PM

I think Job addresses the part of wisdom which wisdom literature cannot address, since it is instructive in nature. No book on instruction says, "Though, all of this will be totally useless if some big disaster strikes." Some approximate it (such as Balthasar Gracian's Art of Worldly Wisdom which says, "in times of prospertiy, prepare for adversity") but none really cover it.

When I first read Job I was baffled, since it seems so utterly out of place against the general paradigm of 'do well and God will reward you, do evil and you will eat the fruit of your deeds.'

It addresses, then, the final 'piece', maybe, the dark night of the soul. Nobody learns wisdom except through trial, and most wisdom literature (or self-help literature, which is a derivative) never really addresses suffering that is on-the-face without meaning.

But, it seems like we can't be without 'meaningful suffering', as Job is not the model of suffering itself, since we often are the cause of our suffering (whereas Job is not.) Job is provided with a happy ending because - I think the conviction is - there would be one anyway, and it is more comprehensible and actually less, uh, 'trite', to give it to him before he dies. For him to have died and been with - whatever, 72 virgins or something (whatever the classic vision of 'paradise' might have been from time to time) would send the wrong message; the idea I think is that the reward is REAL, and many people even then I suppose interpreted 'Heaven' or 'Paradise' as 'Pie in the sky' or wishful thinking. Job's power is in its concreteness.

I don't know how appropriate it is to 'genre-ize' Job, since Job is in a sense 'the source' of a number of literary genres. Our horizontalizing tendency might be at work here; the desire to 'classify' everything on equal footing. Job is far too old and far to well read to be any genre at all.

My girl and I were going through the Screwtape Letters and there is some excellent commentary there (Lewis always has theology even if it is delivered 'from the mouths of babes' or in this case - 'lil devils) about this subject.

'Eucatastrophe'? If you want to stretch for a genre, that might be it.

Sorry I never did respond to your insightful comments here, River. I think I must have not had the time when I first read them, and then forgot about it afterward!

Of course I think you're quite right that Job need not be 'genre-ized', and that was intended to be the point of calling such classifications anachronistic. But one of my main interests in literature is the question of what one might call 'the ethics of genre', i.e., what moral strengths and weaknesses the various genres exhibit, and since there is something naturally paradigmatic about the Scriptures as literature, it is almost reflexive to immediately begin thinking about Job in generic terms, even if our conclusion must be ambiguous.

If it is 'eucatastrophe', does the eucatastrophe occur when the Lord finally speaks to Job, or when he receives his reward? I think most modern critics would say that the latter lacked the sense of unexpectedness that seems to be a part of eucatastrophe in Tolkien's description. It could indeed be seen as unexpected, however, if we follow Reed's conclusion about the epilogue that I have quoted here. I certainly like the idea that the Lord's response to Job is a sort of eucatastrophe though.