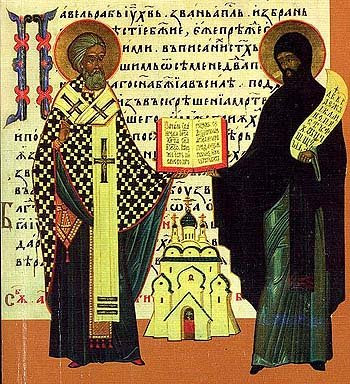 This morning, 11 May on the Church’s calendar, we celebrated the memory of Ss Cyril and Methodius, Equals-to-the-Apostles and Enlighteners of the Slavs. One can find accounts of their lives in the Prologue, as well as Bulgakov’s Handbook (although there seems to be no evidence for Bulgakov’s bald assertion that the Saints’ father was a ‘Bulgarian Slav Voivode’), and another account here, at the website of Bishop Alexander (Mileant) of blessed memory, though the English translation of this last is a little shoddy. Furthermore, I have posted previously on St Cyril here, and on one of the brothers’ disciples, St Naum, here.

Those of us in the various Slavic Churches owe a tremendous debt to Ss Cyril and Methodius. In his wonderful biography of these Saints, the Emeritus Professor of Slavic Ecclesiastical History and Literature at Aristotle University of Thessaloniki, Anthony-Emil Tachiaos, has written (Cyril and Methodius of Thessalonica: The Acculturation of the Slavs [Crestwood, NY: St Vladimir’s Seminary, 2001], p. x):

In the realization of this process [the bringing of the Slavs ‘into the Greek Empire’s cultural and spiritual sphere’], which was to have decisive consequences and amifications throughout European history, two brothers were summoned to play the leading role. Hailing from the celebrated city of Thessalonica [Thessaloniki], their names were Constantine-Cyril and Methodius. The acculturation of the Slavs, which was probably the most important event of the ninth century, was inseparably bound up with the creation of the Slavonic script and transmission to the Slavs of the cultural values of Greek education and spiritual life. This achievement was exclusively due to the two Thessalonian brothers, who have therefore acquired a well-deserved place in the consciousness of the Slav peoples as their apostles and teachers.

Tachiaos notes that even the Western churches have begun to acknowledge the tremendous achievements of the Saints, their contributions to universal Christianity as well as to European culture. He points out that John Paul II declared them 'co-patrons' of Europe, a 'friendly and welcome gesture' about which Tachiaos nevertheless notes, '[I]n the Orthodox Church the ecclesiastical authority does not confer titles and attributes upon the saints: it simply ratifies and codifies what the people already feel' (p. 143).
To give a little taste of the Saints themselves, I shall post a verse Prologue to the Slavonic translation of the Gospels that is attributed to St Cyril, known during his lifetime as 'Constantine the Philosopher' (as for St Methodius, see two stanzas of his canon to St Demetrius here). From good old Thomas Bulter, ed. and trans., Monumenta Serbocroatica: A Bilingual Anthology of Serbian and Croatian Texts from the 12th to the 19th Century (Ann Arbor, MI: Michigan Slavic, 1980), pp. 7-15:

A Homily by our Blessed Teacher
Constantine the Philosopher

This is a Prologue to the Holy Gospels.
Just as the Prophets had foretold before,
Christ is coming to gather the nations,
For He is a Light to the whole world.
Now they said: the blind will see,
And the deaf will hear the written word;
They will know God as they should.
Therefore, listen all Slavs:
For this gift is given by God,
A divine gift for the right side,
A divine gift for souls, never decaying,
For those souls that accept it.
And this is the gift: Matthew, Mark, Luke, and John.
They teach all the people, saying:
Those of you who see the beauty of your souls
Love one another and rejoice.
And those of you who wish to cast off the darkness of sin
And to put aside the corruption of this world,
And who wish to attain life in paradise
And to escape the burning fire,
Pay attention now with all your minds!
Hear, all you Slavic people,
Hear the Word, for it comes from God,
The Word which nourishes men’s souls,
The Word which strengthens hearts and minds,
The Word which prepares all to know God.
For just as there can be no joy without light
For the eye seeing all God’s creation,
But instead everything is neither beautiful nor visible,
So, likewise, every soul without letters
Does not see God’s law well,
The sacred law of the Scriptures,
The law revealing Paradise.
For how can hearing that has not heard the thunder’s roll
Be afraid of God?
And nostrils that haven’t smelled a flower—
How can they sense God’s wonder?
And a mouth that has no taste for sweetness
Makes a man like a stone.
Even more does the unlettered soul
Appear dead in men.
And we, brethren, reflecting on all this,
Give you the proper advice,
Which will free all men from the life of cattle and from lustful desire;
Lest having an unenlightened mind,
And listening to the Word in foreign tongue,
You hear it like the voice of a copper bell.
For Saint Paul, in teaching, said this:
‘In offering my prayer up to God
I would rather speak five words
That all my brethren understand,
Than a multitude of incomprehensible words.’
Now what man doesn’t understand this?
Who will not make use of wise parables
Telling us right counsel?
For just as corruption awaits the flesh,
Everything decaying and putrefying worse than pus,
When it doesn’t have its nourishment,
So, too, does every soul perish
When it doesn’t have divine life,
When it doesn’t hear the Word of God.
But let us relate another parable, a very wise one,
O men loving one another
And wishing to grow in God!
For who does not know this true faith?
Like the seed falling on the fertile ground
It falls in the same way on the hearts of men
Which need the rain of God’s letters
So that the divine fruit may grow.
Who can tell all the stories
Which expose nations without books,
Speaking in an unintelligible voice?
Even if one knows all languages
One cannot express their powerlessness.
But let me add my own parable,
Imparting much wisdom in a few words:
Naked are all nations without Scriptures,
Weaponless, unable to fight
With the adversary of our souls,
Ready for the prison of eternal torment.
But you nations that don’t love the enemy,
And truly intend to fight against him,
Open diligently the doors to your minds,
Having received now the sturdy weapons
Forged by the Scriptures of the Lord,
Which irritate the devil’s head very much.
For whoever accepts these Scriptures—
To you Christ speaks His wisdom
And strengthens your souls,
Together with the Apostles and all the Prophets.
And whoever says their words
Will be capable of killing the enemy,
Bringing to God a fine victory,
And fleeing the stinking decay of the flesh,
Of the flesh whose life is like a dream.
Not falling, but standing firm,
They will appear before God as courageous men,
Standing at the right side of God’s throne,
When with fire He will judge nations,
Rejoicing with the angels through all ages,
Eternally praising the merciful God,
Always in Psalms from the Scriptures,
Singing to God Who is merciful toward man:
Because to Him is proper every kind of glory,
Honor and divine praise always,
Together with the Father and the Holy Spirit,
Through all ages, and from all creation.
Amen.

A beautiful verse homily; thank you for sharing.