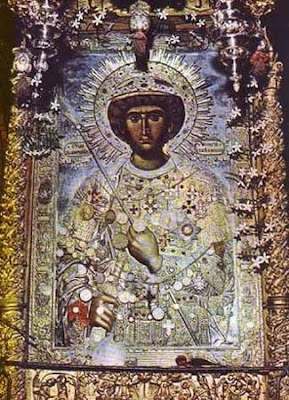 At the wonderful website of Bishop Alexander of Buenos Aires (ROCOR) of blessed memory, I found a great story about a miraculous icon of St George AND a monk named Fr Aaron (who, I’ve just learned, was one of the founders of Zographou on the Holy Mountain, which leads me to wonder whether he is venerated as a Saint there). Incidentally, the monastery of Xenophontos is also dedicated to St George, as well as, if memory serves me, at least one kelli.

In the year 919, three brothers—Moses, Aaron, and Vasilios [I’ve also see then third named as ‘Ivan Selima’]—went to Mount Athos to become monks. They built three tents in a large valley near the river. They also built a small church near there, but were skeptical about what saint to name the church after. They prepared the board on which the icon of the patron saint of the church was to be painted, however, they did not paint the icon because they could not decide to which saint the church should be dedicated. When the monks went to the church the next morning, « they found that an icon of Saint George had been painted on the board. The icon was painted in an ancient style. This miracle showed the brothers that God wanted their church dedicated to Saint George.

The following is considered to be the history of this icon before its appearance in the Monastery of Zographos. This icon was originally in the Monastery of Phanouel, located in Lidan. From the time that Eustratios was the abbot of this monastery, the icon had performed many miracles. One day in the presence of the monks, the icon came off of the piece of wood on which it had been painted and disappeared from their sight. The monks were extremely saddened by this event and felt that God had forsaken them. Then, the Abbot Eustratios saw Saint George before him and the Saint told him not to weep for him for he was on Mount Athos. The abbot told the other brothers of his vision. Eustratios left the monastery, and after going to Jerusalem, he embarked on his journey to Mount Athos. After searching in many of the monasteries for the icon, he finally came upon the Monastery of Zographos. When he entered the church, he saw the icon hanging without anything supporting it. Eustratios remained at that monastery until his other brothers came to see the miracle.

That icon performed the following miracle. The Bishop Vothenon visited the monastery and began to question the events without faith. Pointing to the icon, he laughed and said, ‘Is this the miraculous icon?’ He placed his finger on the icon and there it stuck. To this day, visitors to the monastery can still see the finger hanging on the icon.
Posted by Aaron Taylor at 7:00 PM