'You Gave the Law to the Lawless'—St Stephen of Perm 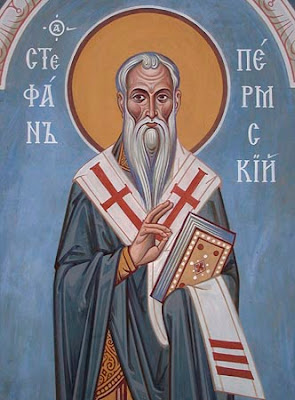 Today, 26 April, we celebrate the memory of St Stephen of Perm (also known as Степан Храп). A holy hierarch of the fourteenth century and friend of St Sergius of Radonezh, for whom he had ‘a great spiritual affection’ (The Northern Thebaid, comp. and trans. Frs Seraphim [Rose] and Herman [Podmoshensky] [Platina, CA: St Herman of Alaska Brotherhood, 1995], p. 33), St Stephen of Perm is most famous as a missionary who converted the (Finno-Ugric) Komi people of Perm, in the Northeastern part of European Russia. Here is the account of his life in the Prologue:

Stephen was a Russian by birth [although it should be added that, he is believed to have been born in Velikii Ustiug of a Komi mother—see the brief Life here]. From an early age he was devoted to prayer and pious thoughts. As a young man, Stephen went to Rostov where he was tonsured a monk in the monastery of St Gregory the Theologian. Learning about the Land of Perm, completely overrun with the weeds of heathenism, Stephen desired to become a missionary in this land. He immediately dedicated himself to the studying of the language of the Perms and when he mastered the language, he composed an alphabet and translated the ecclesiastical books into that language. With the blessing of the Metropolitan of Moscow, Stephen, as a presbyter, started out on his apostolic mission and with apostolic zeal began to preach the Gospel in this dense darkness of the heathenism of Perm. Having baptized a few souls, he endeavored to build a church in Perm dedicated to the Holy Annunciation. When the Church of God flourished in Perm, he was consecrated as its bishop. Undergoing every hardship, affliction, maliciousness and humiliation, he succeeded to dispel the darkness among the heathens of Perm and to illuminate them with the Light of Christ. In his old age he returned to Moscow once more but, there ended his earthly life and took up habitation with the Lord in the year 1396 AD.

Epiphanius the Wise has written a panegyric to St Stephen in the famous ‘word-weaving’ style that he perfected (‘word-weaving’ was already discussed in this post on St Euthymius of Tŭrnovo). Here is part of Nicholas Zernov’s translation as given in Serge A. Zenkovsky, ed., Medieval Russia’s Epics, Chronicles, and Tales, rev. ed. (NY: Meridian, 1974), pp. 260-2:

My father, lord, and bishop, although you have passed away, I should like to sing your praises with my heart, with my tongue, and with my mind. When you were alive, I often was your annoyance, but now I am your panegyrist; and sometimes I would argue with you about happenings and works, about some verses or some lines, but now, remembering your enduring patience, your great reasoning, and your blessed humility, I humble myself; I cry, shedding tears.

Shall I call you a prophet,
since you prophesied prophetic prophecies,
and, like a prophet, explained the hopes of the prophets,
and among the people, faithless and unlearned,
you were a prophet?

Shall I call you an Apostle,
since you performed apostolic deeds
and, acting like an Apostle, following the examples of Apostles,
acted, following in the steps of the Apostles?

Shall I call you the Baptist,
since you baptized many
who came to you to be baptized?

Shall I call you a preacher, since,
like a herald who announces in the town square,
you loudly preached the word of God to the heathens?

Shall I call you an evangelist,
since you proclaimed Grace to them
and the Holy Evangel of Christ,
and performed many deeds of the annunciator of Grace?

Shall I call you a teacher,
since you taught the heathens who had gone astray, since
you brought the faith to the heathens
and taught men who were unlearned?

Shall I call you a sufferer or a martyr,
since, like a martyr, you surrendered yourself
into the hands of men who were cruel in torturing,
since you were as a sheep among wolves,
since you accepted martyrdom, suffering, and torment?

Many epithets have you received, O Bishop!
Many titles have you won!
Many gifts have you deserved!
Many blessings have enriched you! 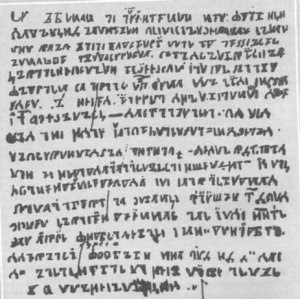 As St Stephen is ‘the creator of Permian letters’, his feastday is also known as ‘Old Permic Alphabet Day’ among the Komi (see the Wikipedia article here). The alphabet, which apart from Hungarian made Komi the oldest written Finno-Ugric language, was a combination of some Greek/Cyrillic letters with the rune-like native Komi tamga signs. Old Permic was used for three hundred years, until finally some adaptations were made to the Cyrillic alphabet so that it could be used. There is a sample of the old writing to the left, and one can see a brief description and a key to the alphabet here.

There is a ROCOR parish in Australia dedicated to St Stephen of Perm (see here), and he is also the Patron Saint of my own father. Many years to the parishioners of St Stephen Church, and many years, dad, on your nameday!
Posted by Aaron Taylor at 12:39 PM

Thanks, Aaron, for the remembrance. What a blessing to remember this day the dedicated labors of this gifted communicator who, by his deeds and with the grace of God, saved many! St Stephen of Perm, pray to God for us all!!