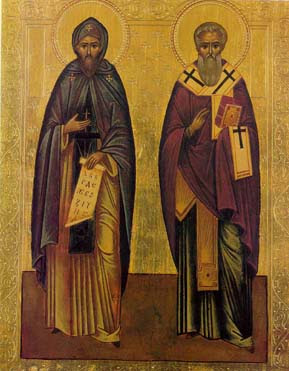 There is an article which I have planned to track down for some time now: Ihor Ševčenko’s contribution to a festschrift for Roman Jakobson, ‘The Definition of Philosophy in the Life of Saint Constantine [Cyril]’, For Roman Jakobson: Essays on the Occasion of His Sixtieth Birthday, 11 October, 1956, comp. Morris Halle, Horace G. Lunt, Hugh McLean, and Cornelis H. Van Schooneveld (The Hague, 1956), pp. 449-57. Anthony-Emil Tachiaos has cited it in a footnote to a passage in his biography of Ss Cyril and Methodius where he discusses St Cyril’s ‘viva voce examination’ upon completing philosophical studies in Constantinople (Cyril and Methodius of Thessalonica: The Acculturation of the Slavs [Crestwood, NY: St Vladimir’s Seminary, 2001], pp. 27-8):

Cyril’s completion of university-level studies opened up the way to a brilliant career either in the state or Church administration or in the educational field. One day Logothete Theoctistus asked him, ‘“Philosopher, I should like to know what philosophy is.” And without hesitation Cyril replied, “Knowledge of things human and divine, insofar as Man is able to approach God, for it teaches Man by his actions to become the image and likeness of his Creator.” This eminent and venerable man loved Cyril all the more for his reply, and plied him with questions. The latter, giving him this philosophy lesson, revealed a great mind in a few words’ (Vita Constantini 4). It is beyond doubt that in holding this philosophical discussion with Cyril the great Logothete was setting the young Thessalonian a kind of viva voce examination. Having concluded his studies, specializing in philosophy, Cyril immediately acquired the title of ‘Philosopher’, by which Theoctistus always addressed him thereafter (J. Schütz, ‘Konstantins Philosophie und seine Bestellungsurkunde als Philosoph’, Wiener slavistiches Jahrbuch, vol. 31 [1985], pp. 89-98). The examination was on the subject-matter of his philosophical studies and was in that sense a sort of state examination. The first part of Cyril’s reply encompassed the notion of philosophy as taught by the Stoics and Plato, while the second part supplemented it with a Christian conception of the term ‘wisdom’. At all events, Cyril’s words corresponded precisely with what was taught by the philosophy manuals in use in ninth-century Byzantium (Ševčenko, pp. 449-557).

I’m quite curious to see what Ševčenko has to say about this. Although I don’t know much about 9th-c. Byzantine philosophy manuals, St Cyril’s reply sounds to me exactly like some of the statements concerning philosophy made by St John of Damascus in his Fount of Knowledge (Writings, trans. Frederic H. Chase, Jr. [Washington, DC: Catholic U of America, 1999], p. 11):

Can you recommend some books on St Cyril (which I made be able to actually find)?

Cyril> The one that I've quoted here by Anthony-Emil Tachiaos and published by St Vladimir's Seminary is the most affordable and accessible one that I know of in English. Anything else would be primarily for a scholarly audience and likely quite expensive! You can order the Tachiaos book from Amazon or from the SVS press website.

Maybe you should post a review of the book on Amazon, as the only review is fairly negative.

Thank you for pointing this out. While the reviewer's criticism of some of the scholarly details of the book was quite welcome, I thought his overall judgement rather unfair. I think he's misunderstood Tachiaos's remarks on 'civilization', and misinterpreted his 'Byzantinism'. Besides, even if one accepts the reviewer's assessment of these matters, I hardly think that makes Tachiaos's a less valuable study, as a whole, of the great missionaries than a mere portion of a chapter in Obolensky's book! Ironically, it is the review that strikes me as too subjective. His criticisms ought to stand, at best, as a caveat to the reader.