'The Mouth of the Righteous Drops Wisdom'—St Ignatius (Brianchaninov) 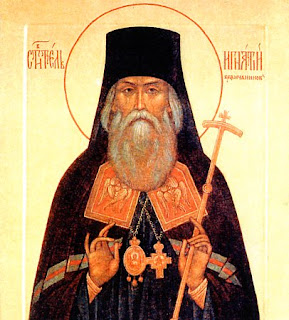 Today, 30 April on the Church’s calendar, we celebrate St Ignatius (Brianchaninov) (1807-67), Bishop of the Caucasus and the Black Sea. Then Archimandrite Kallistos (Ware) calls him ‘one of the most able and attractive personalities in the Russian Church of his time’ (Introduction, The Arena: An Offering to Contemporary Monasticism, trans. Archim. Lazarus [Moore] [Jordanville, NY: Holy Trinity, 1991], p. v). Elsewhere, Bishop Kallistos writes (Foreword, On the Prayer of Jesus, trans. Archim. Lazarus [Moore] [Boston: New Seeds, 2006], p. xvi):

St Ignatius Brianchaninov was a prolific author, and the standard edition of his collected works, published at St Petersburg in 1885-1886, runs to five substantial volumes. Most of his writings are concerned with the monastic life, but he also wrote on the state of the soul after death, upholding the traditional Orthodox teaching on the twenty ‘toll-houses’.

Along with St Theophan the Recluse, Fr Seraphim (Rose) placed a great deal of emphasis on St Ignatius as a teacher especially accessible in our day. In his article, ‘Raising the Mind, Warming the Heart’, available here, Fr Seraphim writes (see 5 & 7):

5. . . . They were recent Orthodox Fathers in Russia who were thoroughly steeped in the spirit of the Holy Fathers. They spoke to people in the language of their times, a period very close to our 20th century. All the temptations of our times were known to them, especially to Bishop Ignatius, who read all the Western writers, was himself an engineer and knew all the latest theories of mathematics and calculus. Knowing the present situation and the whole of modern Western wisdom, they set forth the Orthodox teaching for these times and answered all kinds of arguments. Bishop Ignatius, for example, wrote a volume on hell and the state of the soul after death, elucidating Orthodox teaching in a way that can be understood by Western man. These Fathers, as well as others who have read them and followed them, hand down Orthodoxy to us in a very accessible way.

7. . . . We have to look at ourselves: if we see that we have zeal for Orthodoxy and yet are not "linked" with the line that goes back to Ignatius Brianchaninov and Theophan the Recluse, there is a danger that we might not be linked to all the Fathers. There should be a continuous line.

Apart from the books from which I’ve already quoted the introductory materials, and a few passages online (see a passage on the Jesus Prayer here, some excerpts posted at Incendiary here, and some hard sayings of the nullus salvus sort here), there has been a series of translations from St Ignatius’s writings published in Divine Ascent. Here is part of one of them (‘On Attention and Distraction’, Divine Ascent: A Journal of Orthodox Faith, No. 7, Presentation of the Theotokos, November 2001, pp. 123-4):

The sons of the world consider distraction to be something innocent, but the holy fathers recognize it to be the origin of all evils. The person who is given up to distraction has, concerning all subjects and even the most important ones, a very light and most superficial understanding. One who is distracted is usually inconstant. The feelings of his heart usually lack depth and strength; they are not solid but transitory. As a butterfly flits from flower to flower so also a distracted person passes from one earthly satisfaction to another, from one vain care to another.

Distraction itself punishes the one who is devoted to it. With time everything bores him, and as one who has not acquired any sound understandings and fundamental impressions whatsoever, he is given up to a tormenting endless despondency. As much as distraction iss harmful in general, it is especially harmful in the work of God and the work of salvation, which requires constant and intense vigilance and attention. ‘What and pray lest you enter into misfortune,’ says the Savior to his disciples (Matthew 26:41). ‘I say to all: watch,’ (Mark 13:37), the Savior said to all Christianity, and therefore, he said it to us in this time.

He who is leading a distracted life is directly contradicting the commandments of the Lord Jesus Christ with his life. All of the saints dilligently fled from distraction. They were concerned in themselves constantly or at least as often as possible. They paid attention to the movements of their mind and heart and they directed them according to the testament of the gospel. The habit of attending to oneself keeps one from distraction, even amongst distractions which are noisy and surrounding one on all sides. The attentive person abides in solitude, even amidst a multitude of people. A certain great father who had learned by experience the benefit of attention and the harm of distraction said that without intense watchfulness over oneself it is impossible to succeed in even one virtue.

There is a brief account of St Ignatius’s life and some excerpts from his writings in an article from Orthodox America here, and one can read a lovely appreciation of his writings by Fr Thomas Hopko here. Finally, there is a service in honour of the holy hierarch that has been translated into English here. The title of this post is taken from the verses that accompany the Old Testament readings in the service of Great Vespers for the Saint's feast.
Posted by Aaron Taylor at 1:07 AM