'The Star of Russia'—St Theodosius of the Kiev Caves 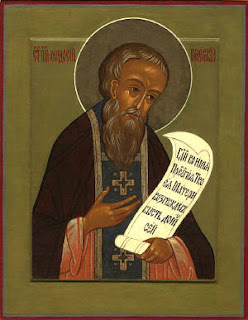 Today, 3 May on the Church’s calendar, we celebrate the memory of St Theodosius (†1074), Abbot of the Kiev Caves Monastery and founder of Russian cœnobitism. I have long had a particular affection for St Theodosius, ever since first encountering him in Metropolitan Kallistos’s standard, if flawed, introduction to the faith. His Eminence writes:

Like Vladimir, Theodosius was conscious of the social consequences of Christianity, and applied them in a radical fashion, identifying himself closely with the poor . . . . Boris and Gleb followed Christ in his sacrificial death; Theodosius followed Christ in his life of poverty and voluntary ‘self-emptying’. Of noble birth, he chose in childhood to wear coarse and patched garments and to work in the fields with the slaves. ‘Our Lord Jesus Christ,’ he said, ‘became poor and humbled Himself, offering Himself as an example, so that we should humble ourselves in His name. He suffered insults, was spat upon, and beaten, for our salvation; how just it is, then, that we should suffer in order to gain Christ.’ Even when Abbot he wore the meanest kind of clothing and rejected all outward signs of authority. Yet at the same time he was the honoured friend and adviser of nobles and princes. [1]

The ‘Life of Theodosius’ tells us, ‘For he was humble in manner, gentle in thought, guileless in mind, full of spiritual wisdom, and possessing a pure love for all the brethren.’ [2] By this ascetic imitation of our Lord’s humility and by constant prayer, St Theodosius rose to great heights. As it is written in the Kiev Caves Patericon:

Who will proclaim the mercy of God? For He did not choose a shepherd and teacher for his monks from among wise philosophers or from rulers of cities but—for this may the Lord’s name be glorified—a man who, although simple and unlettered, showed himself to be wiser than the philosophers. O hidden mystery! For the bright morning star shown forth for us from a place where it was not expected, so that we beheld its radiance from all lands and ran towards it, scorning all else, and satisfied by that light alone. [3]

Similarly, here are a few passages from the encomium in his honour found in the Patericon:

It is on this day that our teacher, guide, and pastor departed to eternal life—our father Feodosij, great mong the fathers, a bright light, a steadfast warrior and miracle-worker in the land of Rus’. Where, indeed, is there greater joy than this, that we have been vouchsafed to behold the departure to the Lord of our father and teacher, who received a crown of incorruption and serves forever by the throne of the Lord, emboldened to pray to Him for us? [4]

During his earliest years he spurned earthly things and occupied his mind with those of heaven, even as a young boy. From his mother’s womb he was an unsullied vessel of the Holy Spirit. He did not love the glory of this world, but of his own free will accepted poverty and imitated his Lord in all things. He gave no thought to the good things that pass away and desired only the time when age would come and he would appear before the face of God and converse in prayer with Him alone. . . . But the grace of God beheld him there where it shines forth like the sun in the vaults of heaven, illuminating the whole world with its rays. He accepted what was done to him and was not deprived of the power of vision, but as the days passed he ascended to better things, forgetting those things which are behind and reaching forth into those things which are before, according to the words of the Apostle (Phil. 3:13). [5]

Today, brethren, it is fitting that we should rejoice and be filled with spiritual gladness, that we should put on fine apparel and make a joyful celebration, since we have always before our eyes our venerable father Feodosij’s coffin, in which on this day his holy and much-suffering body was laid and which sends forth rays of miracles to all corners of the land of Rus’. This coffin has received a treasure which cannot be stolen, a vessel of the Holy Spirit, a divine instrument—the noble body of our father and teacher. As we look at this, it is as though we gaze upon his very self. For although the holy one has been laid in his tomb, yet in spirit he is always with us and can see [us]. [6]

Rejoice, light of the Rus’ land, for like the morning star which appears in the west and shines forth in the east you illuminate the whole of our land! Rejoice, you who have prescribed and given to us an example of the true way, our guide, director, and teacher of the monastic life! [7]

Rejoice, O father Feodosij, our glory and splendor! Your lavra glories in you, and its name is renowned to the ends of the earth. [8]

I’ll mention two further points. In her intriguing book, Saints and Postmodernism: Revisioning Moral Philosophy, which I have mentioned before (here and here), Edith Wyschogrod has used an episode from St Theodosius’s childhood to show how hagiography defies Lyotard’s statement that ‘Narrative is the quintessential form of customary knowledge . . .’. [9] Wyschogrod writes:

Consider the account of the life of St Theodosius, the first monastic saint canonized by the Russian church and recounted by Nestor, a monk of the same Kievan cloister to which his subject belonged. Theodosius was born to ‘Christians of exemplary piety’ [10] but decided to join a group of pilgrims against his mother’s wishes [11]. The point about his parent’s piety is important because it tells against the argument that Theodosius is merely following the Gospel precept to leave even one’s parents if they lack faith in Christ. The struggle is intense: ‘Carried away by fury, [Theodosius’s mother seized him by the hair, flung him to the ground . . . trampled on him, [and led him home] bound like a criminal. . . . [She] flung him into a room, shackled him and locked the door’ [12]. Hagiographic narrative is replete with such instances of rebellious conduct. The legitimation of customary morality cannot have been the sole intent of the story, and, conversely, if such narratives highlight deviation from custom, morality grounded in custom cannot be said to support them. [13]

Unfortunately, in a footnote Wyschogrod picks up on George Fedotov’s ridiculous notion that ‘the kenotic school of St Theodosius rejected radical asceticism’. [14] It seems to me that this idea does not stand up to such passages as the following:

Our father Feodosij surpassed everybody with his humble thought, obedience, labor, asceticism, and physical activity. For he was both virtuous and strong in body, and he would serve everybody selflessly. He would carry water and wood from the forest on his shoulders. He kept vigil every night and sang God’s praises in hymns. . . . sometimes, when there were many flies and gnats, he would come out on top of the cave at night, strip himself to the waist, and sit, singing David’s Psalter and spinning wool for weaving footwear. His entire body would be covered by a multitude of flies and gnats, which would eat at his flesh and drink his blood. [15]

Note that the detail about the flies and gnats is reminiscent of the extreme asceticism of St Symeon the Stylite. Notwithstanding the facts, however, Fedotov’s artificial separation of humility and asceticism was unfortunately carried on by such theologians as Serge Verhoskoy, [16] whose ideas on the matter Fr Michael Pomazansky has ironically, but as is apparent, not quite accurately, called ‘original’. [17] Let’s consign this idea to the dustbin, shall we?

In conclusion, here is the Kontakion in Tone 3 for St Theodosius:

Today we venerate the star of Russia, the blessed Theodosius, who hath shone forth from the east and come unto the west; for he hath enriched both this whole land with miracles and blessings, and us with the establishment and grace of the monastic rule. [18]

[2] St Nestor the Chronicler, ‘The Life of Our Venerable Father Feodosij, Superior of the Caves Monastery’, The Hagiography of Kievan Rus’, tr. Paul Hollingsworth (Cambridge, MA: Harvard U, 1992), p. 50.

[12] Wyschogrod quotes Iswolsky’s translation; in Hollingsworth’s translation the corresponding passage is on p. 38.

Ruth Coates has also taken Fedotov to task for this in a wonderful article on Bakhtin and hesychasm. See this post.