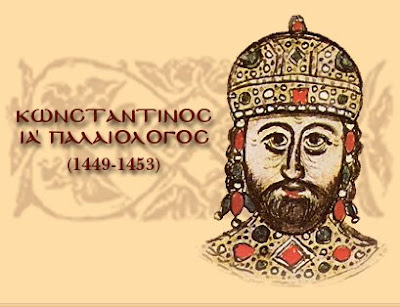 Today, 29 May on the Church’s calendar, many Orthodox Christians remember not only the Fall of Constantinople generally, but also the last Emperor, commonly known as Constantine XI Palæologus, celebrating him as an ‘Ethnomartyr’ for the Roman people. On this subject, Archbishop Chrysostomos of Etna has written a little monograph, Constantine the Ethnomartyr: Last Emperor of Byzantium (Etna, CA: Center for Traditionalist Orthodox Studies, 1998). Although I know of those who conclude that the historical or canonical argument that the Emperor ought to be so remembered is weak, I for one found it persuasive. His Eminence's main point is that the veneration of Saints is first and foremost a popular recognition by the people of God, that the pious memory of a particular figure by the laity is the primary basis for the recognition of Saints by the Church. Concerning the last Emperor, Archbishop Chrysostomos concluded that it is ‘difficult to argue that the conscience of the Church does not, indeed, regard him a Martyr’ (p. 21).

But on the subject of the false ‘union’ with Rome, His Eminence also argues that the Ethnomartyr was in the extremely difficult position of having to protect ‘the State and the Church’, whereas a figure like St Mark of Ephesus as a bishop had responsibility solely for ‘the protection of the purity of the Church’ (p. 27). He therefore concludes:

We must acknowledge that Constantine’s actions should be understood, not so much as a betrayal of the Orthodox Church, but as the result of political expediency. . . . In fact, Patriarch Gregory Mammas, a unionist, had left Constantinople for Rome in 1451, precisely because he found Constantine lukewarm in his support of the union. (p. 28)

In support of the idea that Constantine’s unionist forays were strictly a matter of political expediency and not one of theological commitment, it is very telling that during the last Great Week and Pascha ever celebrated in Byzantine Constantinople, the Emperor did not attend any of the services in Hagia Sophia, but went instead to the Palace Church of the Theotokos of Blachernæ. In thus absenting himself, Constantine was following the example of the overwhelming majority of his subjects, including most of the lower clergy and all the monastics, who had become vehemently hostile to the union with Rome, after a unionist Liturgy was celebrated in Hagia Sophia on December 12, 1452 (the Feast of St Spyridon), presided over by Cardinal Isidore, who commemorated the then Pope, Nicholas V, in the Diptychs. (p. 29) 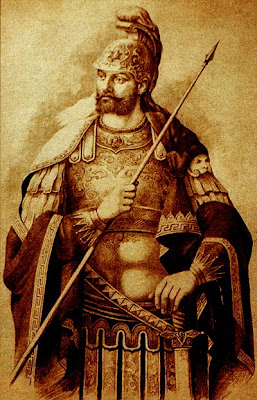 Regarding the Ethnomartyr’s return to Hagia Sophia and reception of Holy Communion on the eve of the City’s fall and his own death, Archbishop Chrysostomos interprets it as an expression of solidarity with the people in the face of impending death:

It was, like his life and like his reign, a tragic event which rises above the petty, accusatory depiction offered by those who lack the compassion and taste to understand the enigma which is history. It characterizes a man who was neither an apostate nor a perfect witness, but a sincere servant of his people.
(p. 33)

A brief note on the designation of the Emperor: he is usually styled Constantine XI Palæologus, but Archbishop Chrysostomos argues that technically he should be Constantine XII Palæologus (see pp. 13-6). He points out that another Constantine (Lascaris) was elected during the Fourth Crusade in 1204, but did not live long enough to be crowned by the Patriarch. His Eminence believes that this does not preclude his being recognised as Constantine XI, particularly since his successor, Theodore I Lascaris has his reign dated to 1205 but was not crowned until 1208 (p. 15). At any rate, all of this is to say that as I am absolutely ignorant of these matters, I have generally followed convention in referring to the last Emperor as Constantine XI so as to prevent confusion, but Archbishop Chrysostomos’s argument that he should really be Constantine XII seems perfectly legitimate to me.

Finally, I shall quote two relevant poetic works. First, the ‘Hymn of Praise’ by St Nicholas (Velimirović) for ‘The Fall of the City Constantinople and the Emperor Constantine XI’ from the Prologue (a beautiful poem, though the translation does not strike me as wholly felicitous):

Constantine the Emperor, Constantinople bravely defends,
And to God quietly prays, within himself:
O Most-high God Who, from the heavens is looking
And injustice, you do not allow to defeat justice
Christians, against You, greatly sinned
And Your laws, have trampled greatly
Without Your permission, this battle is not
Because of men's sins, this blood sheds.
That this city falls, is it Your will
That they do not surrender, encourage my people,
That the Cross do not trample and to Islam go
But to endure bondage, until a freedom new
Let them servants be, let them even be slaves
Upon them, let hatred and ridicule befall,
But, with hope and repentance, let them endure
And, with bitter sighing, for former sins,
Until their sins, they wash away and every sin, they repay,
And until to You, they completely return.
If they have You, they will be rich,
All plundered treasures, You will replace.
Constantinople on earth, be or not be—
Constantintople in heaven, You established,
Where, with Your servants, you gloriously reign.
Before this Constantinople, behold, even I stand.
O Blessed One, on our sinful soul, have mercy,
When it is built anew, let the old one be razed!

Second, from the outstanding journal Road to Emmaus, here are three stichera in the First plagal mode ‘in Memory of the Martyrs of the Fall of Constantinople:

Come, brothers, let us praise the phalanx of martyrs
Who bravely strove against many barbarians,
With Constantine first among them,
A most valiant army, a most sacred regiment,
An unbroken and invincible rank,
The proud boasts of the Faith and of our Race,
Martyrs of the Fall, company of the godly,
The Church’s powerful envoys supplicating
Christ to send down upon His people peace and great mercy.

Hail, strong gathering and holy,
Victorious company, towers of piety,
Steadfast soldiers of Christ, unconquered warriors,
Most vigorous in mind and most valiant in soul,
Truly holy and most dear to God,
Sacred choir, and divinely-inspired body,
Martyrs of the Fall, with Constantine
In the Queen of Cities, who will receive crowns of glory,
Implore Christ that great mercy be given to His people.

Hail, trophy-bearing throng,
Who valorously acquitted yourselves in wars,
Stars who have passed through many torments
And astonished the whole world,
You who have made earth heaven and illuminated all things,
In Abraham’s bosom now cherished
And dancing with ranks of angels,
Martyrs of the Fall, flowers breathing
An aroma of certain hope in the resurrection of our Race,
Implore Christ that great mercy be given to His people.