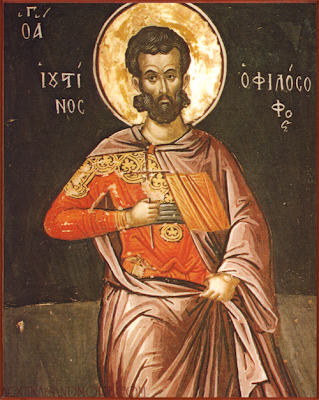 This morning, 1 June on the Church’s calendar, we celebrated the memory of the Martyr Justin the Philosopher (c. 100-165), or ‘St Justin Martyr’. Unfortunately, dear readers, it has been quite a busy weekend, and I’m afraid I haven’t had time to compose a proper post to honour St Justin. Instead, I shall simply post four relevant texts. First, here is the section on St Justin in Constantine Cavarnos’s wonderful overview of philosophy in the Church Fathers, Orthodoxy and Philosophy (Belmont, MA: Institute for Byzantine & Modern Greek Studies, 2003), pp. 20-2:

The greatest of the Apologists was Justin Martyr the Philosopher. He was born in Palestine about 114 and was martyred around 165. As a young man he acquainted himself with the teachings of the Stoics, the Aristotelians, the Pythagoreans, and the Platonists. He found best the teachings of Plato. But even these did not completely satisfy his deep yearning for the truth. Having learned about the teachings of Christianity, he studied them, was won by them, and became a Christian. His conversion probably took place at Ephesus, in Asia Minor.

After his conversion, Justin continued to cherish all that he had found good in the philosophy of Plato, such as the belief in the immortality of the soul, retribution after death, and moral responsibility (see e.g. B.L. Gildersleeve, The Apologies of Justin Martyr, NY, 1877, p. xi). He pointed out, however, that ‘although the doctrines of Plato are not unlike those of Christ, they are not in all respects the same’ (Apology II, 13).

Besides Plato, he particularly admired Socrates, who was Plato’s great teacher, and the Pre-Socratic philosopher Heracleitos. Thus, Justin says: ‘Those who lived according to reason (λόγος) are Christians, even though they were accounted atheists. Such among the Greeks were Socrates and Heracleitos, and those who resembled them’ (Apology I, 46). The term ‘reason’ as used here by Justin denotes the mental faculty or power in man that apprehends values, that distinguishes between truth and error, good and evil, that orders one’s inner and outer life with a view to acquiring and doing what is good, and avoiding or overcoming what is evil, orienting an individual towards God. With regard to Socrates, Justin adds that he exhorted men to seek God, endeavoured to draw them away from demons, and taught them the immortality of the soul, as is done by Christianity, too.

Justin undertook to defend the Christian Faith, which was beign maligned by its enemies, and thereby to defend the Christians, who, as a result of hostility to Christianity were being persecuted by command of the Roman Emperors. He wrote two Apologies addressed to the Emperors. In these he made use of the teachings of the ancient Greek philosophers—especially thosse of Pythagoras, Hercleitos, Socrates, and Plato. He found these teachings very helpful in his endeavor to overcome the hostility of the Emperors by calling attention to certain important similarities between the beliefs of Christians and those of these philosophers, whom they respected.

Justin’s Apologies strengthened the morale of Christians. He himself endured martyrdom for his Christian faith. His martyrdom took place in Rome between 163 and 167, when Junius Rusticus was Prefect of that city (F.L. Cross, The Early Christian Fathers, London 1960, p. 49).

Second, here are two of the passages from St Justin’s writings to which Cavarnos refers, along with their original context. The first is from the First Apology 46 (NPNF transation):

Chapter XLVI.—The Word in the world before Christ.

But lest some should, without reason, and for the perversion of what we teach, maintain that we say that Christ was born one hundred and fifty years ago under Cyrenius, and subsequently, in the time of Pontius Pilate, taught what we say He taught; and should cry out against us as though all men who were born before Him were irresponsible—let us anticipate and solve the difficulty. We have been taught that Christ is the first-born of God, and we have declared above that He is the Word of whom every race of men were partakers; and those who lived reasonably [μετὰ λόγου, ‘with reason’, or ‘the Word’] are Christians, even though they have been thought atheists; as, among the Greeks, Socrates and Heraclitus, and men like them; and among the barbarians, Abraham, and Ananias, and Azarias, and Misael, and Elias, and many others whose actions and names we now decline to recount, because we know it would be tedious. So that even they who lived before Christ, and lived without reason, were wicked and hostile to Christ, and slew those who lived reasonably. But who, through the power of the Word, according to the will of God the Father and Lord of all, He was born of a virgin as a man, and was named Jesus, and was crucified, and died, and rose again, and ascended into heaven, an intelligent man will be able to comprehend from what has been already so largely said. And we, since the proof of this subject is less needful now, will pass for the present to the proof of those things which are urgent.

Now here is the passage from the Second Apology 13 (NPNF):

Chapter XIII.—How the Word has been in all men.

For I myself, when I discovered the wicked disguise which the evil spirits had thrown around the divine doctrines of the Christians, to turn aside others from joining them, laughed both at those who framed these falsehoods, and at the disguise itself and at popular opinion and I confess that I both boast and with all my strength strive to be found a Christian; not because the teachings of Plato are different from those of Christ, but because they are not in all respects similar, as neither are those of the others, Stoics, and poets, and historians. For each man spoke well in proportion to the share he had of the spermatic word, seeing what was related to it. But they who contradict themselves on the more important points appear not to have possessed the heavenly wisdom, and the knowledge which cannot be spoken against. Whatever things were rightly said among all men, are the property of us Christians. For next to God, we worship and love the Word who is from the unbegotten and ineffable God, since also He became man for our sakes, that becoming a partaker of our sufferings, He might also bring us healing. For all the writers were able to see realities darkly through the sowing of the implanted word that was in them. For the seed and imitation impacted according to capacity is one thing, and quite another is the thing itself, of which there is the participation and imitation according to the grace which is from Him.

Finally, I conclude with the ‘Hymn of Praise’ for St Justin from the Prologue for today:

Whoever belongs to Christ, that one dies for Christ,
Saint Justin, defender of the truth,
Recognized the power of Christ and expressed it,
Fearlessly turned around the entire empire
Defending the righteous; the heathens admonishing,
To the entire world, with truth shining.
He was from the city of the unbaptized where once ten lepers,
To Christ the Savior, bitterly cried out
By His word, they were healed,
And now, Justin, the leprosy of falsehood
By the power of Christ's Faith, alleviated,
As a father, he protected Christians,
The foolishness of paganism he unmasked,
To the emperors, he speaks the truth—
He was a light until the candle burned down,
Until the evil ones, his body took,
His soul to Paradise, the angels raised
That in heaven, it shines like the sun
To whom his Apologia shines,
Glorifying the name of the immortal Justin
Teaching the world, what is the truth.

I wonder if you know that my Archbishop Demetrios wrote his doctoral thesis on this great saint, for Harvard University. "The Pre-Existence of Christ in the Writings of Justin Martyr" by Demetrios Trakatellis was published by Scholars Press in 1976 but has been long out-of-print. There are a couple of used copies of it on amazon.com, starting at the strange price of $222.95! That's over a buck a page!

I don't suppose His Eminence has any give-away copies left?