'How Beautiful Is Your Purchase'—Holy Greatmartyr Tsar Lazar of Serbia 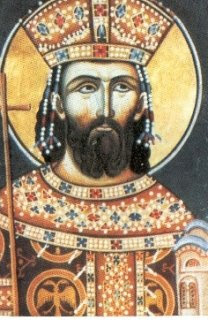 Tomorrow, 15 June on the Church’s calendar, is the feastday of the Holy and Great Martyr Tsar Lazar of Serbia (1329-1389), whom we at my parish are celebrating today so as not to interfere with the ROCOR celebration of All Saints of North America on Sunday. St Nicholas (Velimirović) calls St Lazar ‘one of the greatest men of Serbia who ruled the kingdom after King Dušan’ (The Prologue from Ochrid, Part II: April, May, June, trans. Mother Maria [Birmingham: Lazarica, 1986], p. 317). Patriarch Danilo III, whose Слово о Кнезу Лазару (1392/1393) is an important contemporary source on St Lazar and the Battle of Kosovo, writes (Fr Mateja Matejić and Dragan Milivojević, trans., An Anthology of Medieval Serbian Literature in English [Columbus: Slavica, 1978], p. 123):

He spent his life in pursuing different acts of virtue, modesty, and good deeds. He was very modest, mild, generous fair, like few other men. He was not like a rule, but like a father with his children, instructing and directing them. Archbishops, priests, and monks were paid homage; old men were respected according to the Epistles; noblemen were met; the young were instructed and were given love. He defended those who were victims of injustice. His eyes showed compassion, and his hand was outstretched and ready to give. Those who did not have any clothes were warmly clad; strangers were housed; the weak were comforted; and the faraway monasteries were provided with necessities. He was all things to all people, desiring in his heart from youth to acquire the Holy Spirit itself. Cities and churches were built and renovated, and others were erected and consecrated to the glory, praise, and honor of our Lord and salvation, Jesus Christ, thereby strengthening the might of his fatherland and his Christian nation.

But of course it is chiefly for his death that St Lazar is remembered. The Great Prince’s beheading at the hands of the Muslim Turks, and the Battle of Kosovo which preceded it, are the subject of the greatest poems of the Serbian language, known as the ‘Kosovo Cycle’ (see a translation by John Matthias and Vladeta Vuckovic with a moving Preface by Charles Simic here). Here is the central passage of the Serbs’ traditional account of their defeat, a spiritual interpretation of an historical event that has shaped their national psyche to this day:

Yes, and from Jerusalem, O from that holy place,
A great gray bird, a taloned falcon flew!
And in his beak he held a gentle swallow.
But wait! it's not a falcon, this gray bird,
It is a saint, Holy Saint Eliyah:
And he bears with him no gentle swallow
But a letter from the Blessed Mother.
He brings it to the Tsar at Kosovo
And places it upon his trembling knees.
And thus the letter itself speaks to the Tsar:
‘Lazar! Lazar! Tsar of noble family,
Which kingdom is it that you long for most?
Will you choose a heavenly crown today?
Or will you choose an earthly crown?
If you choose the earth then saddle horses,
Tighten girths—have your knights put on
Their swords and make a dawn attack against
The Turks: your enemy will be destroyed.
But if you choose the skies then build a church—
O, not of stone but out of silk and velvet—
Gather up your forces take the bread and wine,
For all shall perish, perish utterly,
And you, O Tsar, shall perish with them.’
And when the Tsar has heard those holy words
He meditates, thinks every kind of thought:
‘O, Dearest God, what shall I do, and how?
Shall I choose the earth? Shall I choose
The skies? And if I choose the kingdom,
If I choose an earthly kingdom now,
Earthly kingdoms are such passing things—
A heavenly kingdom, raging in the dark, endures eternally.’
And Lazarus chose heaven, not the earth,
And tailored there a church at Kosovo—
O not of stone but out of silk and velvet—
And he summoned there the Patriarch of Serbia,
Summoned there the lordly twelve high bishops:
And he gathered up his forces, had them
Take with him the saving bread and wine.
As soon as Lazarus has given out
His orders, then across the level plain
Of Kosovo pour all the Turks.

St Lazar’s son, Tsar Stefan Lazarević, had a memorial column inscribed at the site of the battle with a description of the events that took place there. Addressing any man ‘who enters the Serbian land’, the son calls his father ‘the soundest tower of devoutness who possessed the widest expanse of good sense and depth of wisdom’, and then of the battle:

What Christ wanted, he loved; and to that cause, by his own will, he sacrificed himself and all of his men under his command: brave heroes, courageous heroes, real heroes, in word and deed. They glittered like bright stars in the sky as the earth glimmers with motley flowers, dressed in gold and adorned with precious stones. There were many chosen heroes whose saddles were in gold, and they had the most magnificent and graceful riders. Like a good shepherd and leader of the most noble and glorious, he wisely led his lambs, endowed with reason, to die in Christ and to accept the crown of suffering and participate in heavenly glory. So together, the multitude of warriors with the good and great master, with courageous souls and with the soundest faith, rushed at the enemy as they would into a splendid hall with a many-flavored feast. They trampled underfoot the living snake and they killed the wild beast and the great enemy, the infernal and insatiable glutton Amurar [the Sultan Murad] and his son: the offspring of the elder and the reptile, the lion’s puppy and that of Vasilisk, and with them killed many others. Oh wonders, what a judgment of God! The courageous fighters were seized by criminal Agaren (Turkish) hands, and he accepted well the end of his suffering, thus becoming Christ’s martyr, the great prince Lazar. For he was cut down by none else, oh my loved ones, but by the very hand of that murderer, Amurat’s son [Bayezid I]. All this mentioned above happened in the year 1389, in the twelfth period of fifteen years, on the fifteenth day of the month of June, on Tuesday at six or seven o’clock, I do not know (exactly—God only knows). (Fr Matejić and Milivojević, pp. 132-3)

Concerning the death of Murad, while there is some uncertainty among historians about the details of his slaying in the Kosovo Cycle, John V.A. Fine, Jr. concludes, ‘We do not know whether there had actually been any accusations [of treachery] in the Serbian camp before the battle, but it is a fact that a Serb named Milo Obilić (or Kobilić) did desert and murder the sultan [with a knife hidden in his garments, according to the poems]’ (The Late Medieval Balkans: A Critical Survey from the Late Twelfth Century to the Ottoman Conquest [Ann Arbor: U of Michigan, 1994], p. 410). Fine also comments on the traditional understanding of Kosovo as a crushing defeat, that the ‘wild battle’ which followed Murad’s murder (concealed from the Turkish troops to preserve their morale) ‘resulted in the bulk of both armies being wiped out’ (italics mine—Fine, p. 410). It was a decisive defeat for the Serbs, however, because they ‘had brought to Kosovo close to the total of their fighting strength’, while the Turks, despite losing ‘a vast number of troops . . . , had many more troops in the east’, and ‘were able to continue their successful push into the Balkans’ after withdrawing for a time (Fine, p. 410).

St Lazar’s holy relics were ‘solemnly translated’ into the Ravanica Monastery, which he himself had founded, where they remained until 1690 (Fr Justin [Popović], ‘The Life of the Holy and Great Martyr Tsar Lazar of Serbia’, The Mystery and Meaning of the Battle of Kosovo: Selected Writings of Bishop Nikolai Velimirovich and Archimandrite Justin Popovich, trans. Fr Todor Mika and Fr Stevan Scott, Vol. 3 in A Treasury of Serbian Orthodox Spirituality [Grayslake, IL: Free Serbian Orthodox Diocese of the USA and Canada, 1989], p. 31). At that time, they were taken by the Serbs in a mass migration to Szentendre, Hungary, before being returned to Serbia, remaining at the New Ravanica Monastery in the Fruška Gora until WWII, when they were translated to the cathedral in Belgrade (Fr Justin, p. 32). Finally, on the 600th anniversary of the Battle of Kosovo in 1989, the precious relics were again translated to Ravanica, where they remain today.

In conclusion, I shall quote several stanzas of the ‘Canon to Prince Martyr Lazar’ by an anonymous monk of Ravanica, translated by Fr Matejić and Milivojević, pp. 112-19:

Even though we, your commemorators,
may not be able to praise you fittingly;
nevertheless, according to our ability,
we are weaving a new hymn
honoring your glorious memory,
telling of your life and martyrdom.
Being a loving father,
accept this praise,
disregarding its weakness. (p. 112)

Of the God-pleasing life of Job of Uz,
your virtuous life reminds us;
you excelled in knowledge and wisdom.
Adorned with modesty
and shining with the nobility of your life,
you later received,
O Lazarus,
even more precious gifts. (p. 114)

O holy one,
how beautiful is your purchase,
how wonderful your trade:
with transitory and insignificant glory
you have purchased the eternal one.
Enjoying it now,
pray for us.

Really, Lazarus,
who would not admire your life:
As a wise bee, you have collected
a multitude of flower-like virtues;
and, adorned with them,
you bestow a pleasant aroma upon us. (p. 115)

Rather early,
even before your martyrdom,
you, the wise one,
were endowed with wisdom
and a virtuous life.
After your wonderful sacrifice,
you became even more beautiful.
We, therefore, honor you
as one of God’s favorites,
and we proclaim:
‘Blessed is the God of our fathers!’ (p. 116)

Immersed in and adorned with a radiance
similar to the light of the sun,
O Lazarus,
vested in the royal purple
which was colored
by the redness of your blood,
holding the cross in your hands,
you stand in front of Christ,
Who has glorified you.
We, therefore, supplicate you:
entreat Him that we may receive eternal life
on account of your martyrdom. (p. 117)