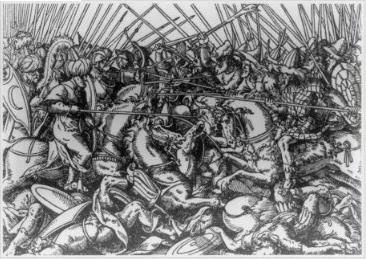 As an addendum to the posts about St Lazar and the Battle of Kosovo, I return to one of my favourite novels. There is an interesting, passing reference to Kosovo in Dracula, where Stoker (or perhaps the Count?) and Leonard Wolf in his note on the passage seem to me to misinterpret the significance of Kosovo among the Orthodox peoples of the Balkans. In the course of his rousing late-night history lesson, the Count says to Jonathan Harker (Bram Stoker, The Annotated Dracula, ed. Leonard Wolf, illust. Sätty [NY: Clarkson N. Potter, 1975], p. 31):

Who more gladly than we throughout the Four Nations received the ‘bloody sword’, or at its warlike call flocked quicker to the standard of the King? When was redeemed that great shame of my nation, the shame of Cassova, when the flags of the Wallach and the Magyar went down beneath the Crescent, who was it but one of my own race [John Hunyadi, Wolf suggests—p. 32, n. 19] who as Voivode crossed the Danube and beat the Turk on his own ground? This was a Dracula indeed!

It strikes me that it is rather idiosyncratic of Dracula to call Kosovo ‘that great shame of my nation’, when the Serbs themselves held it to be either glorious—‘Everything was holy and honorable, and acceptable to gracious God’ say the poets (qtd. in Fr Justin [Popović], ‘Life of the Holy and Great Martyr Tsar Lazar of Serbia’, The Mystery and Meaning of the Battle of Kosovo, trans. Fr Todor Mika & Fr Stevan Scott [Grayslake, IL: New Gračanica, 1989], p. 39)—or at least in keeping with the tragic nature of things (per Simic). Unfortunately, the problem is compounded by Wolf’s note, where he quotes William Stearns Davis to the effect that ‘the battle of Kossova had proved that it was beyond the power of the Balkan people to turn the intruders come out of Asia’ (qtd. in Stoker, p. 32, n. 17). Clearly this was not the Serbs’ understanding of the battle.
Posted by Aaron Taylor at 7:15 PM

Perhaps it is simply the Count speaking as one who chose the earthly over the heavenly. ;)

A very astute comment my friend! That was what I meant to imply by my parenthetical comment about the Count. It is certainly in keeping with Dracula's charactre, a fact made more explicit in The Historian, and a cool notion. Unfortunately, it strikes me as less likely that Stoker intended such a clever irony than that Stoker was simply unaware of the traditional Orthodox interpretation of the battle and thought defeat=shame. I prefer your idea though!

The mistake is on your side, the passage clearly refers to the second battle of Kossova, which Hunyadi lost.

Thank you for your comment, Mr Wunderlich. I shall look into this!