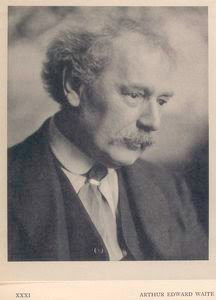 In keeping with my fondness for obscure interconnections, wonderfully fed by Bishop Savas’s comments on my Allchin post, I thought I would point out an interesting one between two items in two recent posts. Charles Williams, the main subject of this post, was a good friend of Daniel Nicholson, one of the editors, with Arthur Lee, of The Oxford Book of English Mystical Verse (Lakewood, CO: Acropolis, 1997), from which Newman’s poem ‘Melchizedek’ was taken in this post. According to Humphrey Carpenter, ‘. . . Williams had found in him somebody who was fully his equal in conversation’ (The Inklings: C.S. Lewis, J.R.R. Tolkien, Charles Williams, and their Friends [Boston: Houghton Mifflin, 1979], p. 116).

But I thought I would also take the opportunity to post another of the many interesting poems from this anthology. ‘Of Consummation’ is an encomium to ascetic struggle and particularly, it would seem, celibacy, by the English occultist Arthur Edward Waite, a member of the Golden Dawn (along with Nicholson and Williams), the designer of the most famous Tarot deck, and a fringe Catholic who believed in ‘what he called the “Secret Tradition” of Christianity’—basically a sort of Gnosticism (see Carpenter, p. 82). It is found in Nicholson and Lee, p. 444:

Wise, O heart, is the heart which loves; but what of the heart which refrains—
Not as if counting the cost, and preferring the ease to the pains,
But knowing how treasures of all are neither received nor given,
The aching void that is under love and above it the aching heaven?

Wise are the lips which have learn’d how long may linger the lips’ caress,
But wiser they who the hungering lips can chasten and repress,
For that which our fain mouths burn to kiss and loving arms to embrace
Has never been given to lips or arms in the world of time and space.

Wise, therefore, and wise above all, is he who does not swerve aside,
But knows to his greatest need on earth is service of earth denied;
Who, least things asking of flesh and blood, and less than the least of rest,
Goes on demanding the perfect good and disdaining the second best.

After much conquest and toil not doubt, but high in his starry tracks,
Shall the greater ministers come to him burning the sacred flax,
Saying: So passes the world and so the glory and light expend;
But the High Term, follow’d unflinching, cries: I can repay at the end.

It would be interesting to know what Williams thought of the sentiment of this poem, which he surely read, in light of his own emphasis on the ‘Romantic Way’.
Posted by Aaron Taylor at 12:00 AM

Gosh, a shout-out! Thanks, Aaron. And thanks, I think, for the poem. (I'm a little leary of that Golden Dawn crowd.)

One is, of course, right to be leary! I suppose, however, at some point I adopted an attitude toward many of them of cautious but sympathetic interest. I think some of them--Waite is a good example--were sincerely trying to get at some kind of real spirituality in the arid desert of Victorian and Edwardian Anglicanism. Clearly, they were misguided and likely enough in spiritual delusion, but I feel sorry for them more than anything else.

Such feelings do not extend toward such as Crowley, who has given his former confreres a bad name despite having been decisively excommunicated by them (Yeats was actually told at one point to stand guard outside the GD headquarters to prevent Crowley attempting to to break in!). The man who, according to Cyril Connolly, 'bridged the gap between Oscar Wilde and Hitler' called Waite, for one, 'a dull and inaccurate pedant without imagination or real magical perception'.

Although I believe the author goes too far in many respects, here is an article that strongly influenced my views on the GD, and particularly as it relates to literature: http://www.cheetah.net/~ccoulomb/hermeticimagination.html

What a densely packed article! It brought to mind material I worked through over a decade ago, while trying to understand a clergyman/friend's involvement with the Rosicrucians. (It was, I confess, I troubling experience for me. Esotericism worries me.) Should I read "The Inklings" this summer? I've been putting it off for years.

The poem, on second and third read, more than passes muster. It seems to me very good for its type.