'The Works of the Desert'—The Holy Abba Onuphrius the Great 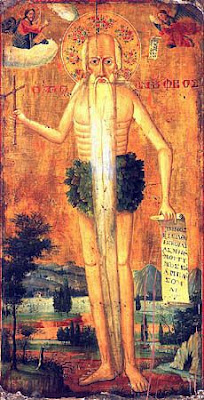 Today, 12 June on the Church’s calendar, we celebrate the memory of our Holy Father Onuphrius the Great (†400). The sole source for St Onuphrius’s life is a St Paphnutius, believed to be the ‘Paphnutius Cephalas’ described by St Palladius in the 47th chapter of the Lausiac History (see the translation at Roger Pearse’s site, here). St Paphnutius tells how he went into the ‘further desert’ to see ‘the servants of God’ who live there (Histories of the Monks of Upper Egypt & the Life of Onnophrius, trans. Tim Vivian [Kalamazoo, MI: Cistercian, 1993], pp. 145, 147). He writes:

Now suddenly I looked and I saw a man in the distance; he was very terrifying because his hair was spread out over his body like a leopard’s. Indeed, he was naked, and leaves covered his male member. When he came up close to me I was afraid and I climbed up on a ledge of the mountain, thinking that perhaps it was a wild ass. . . . He raised his eyes to the mountain ledge; he saw me and called, ‘Come down to me, holy man. I too am a man of the desert, like yourself. I live in this desert on account of my sins.’ He said to me, ‘You too are a friend of God’. So I sat down in front of him and I asked him to tell me his name. (p. 151)

After giving his name (sometimes Anglicised as ‘Humphrey’, the name is believed to derive from the Wnn-nfr meaning ‘he-who-is-continuingly-good’, in Arabic he is called Abü Nufar, which also means ‘herbivore’), St Onuphrius explains that sixty years ago he was a monk at a monastery ‘on the mountain of Shmoun in the Thebaid’ called ‘Eretē’. According to St Onuphrius:

We were all of one mind and lived in accord with one another, and peace dwelled in our midst. We lived together a life of quiet contemplation, glorifying God. Now I would spend the night in vigil with them, and I learned from them the rules of God. The great ones were perfect as the angels of the Lord are perfect. (p. 152)

When he hears the elders speaking about the desert-dwelling of the Prophet Elijah, or St John the Forerunner, St Onuphrius asks whether such desert-dwellers have not outdone the cœnobitic monks, due to the greater ascesis of their way of life (poluteia). The reply he receives is that indeed, such anchorites receive greater rewards and consolations from the Lord because of the greater difficulties and temptations they endure, for, ‘God gives to each person according to what he has suffered. Blessed is he who will do the will of God on earth! I say to you that the angels will serve him from the moment of his birth and they will continue to comfort him at all times in his need’ (p. 153).

St Onuphrius says that he heard the words of the elders ‘like honey sweet to my soul and I was filled within with complete understanding: I became like those whose minds travel to another world’ (p. 154). He got up ‘immediately’, took enough bread for four days, and left for the desert. He saw a light before him, which turned out to be an angel who said, ‘Do not be afraid. I am the angel who has dwelled with you and walked with you since you were a child. You will carry through to its completion this stewardship which the Lord has appointed for you’ (p. 154).

St Onuphrius tells how, after a walk of six or seven miles, he saw a ‘great saint of God . . . handsome in appearance because his face shone with a great grace’ coming out of a cave to greet him (p. 154). He stayed with the hermit a few days and ‘learned from him about God and . . . how to do the works of the desert’, until they walked for four days to ‘a desolate place’—‘the place which the Lord has appointed for you to live in’ (p. 155). There the hermit stayed with St Onuphrius another month ‘until I knew how to do the good work which it was right for me to do. Afterwards he let me and we did not see each other for a year until he laid down his body and I buried him where he had lived’ (p. 155).

At this point, St Paphnutius asks how much St Onuphrius had suffered from the elements. The great hermit explains his experience in terms that seem the very fulfillment of what he had heard from the elders’ lips at Eretē. At first he suffered a great deal. But then he says:

Now when God saw that I patiently endured in the good fight of fasting and that I devoted myself completely to ascetic practices, he had his holy angels serve me with my daily food; he gave it to me at night and strengthened my body. And the palm tree produced for me twelve bunches of dates each year, and I would eat one bunch each month [St Paul of Thebes was similarly aided by a palm tree]. And he also made the plants that grow in the desert sweet as honey in my mouth. For it is written, ‘A person shall not live by bread alone, but by every word which proceeds from the mouth of God shall a person live’ (Mt 4:4; Lk 4:4). (pp. 155-6)

My holy father, an angel of God comes and give me the eucharist on the Sabbath and the Lord’s day; and to everyone in the desert who lives there on account of God and sees no human being, the angel comes and gives the eucharist and comforts them. What’s more, if they desire to see anyone, they are taken up into the heavenly places where they see all the saints and greet them, and their hearts are filled with light; they rejoice and are glad with God in these good things. Now when they are seen they are comforted and they completely forget that they have suffered. Afterwards, they return to their bodies and they continue to feel comforted for a long time. If they travel to another world through the joy which they have seen, they do not even remember that this world exists. (p. 156)

St Paphnutius is comforted and envigourated by St Onuphrius’s tale, and responds, ‘Blessed am I that I have been worthy to see your holy face and hear your sweet words’ (p. 157). The two monks then walk a few more miles to a hut, where they sit and eat together, before spending ‘the whole night praying to God until morning’ (p. 157). Then St Paphnutius writes:

Now when morning came I saw that his face had changed and been transformed as though he had become a different person: it had turned completely into fire and his appearance greatly frightened me. But he said to me, ‘Do not be afraid, my brother in God, for the Lord has sent you to care for my body and bury it. Indeed, this very day I shall complete my stewardship and go to the place of everlasting rest.’ (pp. 157-8)

St Onuphrius promises his intercessions to anyone that will offer some incense on his behalf, but St Paphnutius points out that not all can afford incense on account of their poverty, beseeching him to ‘let your grace rest upon us all’ (p. 158). St Onuphrius says, ‘Let him stand and say his prayers three times to God in my name and the Lord Jesus will bring him to the thousand years and he will receive an inheritance with all the saints’ (p. 158). He then blesses St Paphnutius and bids him return to Egypt ‘to comfort the holy brothers who live in the desert, to proclaim their sweet fragrance among the brethren who worship God as a benefit to those who listen to you’ (p. 159). St Paphnutius concludes his account of the great anchorite:

When he had finished saying these things, he rose and prayed to God with sighs and many tears. Afterwards he lay down on the ground and completed his stewardship of God, and he gave up his spirit into the hands of God on the sixteenth of Paone. And I heard the voices of angels singing hymns before the blessed Abba Onnophrius and there was great gladness when he came to meet God. (p. 159)

St Paphnutius buried the elder himself in a cleft in the rock, using part of his cloak as a shroud. He adds, ‘I said my prayer over him and I rolled several stones over him. I stood up and prayed a second time and immediately the palm tree fell down’ (p. 160).

Tim Vivian’s translation of the Life of St Onuphrius, published along with St Paphnutius’s Histories of the Monks of Upper Egypt, includes a fascinating introduction (featuring, among other points, a memorable analysis of the words politeia and the Coptic toou, with its two senses of oros and erēmos). Sometime I would like to post a bit about some of his observations there.

May the memory of Father M. Louis,
who is worthy of praise,
remain with us forever.

Then, as if to add insult to injury, Russell observes in his Foreword, ‘Fittingly, he dedicates his book to the truest modern son of the monastic desert, Thomas Merton’ (p. 9). I have mentioned my feelings about Merton previously. All I will say now is, off the top of my head I can easily think of any number of truer modern sons of the monastic desert.

There is an Orthodox monastery (with a seminary) in Poland dedicated to St Onuphrius (see here, under 'Monastery', for an article in Polish). Also, I discovered that St Onuphrius at one time enjoyed a certain fame in the West, where it appears artists often conflated him with the legendary ‘wild man’ or ‘woodwose’ (whence ‘Wodehouse’!). Furthermore, the famous Swiss humanist, Sebastian Brant (1457-1521), wrote a number of poems about St Onuphrius and named his son after the legendary anchorite. According to this review, in a 2001 book (in German), Roland Stieglecker—

suggests that with this panegyric Brant expressed in a humanist mode his admiration for the eremitic life and advocated a rejection of materialism to his non-eremitic readers. This poetry, offering as it did a sincere, hopeful response to the moral decadence Brant saw around him, thus complements his famous satire The Ship of Fools (1494); and so Stieglecker concludes that the poetry is no less ‘humanist’ for its hagiographical subject, no less ‘Christian’ for its classicizing forms and pagan imagery.

Unfortunately, I can’t seem to discover an English translation of any of this poetry. But for those who don’t recall, Brant’s satire, Das Narrenschiff, describes nearly every imaginable kind of fool. According to Nicholas Basbanes, however, ‘First to address the reader is the Book-Fool:

I am the first foole of all the hole nauy,
To kepe the pompe, the helme and eke the sayle
For this is my mynde, this one pleasoure haue I
Of bokes to haue grete plentie and aparayle
I take no wysdome by them. . . .