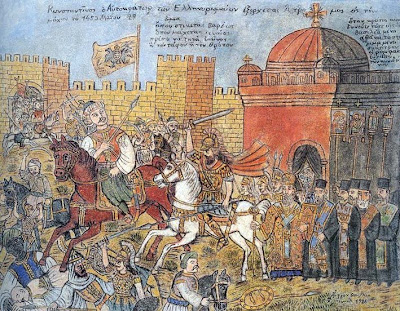 Today, 29 May on the Church’s calendar, is the day that Dracula, in Elizabeth Kostova’s The Historian (NY: Back Bay, 2006), p. 606, calls ‘the worst date in history’ (I quote the context here): the fall of Constantinople, New Rome, to the Muslim Turks on a Tuesday in 1453. In the words of David Dereksen, The Crescent and the Cross: The Fall of Byzantium: May, 1453 (NY: G.P. Putnam’s Sons, 1964), pp. 246-7, at Vespers on the evening of the 28th, the Emperor Constantine XI Palæologus (technically Constantine XII)—

went the rounds of every prelate in the church, asking them to pardon him if he had ever offended any of them, embraced each one, and then went to the altar to receive Holy Communion. As a Christian Emperor, he was solemnly preparing in the presence of his people to say good-bye.

When he turned to leave the church, the congregation burst into tears, and the women wailed from the arcades of the upper floors. Obviously deeply moved, Constantine walked slowly out of the church into the night air, through the ruined courtyards, and then went on to the imperial palace at Blachernae, where he had ordered his entire court and its servants to await him. There he told them that no one could tell what the night would bring forth; he asked from each forgiveness for any harshness or injustice; and then he took his most touching leave of all, from his intimates and his enemies, whereas before he had merely said farewell to God and his people.

Dereksen goes on to tell of the Emperor’s fate when he learned that the walls had been breached:

The news staggered the Emperor. Someone suggested, as the Italians fled toward the harbor, that he might still be able to reach it safely himself. Those who had horses galloped past the defenders on their way there. Constantine came to himself and said merely, ‘God forbid that I should live an Emperor without an Empire. As my city falls, I will fall with it.’ . . .

. . . From the neighboring streets, Constantine turned to his suite and said, ‘Whoever wishes to escape, let him save himself if he can; and whoever is ready to face death, let him follow me!’ He then swiftly removed any clothing that might identify his body—with one exception, which he unfortunately forgot—and spurring on his horse, rode forward sword in hand to meet the Turks at the end of the street. He was followed by about 200 Greek and Italian nobles and volunteers. Don Francesco di Toledo rode on the Emperor’s right hand, Demetrius Cantacuzenos, whose progenitor a hundred years before had usurped the throne, on his left. The Turks engaged them almost at once, and a good many of them were killed. Theophilus Palæologus was mortally wounded, fell from his horse, and was trodden underfoot. Don Francesco di Toledo lasted a little longer. The Emperor was separated from his followers, and his horse fell under him. He went on fighting on foot. An Assab struck him in the face. The Emperor cut him down, but fell forward himself, mortally wounded. None of the attackers knew who he was. (pp. 252-3)

It turned out however that the Emperor had forgotten his boots, ‘which were purple and embroidered in gold with the double imperial eagle’ (Dereksen, p. 261). Thus, someone cut off the head from his corpse and brought it to the Sultan, who had it publicly displayed to prove that he was dead. The eminent historian of Byzantium, A.A. Vasiliev, has quoted the lamentation of Michael Ducas on the sack of the city (qtd. in History of the Byzantine Empire [Madison, WI: U of Wisconsin, 1976], p. 654):

John Julius Norwich has said that of the ‘eighty-eight men and women [who] occupied the imperial throne’, ‘the vast majority were brave, upright, God-fearing men who did their best, with greater or lesser degrees of success’ (A Short History of Byzantium [NY: Vintage, 1999], p. 382). Of the East Romans generally, he writes:

Their follies were many, as were their sins; but much should surely be forgiven for the beauty they left behind them and the heroism with which they and their last brave Emperor met their end, in one of those glorious epics of world history that has passed into legend and is remembered with equal pride by victors and vanquished alike. (p. 383)

Finally, Sir Steven Runciman, having argued that the incursion of the Turks into Europe could not have been halted ultimately, concludes (The Fall of Constantinople, 1453 [Cambridge: Cambridge U, 1990], p. 189):

Nevertheless the date of 29 May 1453 marks a turning-point in history. It marks the end of an old story, the story of Byzantine civilization. For eleven hundred years there had stood on the Bosphorus a city where the intellect was admired and the learning and letters of the Classical past were studied and preserved. Without the help of Byzantine commentators and scribes there is little that we would know today about the literature of ancient Greece. It was, too, a city who rulers down the centuries had inspired and encouraged a school of art unparalleled in human history, an art that arose from an ever varying blend of the cool cerebral Greek sense of the fitness of things and a deep religious sense that saw in works of art the incarnation of the Divine and the sanctification of matter. It was, too, a great cosmopolitan city, where along with merchandise ideas were freely exchanged and whose citizens saw themselves not as a racial unit but as the heirs of Greece and Rome, hallowed by the Christian Faith. All this was now ended.

I was preceded in observing this solemn day by the ever-alert Kevin Edgecomb, who posted about it 13 days ago (here), making many insightful and perspicacious comments. He also points out the campaign to restore Hagia Sophia (currently a museum) to the Orthodox Church, and links to the website for the ‘Free Agia Sophia Council of America’.

I would also like to point out the beautiful gallery of modern photographs and 1852 Chevalier Gaspard Fossati renderings of Constantinople and Hagia Sophia here, at Византийский урок.

Finally, here is a Pontian lament for the fall of the City, taken from Road to Emmaus, where it is prefaced with a note:

A song from Pontos near the Black Sea Coast. Until the 20th century, Christians of Asia Minor, conscious of being heirs of the Roman Empire, referred to their land as Romania, and themselves as Romios.

Although I appreciated the passage from Sir Steven's classic, I think the final paragraph is the most powerful. I don't have the book at hand, and can only find its last sentence on line, so it will have to do (for now): "They remembered that dreadful Tuesday, a day that all true Greeks still know to be of ill omen; but their spirits tingled and their courage rose as they told of the last Christian Emperor standing in the breach, abandoned by his western allies, holding the infidel at bay till their numbers overpowered him and he died, with the Empire as his winding sheet."

Roger Crowley's "1453" is a wonderful read. Everyone I've forced it on agrees. Remarkably, even though the outcome is a foregone conclusion, one reads of the last days with a strange sense of hope that the Pope's reinforcements will appear at the eleventh hour - pathetic, I know, but a testimony to Crowley's narrative prowess.

I also encourage your readers to visit http://www.byzantium1200.com, a marvelous imaginative reconstruction of the City before its sacking by the Crusaders.

Thank you, Theophylestate. That is indeed a lovely line from Sir Steven.

I've seen 1453 and thought about reading it sometime, but I don't think I'd ever heard of the Byzantium 1200 website. Neat!