'As thou art a giver of riches, give me the Saviour' 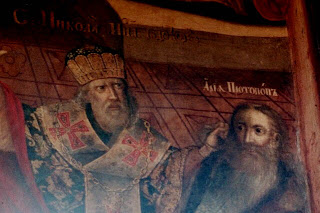 With insufficient tongue and lips I have come to offer small praise and supplication, O Nicholas, to thy God-like excellence; but as thou art a giver of riches, give me the Saviour and God of mercies. (From the Second Canon to the Saint, Tone 1, Matins of 6 December)

Tonight we are celebrating the feast of St Nicholas the Wonderworker, Archbishop of Myra. St Nicholas is sort of the unofficial patron Saint of my family (followed closely by St Benedict, St Cyril of Jerusalem, and St Demetrios—okay, we have a lot of patron Saints!). We take him very seriously. That’s why I am so annoyed, not with Santa Claus per se, whom I believe, in some forms, to be a legitimate guise of the Saint, but with the extent to which he has been taken. The obesity, the garish suit, the cutesy ornaments of Santa in sunglasses and Hawaiian shirt, and most of all, the phony Santa ‘origin’ stories that get made into movies and told in countless books (the Rankin & Bass stop-motion film, Santa Claus Is Comin’ to Town is a classic example). Unfortunately , the madness has even spread to the city of Myra itself, where the beautiful, iconographic bronze statue of St Nicholas donated by the Russian government for the town square has been replaced by an awful, kitschy plastic Santa. (See the story here.)

As a good remedy for this disease, and for a surpisingly good philosophy of the holidays in general, I recommend that everyone read the book, St Nicholas: A Closer Look at Christmas (Nashville: Nelson, 2005), by Joe Wheeler and Jim Rosenthal. Not only is it filled with extremely rare, full-colour photos of St Nicholas in his many guises, not only does it tell faithfully the story of the historic man and Orthodox Saint, but it contains serious suggestions for how to make the holidays meaningful again by taking full advantage of the traditions Christians around the world have observed for centuries.

Of course, the Service, Akathist, Life and Miracles of St Nicholas the Wonderworker (Jordanville, NY: Holy Trinity Monastery, 1996), is also an invaluable resource for commemorating this wonderful Saint.

Neither of these books, however, contain two of what are, to me, the most interesting stories about St Nicholas (apart from the striking of Arius the heretic, depicted above). I won’t waste time trying to copy them or to retell them myself. One can read the first here, at the fantastic St Nicholas Center website, and the second here, on an archived page from the website of the St Nicholas Russian Orthodox Church in Dallas, Texas.

The Matins Gospel for the feast is St John 10:9-16, wherein our Lord says, ‘I am the good shepherd. The good shepherd gives His life for the sheep’ (St John 10:11). One can’t help but notice that the kontakion of the Saint makes a lovely comment on the significance of this passage for this day when we sing:

In Myra, O Saint, thou didst prove to be a minister of things sacred: for, having fulfilled the Gospel of Christ, O righteous one, thou didst lay down thy life for thy people, and didst save the innocent from death. Wherefore, thou wast sanctified, as a great initiate of the grace of God.

Happy feast day! I sadly couldn't make it to Church, for the snow is copious indeed.

I am of the opinion that you should adopt St Nicholas as your family Slava, and thus join the ranks of Civilized Peoples. Thank you.

Happy feast day to you as well!

I am always telling my children about the virtues of Civilisation and how we need to be civilised. I suppose we really MUST adopt St Nicholas, so that those are not merely empty words!

You guys can then have bumper stickers made in Slavonic that say: "Saint Nicholas the Wonderworker: Putting the Smackdown on Heresy Since 325!"

That would be an awesome bumpersticker! I love it!

Say the word and I will come down next year to chant your Krsna Slava for you! ;-)

Esteban> Okay, so are you coming?!