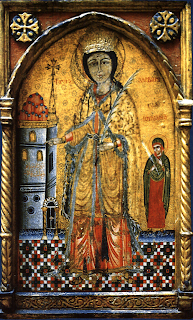 I nearly forgot to mention that today is the feastday of two great Saints (whose Lives can be read here): the Great Martyr Barbara (306) and St John of Damascus (760). Concerning the first, I will just point out the charming custom (based on a tradition that St Barbara kept and watered a cherry branch during her imprisonment that watered when she was martyred) of cutting branches and bringing them into the house in the hopes that they will bloom by Christmas. The wonderful traditionalist RC website, Fish Eaters, quotes from Maria von Trapp on this custom and even includes instructions on how to procure the best results.

Concerning St John Damascene, I would like to take the opportunity provided by his feastday to promote the translation of his ‘Lives of Ss Barlaam and Ioasaph’ by Fr Asterios Gerostergios and with notes by Metropolitan Augoustinos (Kantiotes) of Florina, published by the Institute for Byzantine and Modern Greek Studies as The Precious Pearl: The Lives of Ss Barlaam and Ioasaph. I do not have it in front of me, so I can’t quote this precisely, but I seem to recall Fr Gerostergios mentioning in the 'Preface' that he uses this book for catechesis at his parish. I think this a sound idea, as the work is not merely a hagiographical narrative, but the occasion of an in-depth training in the ABC’s of the Orthodox Faith. Precious Pearl is one of my favourite books of all time. Please consider ordering it here.
Finally, I'd just like to mention that it is unfortunate that the introduction to the (to my knowledge, only) English translation of one of St Damascene's other major works, The Fount of Knowledge, is marred by the ridiculous prejudices common to many RC scholars, particularly of an older generation. As a particularly egregious example, the translator, Frederic H. Chase, Jr., states baldly on page v that The Fount of Knowledge 'is the last work of any theological importance to appear in the East' (Frederic H. Chase, Jr., 'Introduction', St John of Damascus: Writings, trans. Frederic H. Chase, Jr., Vol. 37 of The Fathers of the Church: A New Translation [Washington, D.C.: Catholic U of America, 1999], p. v). Let us hope that a new edition (or even a new translation, since Chase's was first published in 1958) of this fundamental work of patristic theology will one day bear an introduction that truly does justice to St Damascene, as well as to the whole theology of the Orthodox East of which he was an integral part.
Posted by Aaron Taylor at 1:06 PM

What a wonderful idea, to use St John Damascene's Lives of Sts Barlaam and Ioasaph as a catechetical text! I can't imagine why it didn't occur to me before. While I was in Puerto Rico I catechized many a new convert, and I used any number texts (patristic, liturgical, and hagiographical) depending on the abilities and inclinations of the person; but clearly this would be a superb text in which to immerse oneself in almost every case. Thanks for passing on the suggestion; I shall file it for future use!

You are very welcome! Reading that comment in the prefatory material affected my whole reading of the book.

Perhaps I should also have mentioned the multitude of lovely iconographic line drawings by Kontoglou's pupil, Rallis Kopsidis!