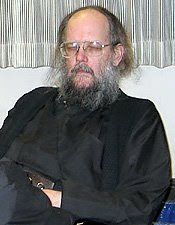 It’s occurred to me how much the work of Hieromonk Alexander (Golitzin) deserves to be more widely known (in my opinion, at least as widely, if not more than, the other Fathers Alexander—Schmemann and Men). Ever since I discovered him he’s worked his way into just about anything I’ve written, and I’ve mentioned Fr Alexander more than once, I believe, on this blog. Specifically, his work on St Dionysios the Areopagite—embodied in an Oxford doctoral dissertation published as ‘Et Introibo ad Altare Dei’: The Mystagogy of Dionysius Areopagita, with Special Reference to Its Predecessors in the Eastern Christian Tradition, Αναλέκτα Βλατάδων 59 (Thessaloniki: Patriarchal Institute for Patristic Studies, 1994), as well as a number of scholarly articles—proved a profound and invaluable aid to my own meagre understanding of the Corpus Dionysiacum. Sad to say, I was quite lost in the latter until being rescued by Fr Alexander. I still recall the interest with which I read Vincent Rossi’s review of Et Introibo in Divine Ascent (Divine Ascent: A Journal of Orthodox Faith, Vol. 1, No. 2, Exaltation of the Holy Cross 1997, pp. 92-5), followed by the excitement and fascination and, indeed, tears of joy, with which I read Fr Alexander’s own article, ‘Dionysius Areopagites in the Works of Saint Gregory Palamas: On the Question of a "Christological Corrective" and Related Matters’, my personal entrée into his work.

Soon there followed the reading of more articles (discovered, like the first, on the fantastic Jewish Roots of Eastern Christian Mysticism interdisciplinary seminar website hosted by Marquette University), during the course of which I continued to be struck, not only by the content of Fr Alexander’s ideas and the extent of his research, but by the wit with which he expressed himself. Take for instance, this little jewel of a footnote in ‘Hierarchy versus Anarchy? Dionysius Areopagita, Symeon the New Theologian, Nicetas Stethatos, and their common roots in ascetical tradition’ (SVTQ 38,2 [1994], p. 153, n. 95):

‘Biblical’ versus ‘Platonist’ echoes altogether too clearly the reaction of Roman Catholic and Orthodox scholars earlier this century to the late nineteenth and early twentieth century thesis of a ‘Hellenized’—and therefore corrupted—Christianity associated in particular with Adolph von Harnack. People such as Jean Cardinal Daniélou, Henri de Lubac, or indeed Vladimir Lossky fought Harnack a little too hard. While we all owe a great debt to these men, among whom Father John [Meyendorff] is certainly to be included, this does not mean that we are obliged to accept distinctions that do less than justice to the texts and thought of the ancients, or—worse—subject them often uncritically to the concerns of philosophies and movements that are quite alien to them. Modern existentialism comes to mind in this context. A Daniélou, for example, might have had an ear cocked to what was being said over the absinthe at Café les Deux Magots, but we need not. It is simply past time to have done with the exploded myth of a pure Hebrew, or ‘Semitic,’ tradition over and against a subversive ‘Hellenism.’


Not the least of the fascination, I believe, with Fr Alexander is in his own personal story, told more or less in a number of different places. He admits to having experienced his own crisis in attempting to understand the Corpus Dionysiacum, a crisis resolved, for him, by having spent a year at the Holy Monastery of Simonopetra on the Holy Mountain, and being exposed to its elder, Archimandrite Aimilianos. In the Preface to Et Introibo, he writes about the year he spent living under his ‘father in God’, Elder Aimilianos:

Two features of this experience figure importantly…in my discovering what I believe to be at once the core of the Dionysian message, and the reason for the corpus’ swift reception. These were, first, the as it were “architecture” of the monastic life of personal and corporate prayer and, second, the phenomenon of the ascetic holy man. (Et Introibo, p. 9)


Fr Alexander makes it more explicit in his review of Elder Aimilianos’s Discourses that ‘the holy man whom I had met’ was the elder himself and describes the monastery as a a place ‘where his presence and thought were embodied’ (Hieromonk Alexander [Golitzin], Rev. of Spiritual Instructions and Discourses, Vol. I: The Authentic Seal, by Archimandrite Aimilianos, Divine Ascent: A Journal of Orthodox Faith 7, Presentation of the Theotokos, Nov. 2001, p. 179). It is not often that I have encountered such honest personal accounts of how one’s scholarly work has been effected by one’s spiritual life, and it’s a moving thing to see.

I have mainly focused on Fr Alexander’s studies on the Corpus Dionysiacum, but one mustn’t lose sight of the wide-ranging nature of his work. I have already had occasion a number of times on this blog to refer to his collection of Hagioritica, Living Witness of the Holy Mountain: Contemporary Voices from Mount Athos (South Canaan, PA: St Tikhon’s Seminary, 1994). He is also responsible for the 3-volume translation of St Symeon the New Theologian’s Ethical Discourses, published in the invaluable St Vladimir’s Popular Patristics Series, and, with the Michaels Prokurat and Peterson, of the Historical Dictionary of the Orthodox Church (Lanham, MD: Scarecrow, 1996). I recently noted Fr Alexander’s publication of an edition and translation from the Syriac of Jacob of Sarug's Homily on the Chariot that Prophet Ezekiel Saw in the enormous catalogue of Gorgias Press. Finally, in addition to his strictly scholarly work, he has published a number of reviews in Divine Ascent, including the aforementioned review of Elder Aimilianos’s Discourses.

So please, everyone, avail yourselves of the work of Hieromonk Alexander (Golitzin). As Rossi has described Et Introibo, ‘This is an intellectual odyssey to the heart of the Orthodox Christian Tradition and as such is to be recommended without reservation to every thoughtful believer’ (p. 95).

Addendum: Since the writing of this post, Fr Alexander has been elected and consecrated Bishop Alexander of Toledo, to serve as the ruling hierarch of the OCA's Bulgarian diocese. Axios! Axios! Axios! I will not say, as Fr Peter Heers more legitimately wrote of the consecration of Metropolitan Hierotheos of Nafpaktos, that this 'can only mean that the Church has given its enthusiastic approval of his writings', if only because Bishop Alexander's writings are so much more obscure. But surely it doesn't signify disapproval at least! Read about the consecration, including some insightful remarks from His Grace on his acceptance, here. Many years to His Grace, Bishop Alexander.

I can hardly believe that I missed this post when you published it (though perhaps I wasn't yet following your blog last December, I can't recall).

I enthusiastically agree that Fr Alexander's work ought to be more widely known. Though actually I am not as familiar with his work as much as I am with the man himself. I had the incomparable privilege to be Fr Alexander's student over the course of a couple of years in the Late Vocations Program (aka "seminary night school") of the OCA Diocese of the West in the 1980s. A dozen or so of us met Tuesday nights at the diocesan chancery to be given the benefit of Fr Alexander's broad and deep scholarship and piety. I do not consider myself a scholar or a theologian, but such knowledge as I do have comes to me, in large measure, from Fr Alexander. My intellectual debt to him can never be repaid.

A Daniélou, for example, might have had an ear cocked to what was being said over the absinthe at Café les Deux Magots, but we need not.

Thanks for posting this quote. I can hear Fr Alex's voice in it, and picture how he would deliver such wit without anything so unsubtle as a smile, just the merest hint of a twinkle in his eye.

Your Late Vocations Program sounds awesome--an incomparable privilege indeed. Oh boy, would I love to do something like that!

Finally, thank you for animating the face behind the wit. I shall relish imagining that twinkle whenever I come across such lines in his work.