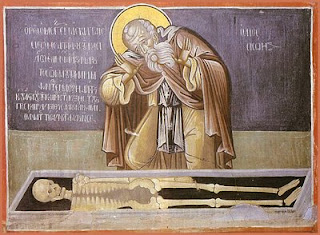 Memento mori is a Latin phrase that means 'remember death'. It is commonly used to refer to a genre of art created for the spiritual or philosophical purpose of reminding people of their mortality. Plato writes in his dialogue, Phaedo, that 'the one aim of those who practice philosophy in the proper manner is to practice for dying and death' (Phaedo 64a, trans. G.M.A. Grube, in Plato, Complete Works, ed. John M. Cooper [Indianapolis: Hackett, 1997], p. 55). They do this, he goes on to say, by pursuing the things of the soul and attempting to free it through asceticism from its attachment to bodily pleasures. In other words, what Plato calls ἡ μελέτη θανάτου, the 'practice' or 'study' of, or even 'meditation' on death, is what we would now call a 'spiritual discipline' aimed at developing the soul and putting reality into true perspective.

It is a notion that the ancient Christians found to be very much in harmony with life in Christ. Although, as is well known, Plato's own view on the body and the physical world was excessively negative, the Christian Tradition certainly sees the soul and body, the spiritual and physical worlds, in terms of a hierarchy, with the very temporality and corruptibility of physical things prompting us to turn our real attention to spiritual things. Thus, in the 6th-century Ladder, St John Climacus writes, 'It is impossible, someone says, impossible to spend the present day devoutly unless we regard it as the last of our whole life. And it is truly astonishing how even the Greeks [that is, the pagans] have said something of the sort, since they define philosophy as meditation on death [μελέτη θανάτου]' (The Ladder of Divine Ascent, rev. ed., trans. Archim. Lazarus [Moore], rev. Holy Transfiguration Monastery [Boston: Holy Transfiguration Monastery, 1991], p. 69; Κλῖμαξ, 9th ed., ed. and trans. Archim. Ignatios [Oropos, Greece: Holy Monastery of the Paraclete, 2002], p. 139).

Of course, Church Fathers like St John recognised the value of ideas and terms like Plato's because they reminded them of specifically Christian teachings. Consider for instance the parable of the rich man in Luke xii, 16-20, a clear statement of the memento mori/μελέτη θανάτου theme:

And he [Jesus] spake a parable unto them, saying, 'The ground of a certain rich man brought forth plentifully: and he thought within himself, saying, "What shall I do, because I have no room where to bestow my fruit?" And he said, "This will I do: I will pull down my barns, and build greater; and there will I bestow all my fruits and my goods. And I will say to my soul, 'Soul, thou hast much good laid up for many years; take thine ease, eat, drink, and be merry.'" But God said unto him, "Thou fool, this night thy soul shall be required of thee: then whose shall those things be, which thou hast provided?"' (KJV)

Thus, it is in direct response to such evangelical teachings as these that the Fathers urged Christians to be mindful of or meditate upon their own mortality. The monastic tradition in particular has sought to practise mindfulness of death. St Antony the Great carried out some of his most intense spiritual struggles while living in a tomb. The Apophthegmata Patrum attributes the following saying to Abba Evagrius of Pontus: 'Remember the day of your death. See then what the death of your body will be; let your spirit be heavy, take pains, condemn the vanity of the world, so as to be able to live always in the peace you have in view without weakening' (Evagrius 1; Benedicta Ward, trans., The Sayings of the Desert Fathers: The Alphabetical Collection, rev. ed. [Kalamazoo, MI: Cistercian, 1984], p. 63).

At some point, this mindfulness of death sought expression in the visual arts (I shall leave aside poetry for the time being). It is found in many guises, perhaps the most common of which is the skull. Although the theme is most familiar in late mediaeval and particularly Counter-Reformation Western art, the 'memento mori' theme is not unknown in the East either. One famous scene found painted in many Orthodox monastic churches (I have posted it above)—for instance among the frescoes of Theophanes the Cretan at Holy Meteora—depicts St Sisoes upon discovering the remains of Alexander the Great lamenting, 'I fear thy sight, O Grave, and shed heartfelt tears, pondering the common destiny of man. Ah, ah, Death! who can escape thee?' The lesson is clear: memento mori.

Of course, it is important from a spiritual perspective that mindfulness of death be cultivated and maintained within the context of faith in the Resurrection. It is surely no accident that despite the initial impression of despair in St Sisoes's lament, his addresses to a personified 'Grave' and 'Death' remind us almost inevitably of St Paul's famous paraphrase of Hosea—'O death, where is thy sting? O grave, where is thy victory?' (I Cor. 15:55; cf. Hosea 13:14). I do not deny that it is quite possible for healthy μελέτη θανάτου to become mere morbidity if separated from its proper context. But those of us who are tempted to 'take our ease' and 'build greater barns' to contain our goods, may find, like the rich fellow of Christ's parable, that Death has not yet lost its sting for us. We need all the help we can get to remember that it is coming, and that when it does, it won't matter how many books, clothes, cars, etc. (insert your favourite things here) we have.
Posted by Aaron Taylor at 5:56 PM