'In Such a Man It Was Good'—St Ambrose of Milan 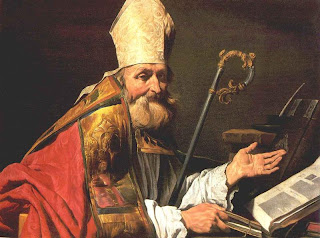 Today, of course, we commemorate the great Father of the West, St Ambrose of Milan, whom St Augustine’s mother ‘loved as an angel of God’ and about whom he wrote that she ‘hung upon the lips of Ambrose’ (Confessions VI; the translation is Edward Pusey’s in the delightful, if impractical, The Confessions of Saint Augustine, trans. E.B. Pusey, illust. Valenti Angelo [Mt Vernon: Peter Pauper, n.d.], p. 96). I write this blog for an imaginary audience that I assume to be largely familiar with St Ambrose, so I won’t waste time on the details of his life and writings. I will pause to note that St Ambrose is well known for having prevailed upon the Emperor Theodosius to do public penance after massacring rioters in Thessaloniki. I find this significant because, having several times advocated the massacring of rioters in Thessaloniki myself, I feel chastened by our holy Father Ambrose, and desirous of imitating the ‘religious humility’ of the pious Emperor Theodosius (De Civitate Dei, V.26; in St Augustine, The City of God, trans. Marcus Dods [NY: Modern Library, 1950] p. 180). Thessalonians, forgive me!

But the main thing I would like to call attention to is from the same chapter of the Confessions that I have already quoted. There, St Augustine observes with curiosity:

But when he was reading, his eye glided over the pages, and his heart searched out the sense, but his voice and tongue were at rest. Ofttimes when we had come (for no man was forbidden to enter, nor was it his wont that any who came should be announced to him), we saw him thus reading to himself, and never otherwise; and having long sat silent (for who durst intrude on one so intent?) we were fain to depart, conjecturing that in the small interval which he obtained, free from the din of others’ business, for the recruiting of his mind, he was loth to be taken off; and perchance he dreaded lest if the author he read should deliver any thing obscurely, some attentive or perplexed hearer should desire him to expound it, or to discuss some of the harder questions; so that his time being thus spent, he could not turn over so many volumes as he desired; although the preserving of his voice (which a very little speaking would weaken) might be the truer reason for his reading to himself. But with what intent soever he did it, certainly in such a man it was good. (St Augustine, p. 98)

Of course, we today are rightly bemused by the curiosity with which the bishop of Hippo regards this ‘eccentricity’—reading silently is the normal practice now, and has been for some time. But Alberto Manguel, in his beautiful book, A History of Reading, points out, ‘Augustine’s description of Ambrose’s silent reading (including the remark that he never read out loud) is the first definite instance recorded in Western literature. Earlier examples are far more uncertain’ (Alberto Manguel, A History of Reading [NY: Viking, 1996], p. 43). Manguel mentions, inter alia, references to silent reading—apparently for dramatic purposes—in Euripides and Aristophanes, the drama of which seem to be recalled in St Augustine’s own silent reading in the famous ‘tolle, lege’ passage in Book VIII (p. 161 of my Pusey trans.). He does refer to one other Christian author—one of my family’s patron Saints, Cyril of Jerusalem, whose Catechetical lectures exhort that ‘the party of young women [the Greek has ‘virginal party’] be so ordered, that they may either be singing or reading, but without noise, so that their lips may speak, but others may not hear’ (Procatechesis 14; in St Cyril of Jerusalem, Lectures on the Christian Sacraments, ed. F.L. Cross, trans. R.W. Church [Crestwood, NY: St Vladimir’s Seminary, 1995], p. 49). But the reading in silence is a bit of a fluke in all of these works, whereas St Augustine specifies that they saw St Ambrose ‘reading to himself, and never otherwise’ (p. 96).

I tend to think this innovative practice (for which he seems to be shrugging his shoulders apologetically in the above painting) reveals St Ambrose to have been quite a clever man, because of its obvious advantages. But it also has drawbacks. Before the ascendancy of silent reading, texts and the reading of them were more of a communal act. Mangel points out, ‘Reading out loud with someone else in the room implied shared reading, deliberate or not’ (p. 50). Silent reading, by contrast, seems to have contributed to the rise to individualism, solipsism, and, as Manguel also notes, even heresy (see. pp. 51-3). It certainly aided in the death of oral culture, with which some of the greatest works of literature—even centuries later (see, for example, C.S. Lewis’s comments on ‘The Style of Secondary Epic’ on p. 40 of his A Preface to Paradise Lost [NY: Oxford U, 1965])—are so inextricably bound. Manguel concludes:

A more accurate depiction of our father among the Saints Ambrose, is here. The mosaic was set either in his lifetime or shortly after. Notice the slightly lighter tesserae around the head, which indicate the head as an older section, while the rest has been reworked. There are some other very old mosaics displaying the same characteristic.

Yeah, I know that mosaic, and I initially assumed I'd use it, but I really wanted to find something that showed him with some books (since that was the main theme of the post), and I didn't see anything matching that description that was more accurate or in a traditional style. Maybe I should have had a disclaimer--'He looked nothing like this, but...!'