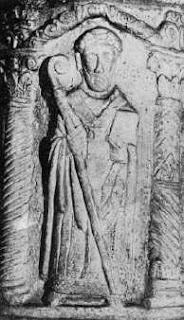 Well, after posting occasionally on my MySpace blog, I thought I'd give a 'Blogger' blog a try. It remains to be seen how it looks, and how well I can handle all of the little technical bits. In the meantime, here is the inaugural post, which actually concerns the MySpace URL I chose, and is intended to go up on my MySpace blog tomorrow morning. If anyone happens to discover this blog, they will get a sneak preview! Here it goes:

Although no one has yet asked, it occurred to me that at some point someone may well wonder at my MySpace URL: myspace.com/verydeepoftruth. I decided an explanation of this phrase might form the subject of an interesting blog post.

In the brilliant introduction to her great little book of translations from Latin sources on the Desert Fathers, Helen Waddell discusses some of the scathing attacks on Christian monasticism by the fourth-century poet, Rutilius Claudius Namatianus, one of the last worshippers of the Roman gods. The poet’s charge was that the monks’ withdrawal from the world, or anachoresis, was uncivilised and inhuman. Having quoted some of Rutilius’s ‘admirable invective’, Waddell points out (Helen Waddell, Introduction, The Desert Fathers, trans. and ed. Helen Waddell [Ann Arbor, MI: U of Michigan, 1957], pp. 8-9):

But it is for a poet to counter a poet: and an answer that would have turned away even Rutilius’ wrath had been written twenty years before him by a man of the same tradition, like him of a great French house, an accomplished scholar, ex-senator, ex-consul, and finally parish priest of Nola: who even as Rutilius sailed for Marseille was living in poverty after spending the last of a royal fortune in ransoming the prisoners taken in the sack of Rome.

Waddell then quotes her own translation of one of the Carmina of the famous Latin Christian poet and hymnographer, St Paulinus of Nola (Helen Waddell, trans., Mediæval Latin Lyrics [London: Constable, 1951], p. 35).

Not that they beggared be in mind, or brutes,
That they have chosen a dwelling-place afar
In lonely places: but their eyes are turned
To the high stars, the very deep of Truth.
Freedom they seek, an emptiness apart
From worthless hopes: din of the market place
And all the noisy crowding up of things,
And whatsoever wars on the Divine,
At Christ’s command and for His love, thy hate.
By faith and hope they follow after God,
And know their quest shall not be desperate,
If but the Present conquer not their souls
With hollow things: that which they see they spurn,
That they may come at what they do not see,
Their senses kindled like a torch that may
Blaze through the secrets of eternity.
The transient’s open, everlastingness
Denied our sight: yet still by hope we follow
The vision that our eyes have seen, despising
The shows and forms of things, the loveliness
Soliciting for ill our mortal eyes.
The present’s nothing: but eternity
Abides for those on whom all truth, all good,
Hath shone in one entire and perfect light.

Waddell gives the Latin text of the poem on the facing page of her translation, and we see there that the phrase she has rendered, ‘the very deep of truth’ is verique profunda. In a brilliant modern analogue to St Paulinus’s defense of anachoresis, the modern Greek philosopher, Stelios Ramfos, refers to St Paulinus’s verique profunda as ‘the eschaton, the ultimately real’. Ramfos concludes, ‘Truth [as the ultimately real] introduces the last things into a life lived within time and together with the last things it also introduces personhood’ (Like a Pelican in the Wilderness: Reflections on the Sayings of the Desert Fathers, trans. and abgd. Norman Russell [Brookline, MA: Holy Cross Orthodox, 2000], pp. 11, 24). Ramfos’s account is an extremely helpful illustration of the contemporaneity of the Desert Fathers’ teachings from a modern psychological/philosophical perspective. [See my review here and here.]

welcome to the world of blogs. we've been waiting for you.

Thank you for the warm welcome. But where's the rest of the committee?