'A Merciful Man'—St Pardus the Solitary of Palestine 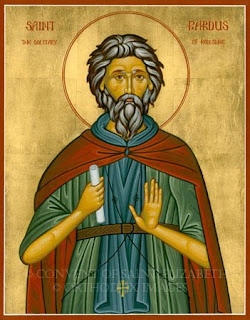 As the Prologue contains an enigmatically short account of St Pardus the Solitary of Palestine (commemorated today, 15 December, according to the old Orthodox calendar), I thought it a good idea to post the two paragraphs of Holy Apostles Convent’s wonderful The Lives of the Saints of the Holy Land and Sinai Desert (Buena Vista, CO: Holy Apostles Convent, 1997), pp. 514-5:

Our holy father lived in Palestine in the sixth century. In his youth, Pardus was a wagoner. One day, arriving in Jericho, he left his beast of burden in front of an inn which he entered. At that moment, it happened that a child fell in front of the beast which trampled upon it, thereby killing it. When Pardus beheld the crushed child, cruelly slain by his animal, his heart became extremely laden with guilt. Though it was an unintentional sin, the conscience-stricken Pardus laid on himself a harsh penance. He abandoned his trade, and, though very young he left the world. He withdrew into the arid desert to live a life of mortification, spiritual toil and repentance.

With many tears, he offered unto God his profound repentance on account of the child’s death. He somehow desired to give his life in exchange for that of the child, for which he prayed to God. He then searched out a lion, hoping it might devour him, but the beast fled from him. Then he decided to lay in the narrow track that the lion habitually tread upon, hoping that it would slay him. But, once more, the lion leapt over him and would not approach. Therefore, he perceived that it was God’s will that he continue to live and not perish as prey. Somewhat allayed, the sensitive and God-fearing sould remained a lowly penitent to his death, as if he were the least of all men in worth.

I have almost nothing to say in comment on this, except that it is interesting that the trampling of a child immediately calls to my mind Robert Louis Stevenson’s The Strange Case of Dr Jekyll and Mr Hyde (NY: Bantam, 1985). There, the charactre of Mr Hyde—the embodiment of the dark side of human nature itself—is introduced by the story of his having ‘calmly’ trampled a child and gone on walking away, deaf to her screams (Stevenson, p. 4). It is rightly used by Stevenson as the most despicable of acts. We have in St Pardus the anti-Hyde, much more than in Dr Jekyll, whom Stephen King has called 'the hypocrite who falls into the pit of secret sin' (Danse Macabre [NY: Berkley, 1983], p. 74). St Pardus is a man of such holy compassion that he spends his life in repentance, not for having himself trampled a child, but for his animal having done it. He is a beautiful illustration of St Isaac the Syrian’s well-known words about the ‘merciful heart’:

‘And what is a merciful heart?’ ‘It is the heart’s burning for the sake of the entire creation, for men, for birds, for animals, for demons, and for every created thing; and by the recollection and sight of them the eyes of a merciful man pour forth abundant tears. From the strong and vehement mercy which grips his heart and from his great compassion, his heart is humbled and he cannot bear to hear or to see any injury or slight sorrow in creation. . . .’ (St Isaac the Syrian, The Ascetical Homilies of St Isaac the Syrian, trans. Dana Miller [Boston, MA: Holy Transfiguration Monastery, 1984], p. 344-5)

Would that I had such compassion, such a humbled and merciful heart!
Posted by Aaron Taylor at 1:06 AM