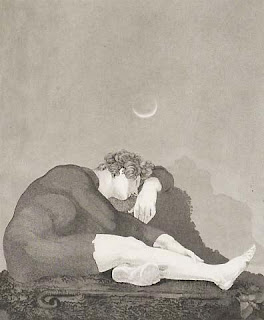 My wife’s comment on the Death to the World poem got me to thinking—the regular feature in the ‘zine under which my poem was published is called ‘Common Suffering’. It certainly seems like an opportunity for more typical modern ‘emo’ poetry, an opportunity which I hope I’ve passed up. But it got me to thinking about how suffering can be expressed in a non-‘emo’ kind of way. It occurred to me that although today it is expected that the expression of suffering will be highly emotive and ‘expressive', in ages past it has been expressed in ways that are more sublimated to the disciplined structure of literary form. In other words, the very use of poetry to express one’s suffering should in itself already be seen as a kind of stylisation of raw emotion, an imposing of order upon inner chaos.

A famous example is John Milton’s pastoral elegy, Lycidas, written to commemorate the drowning of Edward King, a Cambridge schoolmate of the poet, at the age of twenty-five (‘Lycidas’, Benét’s Reader’s Encyclopedia, 3rd ed., ed. Katherine Baker Siepmann [NY: HarperPerennial, 1987], p. 589). In keeping with Milton’s general reputation, it is a learned poem in high style, and a close imitation of a Classical form complete with numerous allusions to figures of pagan mythology. Unfortunately, one of the greatest critics of English literature, Samuel Johnson, was led by this stylised aspect of the poem to give a verdict that could be that of any number of modern readers:

It is not to be considered as the effusion of real passion; for passion runs not after remote allusions and obscure opinions. . . . Where there is leisure for fiction there is little grief.

This is what C.S. Lewis has called a ‘confusion (arising from the fact that both are voluntary) between the organization of a response and the pretence of a response’, as well as being surely akin to his ‘Romantic Primitivism . . . which prefers the merely natural to the elaborated, the un-willed to the willed’ (A Preface to 'Paradise Lost' [NY: Oxford U, 1965], p. 55). Just because Milton has carefully and skillfully stylised the expression of his grief, does not mean that he does not truly feel it. In fact, Jon S. Lawry has demonstrated, I believe, that within the poem itself ‘The timeless, serene, and objective attitudes of pastoral, impassioned only in formal artistic imitation of loss, are opposed by the skeptical affronts of death, temporal corruption, and several failures of consolation, all of which are impassioned in and through actual experience’ (‘“Eager Thought”: Dialectic in Lycidas’, Milton: Modern Essays in Criticism, ed. Arthur E. Barker [NY: Oxford U, 1965], p. 113).

Of course, Lawry notes, ‘That the apparently destructive argument of actuality has also been cast in poetry, is . . . an indication that its force is limited’ (ibid., p. 113). In this sense, the artistic form of poetry partakes of a ritualistic quality, described by Lewis as ‘a pattern imposed on the mere flux of our feelings by reason and will, which renders pleasures less fugitive and griefs more endurable’ (Lewis, p. 22; Thomas Howard has made use of this passage in a wonderful article for Touchstone, an article that deserves much more attention). In Preface, Lewis is of course speaking primarily of epic (specifically, what he calls ‘secondary epic’) in connection with ritual, but I tend to think this observation is more or less true of poems of all genres.

Although I am no biblical scholar, as a daily reader of the Psalms, I find this to be true of the latter perhaps par excellence. While it is surely the case that there is little to compare with the suffering expressed, for instance, in Psalm 21 (LXX), not for one moment could it legitimately be called ‘emo’. If nothing else, the typical use of parallelism—the chief poetic feature of the Psalms, according to Patrick Miller’s introduction in my HarperCollins Study Bible (NY: HarperCollins, 1994), p. 798—saves it from such a fate. Furthermore, our Lord’s quotation of the opening line of this Psalm precisely as he hung upon the Cross in Matthew 27:46 and Mark 15:34 is surely eloquent testimony that there is nothing dishonest or artificial about expressing grief not only in poetic words, but in those of another author. While I would not be too surprised to find some silly person (probably an evangelical trying to appeal to modern youth) in our day referring to the poetry of the Psalms as ‘emo’, surely even they would realise the blasphemy of applying such a concept to our Lord’s expressions of suffering on the Holy Cross.

A couple of years ago, a good friend of mine who was about to be made a catechumen at our parish was killed in a car accident. I was quite literally in shock when I first received the news, but as I started to grieve and weep, I found myself writing. Each and every day for the first week or so I wrote a poem. Now, although I like to think it has a rhythm of its own, most of my poetry, like the one I posted yesterday, is rather unruly. I feel like I still have a long way to go to truly master real metre and rhyme, which in this case led me, interestingly, to occasionally use the form of the Psalms as a model. But I found that the mere search for words itself, the attempt to forge a verbal expression of that profound grief, was enough to impose a pattern ‘on the mere flux’ of my feelings. As I touched some of the rawest emotions I had experienced in some time, it was precisely form that I sought for their expression.
(The image above is an 1803 aquatint illustration to Lycidas by Henry Fuseli.)
Posted by Aaron Taylor at 6:28 PM