The Pantheon & the Errata of the Inept Dan Brown 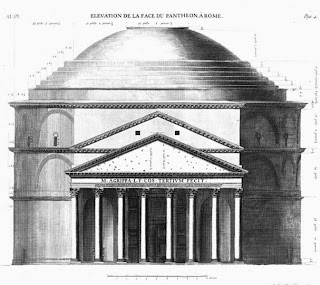 Due to pressure from various persons in my life, I am unfortunately unable to claim that I have not read the wretched Dan Brown (about whom my friend Esteban has already posted, and concerning whom everyone should read these pieces as well as the comments here). Yes, I know, it is a sad fact. One rather positive by-product of this reading, however, is the notes that I was able to make on some of the pitiful Brown’s errata, particularly in the terrible Angels & Demons which has not been combed by others quite so thoroughly as its more famous cousin, the lamentable The DaVinci Code.

At one point in this atrocious novel, Angels & Demons, the renowned 2nd-c. Roman building (and now RC church) known as the Pantheon figures into the cookie-cutter plot of the thing. At that point, the pathetic author of this train-wreck makes three mutually-contradictory statements about the historic building.

Now, keep in mind that I did not actually 'read' (the printed version of) the catastrophically bad Angels & Demons. I listened to an audiobook. Thus, I had to rely on my memory of the aural presentation (not as trustworthy as my memory for printed words) to identify the following mistakes. When I later turned to the printed edition in order to confirm what I remembered, I discovered that the statements I am about to quote come from within the same 16 pages.

First, the laughable Brown writes: ‘The Venerable Bede had once written that the hole in the Pantheon’s roof had been bored by demons trying to escape the building when it was consecrated [i.e., converted into a church] by Boniface IV’ (p. 225 of the mass-market paperback).

Then, the hackneyed writer has: ‘The Vatican had all the statues in the Pantheon removed and destroyed in the late 1800s’ (p. 228). And now, I think one can begin to see the problem here. But wait! He’s not done!

Finally, the most over-rated novelist of our time ‘informs’ us: ‘...[T]he pagan sculptures had been destroyed when the Vatican converted the Pantheon to a Christian church’ (p. 241).

Now, granted the unlikelihood that the statues would have been left in the building when it was consecrated by Boniface, as well as the anachronism of referring to the ‘Vatican’ has having acted in the 7th c. (which date, admittedly, our unlearned author gets wrong), it seems to me that it is at least possible that any two of these statements can be correct simultaneously, assuming as well, of course, the law of non-contradiction. It is however, flatly impossible that all three of them could be accurate. Were the sculptures destroyed when the Pantheon was converted into a church? Or were they destroyed in the late 1800s? It is an insoluble difficulty.

But that is not all! The first statement also contains an internal error: while St Bede the Venerable does indeed mention the consecration of the monument by Boniface and the escape of the demons, he says nothing about the ‘boring’ of the hole in either the Ecclesiastical History II.4 or the Greater Chronicle, 6th Age, 4565, where the consecration is mentioned (see Bede, The Ecclesiastical History of the English People, ed. Judith McClure and Roger Collins [Oxford: Oxford U, 1994], pp. 77 & 331). The reader may well suspect that the bigoted Brown invented this detail to make Christians look stupid and benighted as well as intolerant.

To make matters even worse, the sentence immediately preceding the first one I have quoted refers to the Venerable Bede’s comments as ‘a famous sixth-century critique of the Pantheon’ (p. 225). Now first of all, the consecration took place in 609, so already we realise that no reference to that consecration could have been made in the sixth-century, except perhaps prophetically. But of course, the Venerable Bede, having referred to the 7th-c. consecration, must himself have been subsequent to that event, right? It turns out he was. He was born around 673, and finished the Ecclesiastical History in 731. So the wildly inaccurate Brown is actually two centuries off. And while St Bede refers to the idolatry once practised there with the greatest disapprobation (the words ‘abomination’ and ‘filthy’ are used in the translation), it is certainly misleading at least to call his remarks about the building per se a ‘critique’.

All of this seems to me to prove beyond reasonable doubt that when he writes, in his ‘Author’s Note’ at the beginning of the book, ‘References to all works of art, tombs, tunnels, and architecture in Rome are entirely factual (as are their exact locations)’, the inept Dan Brown is either perpetrating a great and largely successful hoax on the reading (or occasionally reading) public, or else he is perhaps the laziest researcher ever to have gained a publishing contract.

Thank you, Esteban. The writing of this post was certainly enjoyable, although I'm afraid I can't say the same for the research it required. I have now suffered that I may bring you entertaining posts!

It amuses me to no end that a three-word comment can elicit such a courteous and elegant reply from you. ;-)

As for the research involved, well, some brave soul (certainly not me) must subject themselves to such horrors so that the rest of us may be saved from them. I thank you, sir, for taking one for the team!

I've found disgusted contempt to be the most effective in putting off the readers of this crap: "How can you read that trash?!" When they start to respond about "history" and "viewpoints," I wave my hand, make a noise that sounds like "pff" and walk away. This effectively plants the seeds of doubt in the reader, causing them to find the book not so good as the New York Times (a.k.a. "Hell's Bible") Bestseller list might imply.

I say gloves off! No prisoners! No pinkies away from the teacup! This is, quite seriously and in all reality, a war for souls.

Thanks! I'm surrounded by barbarians in Berkeley. You have to deal with them in the (petty, childish, anti-intellectual) ways that they understand in order to achieve any effect.... And, wilfully stupid people make me cranky.

Berkeley? My hat is off to you, sir.

Thank you Aaron for your commitment to addressing just one Dan Brown-ism. It would be fun to do it on a larger scale, but time that would take... jeez. Brown has given us SO MUCH material to work with.

I remember the exact moment I dropped the Da Vinci Code. It was like the Star Trek scene where Spock mind melds with the Horta: "the PAIN!"

I never finished the book. I just couldn't take it.

I wave my hand, make a noise that sounds like "pff" and walk away

I feel this is sound advice. I've tried to discuss Da Vinci Code with local bohemian and non-Christian friends. Their eyes glaze over when you mention phrases like "original greek" and "proof".

"pff" is probably the best and most efficient way to communicate. I suspect this may work when discussing Spong, too.

Oh, yes, Spong! That works. I once saw him walking along a street here. The one of the paifully liberal Graduate Theological Union schools had him by to blather on about "Why I still receive a paycheck and pension from an institution I don't believe in" or perhaps a new "book" of his. That man is the whitest of white men that I have ever seen. Ick. Even albinos have more color to them.

Kevin> I was just re-reading your last comment here, and the reference to albinos made me realise: Spong would make a great Dan Brown character!

I believe Anne Rice takes the gold for most overrated 'author' of our time.

Jack> I must disagree, for 3 reasons.

First, Anne Rice is certainly highly overrated by her fans, but her fans are really a rather small subculture (many of my friends used to belong among them!), whereas Brown has taken mainstream society by storm, so his overratedness is more widespread.

Second, although Rice is certainly overrated, & although there is much in her books that is sheer garbage, she also has a number of moments of decently written prose, of a kind of enchantment in the tale, or even of something approaching mythopoiesis. I'm thinking particularly of Interview, Memnoch the Devil, Servant of Bones, & Witching Hour.

Third, I've never heard of anyone believing that they had learned something valuable about Christ, Christianity, or the Church from any of Rice's books. Many, many people have claimed such an experience with Brown's books, & to claim this is to overrate them.