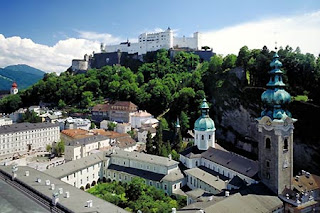 One of the more obscure Saints, I believe, listed for today, 27 November on the Church’s calendar, is St Vergilius (Virgil) of Salzburg (d. 784). Like St Columbanus, whom we commemorated last week, St Vergilius represents an interesting phenomenon: the Irish Saint travelling to the European continent and becoming influential there. According to Thomas Owen Clancy and Gilbert Márkus, St Vergilius was probably from the Monastery of Iona, founded by St Columba (Iona: The Earliest Poetry of a Celtic Monastery [Edinburgh: Edinburgh U, 1995], p. 17). He went to the continent, and after two years in the court of Pepin, became abbot of the St Peter’s Monastery (in the foreground of the above photo) in what is now Salzburg, Austria. St Vergilius was involved in a couple of controversies with St Boniface, but was vindicated by Pope St Zachary of Rome (a Greek Calabrian, restorer of Monte Cassino, and the translator of St Gregory the Great’s Dialogues into Greek, he is an interesting figure in his own right). He was made bishop of the city of Salzburg, and consecrated its first cathedral, there transferring the relics of St Rupert. St Vergilius also sent missionaries to the Slavs, one hundred years before the Cyrillo-Methodian mission. He fell asleep in the Lord on 27 Novemer 784.
St Vergilius’s see, Salzburg is the birthplace of Mozart and former home of the Von Trapp family. It is a beautiful city with a wonderfully preserved Baroque Old Town, and there one can still see the now Benedictine (and very Baroque!) Archabbey of St Peter, where Mozart’s ‘Mass in C Minor’ (the ‘Große Messe’) was first performed. Unfortunately, after St Vergilius’s repose, the duchy of which the city was a part was conquered by Charlemagne, and the bishops of Salzburg, who had once been ascetic monks and abbots of the monastery of St Peter, eventually became secular administators (see the St Pachomios Library article). Their palace on the hill (see the above photo) still dominates the entire city. Sadly, N. Redington points out that it was the successors of St Vergilius who became the main opponents and persecutors of Ss Cyril and Methodius just one century later. But, he reassures us, ‘although Austria and Bavaria have not been Orthodox for a thousand years, the saints of the Orthodox period still live in Christ, interceding for their countries and all humanity.’
Posted by Aaron Taylor at 1:43 PM