Oblature and the St Benedict Medal 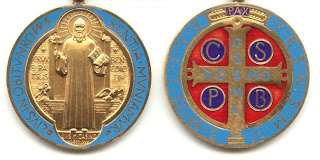 As our parish church is dedicated to St Benedict of Nursia, my spiritual father decided to start a group for lay people interested in studying St Benedict’s Rule and trying to apply it to their lives, keeping in mind that these people are not celibate, cœnobitic monks. Such groups are traditionally known as ‘oblates’ of St Benedict, from the Latin oblatio, or ‘offering’. In the West they have been around in some form since St Benedict himself was alive, and Chap. 59 of the Rule mentions boys being ‘offered’ to the monastery during the Oblation.

Well, today my wife and I became novice oblates. There was a short ceremony during the liturgy, in the course of which our spiritual father asked, ‘What do ye seek?’, and we replied, ‘The mercy of God and fraternity with the Community (confraternitatem).’ We then received a small copy of the Rule and a St Benedict medal to wear around our necks.

This medal is a very interesting item. I have included a photograph of it above. The front side features a fairly simple cross, on the vertical bar of which are the letters C.S.S.M.L., standing for Crux Sacra Sit Mihi Lux (‘The Holy Cross Be My Light’), and on the horizontal bar the letters N.D.S.M.D., for Non Draco Sit Mihi Dux (‘Let Not the Dragon Be My Guide’), and in the angles the letters C.S.P.B., for Crux Sancti Patris Benedicti (‘The Cross of the Holy Father Benedict’). Surmounting the cross is the word PAX, or ‘Peace’, the Benedictine motto. The margin contains the letters V.R.S.N.S.M.V.—S.M.Q.L.I.V.B., for the distich, Vade Retro Satana, Nunquam Suade Mihi Vana—Sunt Mala Quae Libas, Ipse Venena Bibas (‘Begone, Satan, do not suggest to me thy vanities — evil are the things thou profferest, drink thou thy own poison’).

The reverse side features an image of St Benedict with a cross in his right hand and the Rule in his left. On one side is the cup of poison that cracked when St Benedict blessed it (St Gregory the Dialogist, Dial. II.III.4), and on the other is the raven he used to feed (St Gregory, Dial. II.VIII.3). On either side of his head are the words Crux Sancti Patris Benedicti, while the margin is inscribed, Eius in obitu nostro praesentia muniamus (‘May we at our death be fortified by his presence’—St Benedict is often invoked for a holy death). Beneath St Benedict’s feet is the inscription, ex SM Casino MDCCCLXXX (‘from Holy Monte Cassino, 1880), showing that it was designed for the 1400th anniversary of St Benedict’s birth, celebrated at his famous monastery of Monte Cassino in Italy.

This ‘Jubilee’ medal is a particular version of a medal that had already been around for two or three hundred years, and was based on some crosses and inscriptions found on the walls of another German monastery and said to have protected it from witchcraft. At some point a couple of years ago, I came across a reference to the design of the ‘Jubilee’ version of the medal that noted it had been done at the Art School of the Beuron Monastery in Germany (mentioned approvingly by Fr Placide [Deseille] in his wonderful conversion-to-Orthodoxy story, ‘Stages of a Pilgrimage’, in Hieromonk Alexander [Golitzin], ed. and trans., The Living Witness of the Holy Mountain: Contemporary Voices from Mount Athos [South Canaan, PA: St Tikhon’s Seminary, 1999], p. 63) . The liturgical art produced at this monastery, beginning in the first half of the nineteenth century, is quite beautiful and fascinating. I’ll have to dedicate a future post to the sadly obscure subject of Beuronese art!
Posted by Aaron Taylor at 4:47 PM

Aaron,
Could you post a fuller bibliography of St Gregory's 'Dialogues'? I'd be interested in reading more of his perspective on St Benedict. Thank you.

My apologies, JCW, I was still trying to sort out my citation policy when I posted this. If you want to read the complete 'Dialogues' of St Gregory (of which Book 2 is the Life of St Benedict'), it is available online here: http://www.tertullian.org/fathers/gregory_00_dialogues_eintro.htm. There are a number of editions of Book 2 without the rest of it, of which the most common is probably the translation by Carolinne White in Penguin Classics' 'Early Christian Lives', and the coolest is probably the 'Life of St Benedict' with commentary by Adalbert de Vogue, and translated by Hilary Costello and Eoin de Bhaldraithe (published by St Bede's Publications in Brewster, MA).

Hope that helps! Let me know if you need more info!

That's wonderful. Thanks so much for the citation.

I would like to know if your NOVICE oblate period is now complete, and what being a novice involved...what was asked of you, and your wife, or what did you ask of yourself.

When you have addressed that question would you be so kind as to
say "what comes next?"
Rod from Ireland.

Rod> I'm working on the e-mail to you right now.