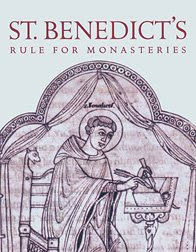 St John Climacus’s famous statement in Ladder 26:31, ‘Angels are a light for monks, and the monastic life is a light for all men’ (The Ladder of Divine Ascent, rev. ed., trans. Archimandrite Lazarus [Moore] [Boston: Holy Transfiguration Monastery, 1991], p. 167), is an oft-repeated maxim in the Orthodox Church, or at least it seems like I’ve seen it quoted frequently. One becomes quite accustomed to the idea of laypeople adapting monastic books and monastic customs for life in the world. Indeed, even the typikon itself is monastic in origin!

Thus, it was a bit of a pleasant surprise to read Adalbert de Vogüé’s comments on Saturday’s reading from the Rule of St Benedict, RB 49. St Benedict begins the chapter with the following statement:

The life of a monk ought at all times to be lenten in its character; but since few have the strength for that, we therefore urge that in these days of Lent the brethren should lead lives of great purity, and should also in this sacred season expiate the negligences of other times. (Abbot Justin McCann, trans. and ed., The Rule of Saint Benedict in English and Latin [Fort Collins, CO: Roman Catholic Books, n.d.], p. 115)

First of all, de Vogüé notices that this sentence echoes certain statements in St Leo the Great’s sermons on Lent, such as this from 39.2:

And although this state of preparedness, dearly-beloved, should always be maintained that our ever-watchful foes may be overcome by unceasing diligence, yet now it must be the more anxiously sought for and the more zealously cultivated when the designs of our subtle foes themselves are conducted with keener craft than ever. For knowing that the most hallowed days of Lent are now at hand, in the keeping of which all past slothfulnesses are chastised, all negligences alerted for, they direct all the force of their spite on this one thing, that they who intend to celebrate the Lord’s holy Passover may be found unclean in some matter, and that cause of offence may arise where propitiation ought to have been obtained. (NPNF 2: XII)

Thus, according to de Vogüé, St Benedict was inspired by the Roman pontiff’s address to ‘persons in the world’, urging ‘them to take advantage of the coming of Easter to recover the purity which should characterize the life of a Christian at all times’ (Adalbert de Vogüé, Reading Saint Benedict: Reflections on the Rule, trans. Colette Friedlander [Kalamazoo, MI: Cistercian, 1994], p. 243). RB 49 applies a teaching given to Christians in the world to Christians in the monastery.

But de Vogüé goes further. Recalling St Cassian’s teaching that Lent itself was ‘instituted only for seculars’ (de Vogüé, p. 243), since ‘this observance of Lent did not exist at all as long as the perfection of the primitive Church remained unsullied’ (Conf. 21.30; John Cassian, The Conferences, trans. Boniface Ramsey [NY: Newman, 1997], p. 742), de Vogüé points out that the entire practice of observing Lent in the monastery is a borrowing from the ‘secular Church’. This seems a profound observation indeed! Of course, St Cassian’s reference to the ‘primitive Church’ should be a reminder that, although de Vogüé does not mention it explicitly in this context, St Benedict’s quotation of Acts 4:35 in RB 34—‘Distribution was made unto every man according as he had need’—is at least an implicit indication that he follows St Cassian’s Conference 18 in tracing the origin of monasticism itself to the ‘secular’, if not ‘secularised’, Church of the Apostles. In Conf. 18.5.1, St Cassian equates the ‘discipline of the cenobites’ with the life of ‘the whole multitude of believers in Jerusalem’, quoting Acts 4:32, 34-5 as an icon of the monastic life (Cassian, p. 637). This strikes me as indubitable testimony that it doesn’t matter whether we are tonsured or not, by God’s grace we are still capable of living the Christian life to its fullest.
Posted by Aaron Taylor at 8:07 PM