Taking Back the Holy Martyr Sebastian 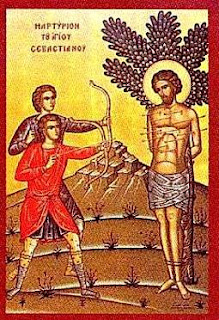 Now that I have apparently risked alienating some of my favourite Orthodox bloggers by posting about the ‘O Antiphons’, I feel I must do something to get my Byzantine-Russian-Eastern Rite-cred back. I’m not sure what that is, yet, but I do have a chance to show that I do not uncritically adore all things Western. Today on the Old Calendar is the feast day of the Holy Martyr Sebastian and those with him. A native of Milan, he was a soldier who was martyred under Diocletian in 287. In the West, he was sometimes counted as one of the 'Fourteen Auxiliary Saints' or 'Holy Helpers', replacing one of the original fourteen--Ss Agathius, Barbara, Blaise, Catherine, Christopher, Cyriacus, Denis, Erasmus, Eustace, George, Giles, Margaret, Panteleimon, and Vitus. Here is the account of his life in the Prologue. Here is the Kontakion of the Holy Martyr (Fourth Tone), according to the Holy Transfiguration Monastery Great Horologion (Boston: Holy Transfiguration Monastery, 1997), p. 350:

Since thou wast great in zeal for godly religion, thou didst assemble an alliance of Martyrs, and in their midst, thou shonest like a flashing star. With the arrows that did pierce thy much-suffering body, thou didst slay the enemy, O Great Martyr Sebastian; and thou thyself didst fly as from a bow into the Heavens, where Christ hath received thy soul.

According to the always skeptical Catholic Encyclopedia, the depiction of St Sebastian being pierced with arrows began with the Renaissance, but it’s certainly mentioned in the 5th-c. Acts of the Holy Martyr (see Butler’s retelling of the Acts here), and St Nikolai tells it in the Prologue. Now, the icon above—which, of course, may well have been derived from the Western portrayals of the subject—depicts the Holy Martyr Sebastian suffering soberly and manfully from the arrows being fired at him. Note, too, the manly beard!
But the Western portrayals, and they are legion, almost invariably depict the Saint as a very attractive young man, with a fleshy, sensual appearance, his scanty covering nearly ready to slip off, and his head and eyes rolled back almost as if he’s deriving sexual pleasure from his treatment. Add to this the fact that he is bound to a tree, and there is an undeniably homoerotic, sadomasochistic element to the whole thing. It certainly has not been lost on homosexual, sadomasochistic-type people.

Now, as much as I may not like the idea of a Holy Martyr being co-opted for a decidedly carnal purpose, I must admit that the tendency of Western religious art has helped to encourage this. The sober, sacred, and hieratic charactre that Western religious art originally had in common with the Byzantine tradition (even, for a time, after the Schism) had been replaced by a purely sensual, dramatic emphasis. Whereas the oldest depiction of St Sebastian is a very sober, spiritual mosaic at Ravenna, Italy, this one is all too typical of later portrayals.
Some may, I would anticipate, try to discover in this art some ‘spirituality’ of its own, for as Photios Kontoglou has pointed out, ‘Man has distorted everything and has characterized as spiritual every carnal tickling, provided this sensual tickling be refined. This counterfeit spirituality is called by Paul the “mind of the flesh” [2 Rom. 8:7]’ (Byzantine Sacred Art, 2nd ed., trans. and ed. Constantine Cavarnos [Belmont, MA: Institute for Byzantine and Modern Greek Studies, 1992], p. 25-6).
But anyone with a half-way Orthodox phronema must always be horrified by this art, which is religious only in subject matter. Even Catholics are occasionally more level-headed. Merton has complained that ‘the saints in art began to strike operatic attitudes and found themselves surrounded by rosy clouds of infant cherubim. It was then that the only distinguishing mark separating male from female sanctity was to be sought in the clothing of the holy ones’ (Thomas Merton, ‘Sacred Art and the Spiritual Life’, Disputed Questions [NY: New American Library, 1965], p. 128). Furthermore, it is telling that those who would defend this art on the grounds of some sort of dichotomy between art and liturgy are forced to conclude, ‘But it is obviously true that neither the theology nor the philosophy of this art which elevates nature through beauty is the art of the liturgy’ (H.A. Reinhold, Liturgy and Art, Vol. 16 of Religious Perspectives [NY: Harper & Row, 1966], p. 89).
So whether or not the icon above is of an independent, Orthodox tradition or is derived from later, dubious Western models, I think I have to welcome it. It represents a drive to take back the Saints of the Church from the distortions to which they’ve been subject and present them in their proper, sacred context. Holy Martyr Sebastian, pray to God for us!

As an addendum, I just discovered when reading the infallible Adalbert de Vogüé today (in Reading St Benedict: Reflections on the Rule, trans. Colette Friedlander [Kalamazoo, MI: Cistercian, 1994], p. 82) that in RB 7:24, St Benedict, following the Rule of the Master 7:45, quotes the following maxim from the Acts of St Sebastian 14 (printed in Migne, PL 17):

LOL. I may have thought twice about posting that had you started your posts sooner - but you backward Old Calendar types... :)

I really do wish I could care about them. I wish I had some real connection with the Western liturgical tradition.

I hope Met Hilarion and Bp Jerome push the WR in ROCOR heartily and successfully here in the US and elsewhere. I pray they help to bring some orderliness to the whole WR; I likewise hope the new leadership in the Antiochian WR (the #2 is a former Lutheran pastor I know well) does the same. What is desperately needed is a theology of the WR that addresses the misgivings raised by many in Orthodoxy, and a humility before the checkered, unstable and often schismatic history of the WR in Orthodoxy heretofore. ROCOR seems to be on a better trajectory on these matters by focusing on pre-Schism rites and practices rather than simply editing and blessing Anglican and second millennium Roman Catholic rites - or that is my broad understanding of what is used in the Antiochian WR. We'll see. It is always valuable, though, to consider what the proper pastoral response could be if whole denominations, dioceses or parishes in these traditions wished to join Orthodoxy en masse but feared many of their people would be alienated by the foreignness of the Byz rite.

I have actually proposed soliciting a WR community for my parish since we have space and we need money and we may as well support any and all Orthodox that want access to our location. A rising tide lifts all boats, as far as I am concerned. I wish there was a WR parish nearby that I could even visit regularly.

Your Byz cred is safe - even if you did quote Merton while trying do regain it...

Sebastian was a name my wife liked for our son and it grew on me more and more, especially after reading more about the Serbian-American priest of that name currently venerated locally by Serbs in CA.

Thank you for your kind words, Mr Orr! To tell the truth, I would probably be quite sick of the O Antiphons myself if I'd been barraged by posts about them. There are few things I find more annoying than spiritual fads!

Thank you for reminding me of Fr Sebastian! I really ought to have mentioned him in my post.

As for the WR generally, I know very little about it. My parish has WR services on Saturday mornings, but they are still mostly unfamiliar to me. I'm thinking about posting some things Fr Placide said about WR vs. ER, because from what little I know, I pretty much follow his opinion.

Keep up the great blog, and thanks for stopping by!