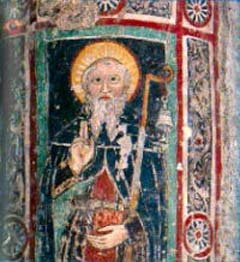 Besides the major feast of the day, that of the Entry of the Most Holy Theotokos into the Temple, Orthodox today also remembered St Columbanus of Bobbio, abbot and founder of Luxeuil Abbey in Gaul (615). A native of Ireland, according to Christopher Dawson, 'St Columban was perhaps the most dynamic personality the Celtic Church produced, and it was through him and his disciples that Irish monasticism first became a force in continental culture' (Religion and the Rise of Western Culture: Gifford Lectures Delivered in the University of Edinburgh, 1948-1949 [Garden City, NY: Image, 1958], p. 58). Piux XI attributed the mediæval 'renaissance of Christian learning in France, Germany and Italy . . . to the work and zeal of St Columban' (qtd. in Brendan Lehane, Early Celtic Christianity [London: Constable, 1996], p. 147). He is well known for his monastic Rule, which for a time was extremely popular in Europe, but, along with most other rules in the West, was eventually replaced by the less 'severe' Rule of St Benedict.
As a dedicated reader of St Benedict, I thought it would be a nice gesture on the feastday of St Columbanus to post a small excerpt from the latter's Rule, that the wisdom and contributions of such a great Saint will not be forgotten.

10. On the Monk's Perfection
Let the monk live in a monastery under the direction of a single father, in the company of many, so that he may learn humility from one, and patience from another. One may teach him silence and another gentleness. Let him not do as he wishes, let him eat what he is told to eat, let him keep what he has received, let him carry out his duties and be obedient to someone he would not have chosen. Let him come tired to his bed and sleep while he is still walking, and let him be made to rise before he has slept enough. Let him be silent when he suffers wrong, let him fear the superior of the monastery as a lord, and love him as a father, believing that whatever he commands is for his own good. Let him not pass judgment on the opinion of an elder; his duty is to obey and carry out what he is commanded to do, as Moses says: 'Hear, O Israel,' and the rest (Dt 6:4). (Oliver Davies and Thomas O'Loughlin, trans., Celtic Spirituality, Classics of Western Spirituality [NY: Paulist, 1999], p. 256)