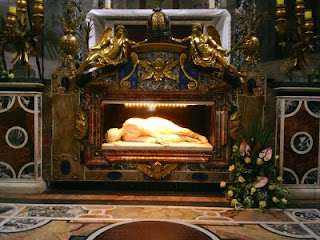 On this day, 22 November on the Church's calendar, we commemorate the Holy Martyr Cecilia. According to the Prologue, St Cecilia was a Roman martyr who suffered in 230, but it seems archæological evidence has suggested she is even earlier than that (see the Catholic Encyclopedia article, a piece somewhat marred, unfortunately, by excessive rationalism). When she was asked at her trial how she could be so bold as to face death, she replied that her courage came 'From a pure conscience and an unquestioning faith' (St Nikolai of Zhicha, The Prologue from Ochrid, Vol. IV: October, November, December, trans. Mother Maria [Birmingham: Lazarica, 1986], p. 225). Incidentally, in his rendition of the story in the Second Nun's Tale, l. 434, Geoffrey Chaucer has, 'Of conscience and of good feith unfeyned' (The Works of Geoffrey Chaucer, 2nd ed., ed. F.N. Robinson [Boston: Houghton Mifflin, 1957], p. 212)--according to Lawrence Besserman, a paraphrase of I Tim. 1:5 (Chaucer's Biblical Poetics [Norman, OK: U of Oklahoma, 1998], p. 63).

On his blog, Vultus Christi, the RC priest Fr Mark (apparently located in the diocese of Tulsa!), has pointed out that Dom Prosper Gueranger of Solemnes had a great veneration for St Cecilia and encouraged her veneration in his Benedictine Congregation. Fr Mark adds:

It is not surprising that Benedictines should feel a certain affinity with Saint Cecilia. One of the responsories for her Office aptly illustrates the monastic life: “The glorious maiden carried the Gospel of Christ always in her breast, and meditated therein day and night, talking with God and praying. V. She spread forth her hands and prayed unto the Lord, and her heart was enkindled with fire from heaven. R. Talking with God and praying.”

As I have already noted, St Cecilia also turns up in Chaucer. The Second Nun's Tale is a telling of her Life, but from a literary point of view I find myself most fascinated by the interpretation of her name in the Prologue. Lines 102-112 read:

Or elles, loo, this maydens name bright
Of 'hevene' and 'leos' comth, for which by right
Men myghte hire wel 'the hevene of peple' calle,
Ensample of goode and wise werkes alle.

For 'leos' 'peple' in Englissh is to seye,
And right as men may in the hevene see
The sonne and moone and sterres every weye,
Right so men goostly in this mayden free
Seyen of feith the magnanymytee,
And eek the cleernesse hool of sapience,
And sondry werkes, brighte of excellence.

On the basis of a brief reference to St Cecilia praising God in song as she was suffering martyrdom, she later came to be regarded as the patron Saint of music in the West. A number of composers have written pieces in her honour, and the English poet, John Dryden, wrote a moving 'Song' on the power of music in honour of St Cecilia's feastday, the chorus of which reads:

As from the pow'r of sacred lays
The spheres began to move,
And sung the great Creator's praise
To all the blest above;
So, when the last and dreadful hour
This crumbling pageant shall devour,
The Trumpet shall be heard on high,
The dead shall live, the living die,
And Music shall untune the sky.