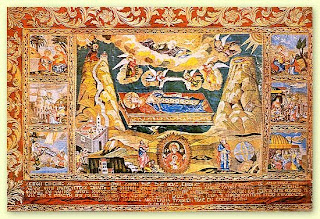 Today, 24 November (Old Calendar) we in the Russian Church celebrate St Catherine the Great Martyr of Alexandria. In the West she has been considered the patron Saint of philosophers, because during her trial the Emperor ‘summoned fifty of the wisest men, to dispute with her about faith and put her to shame, but Katharine was wiser than they, and put them to shame (St Nicholas of Zhicha, The Prologue from Ochrid, Vol. IV: October, November, December, trans. Mother Maria [Birmingham: Lazarica, 1986], p. 235). The Prologue calls her ‘greatly gifted by God, exceptionally well-educated in Greek philosophy, medicine, rhetoric and logic’ (ibid., p. 235). According to one blogger, the mediævals had a custom of delivering encomia on Aristotle on St Catherine’s day, and she is the patron of Oxford’s Balliol College.

A Sequence attributed to Adam of St Victor is much esteemed in the West:

Let the voices of our choir resound in praise of our Creator, who disposes all things; by whom they fight who are unskilled in war, by whose power maidens triumph over men.

Through him, the people of Alexandria stand amazed to see in blessed Catherine qualities that seem above her sex, when she vanquishes learned men by her science and the sword by her courage.

To the glory of her race she adds the precious ornaments of incomparable virtue; and noble by birth, she becomes more noble still by grace and holy living.

Tender is the flower of her beauty, yet she spares it neither labour nor study; and in early youth she masters earthly science and that which is of God.

A chosen vessel full of virtue, she considers transitory goods as mire, contemning her father’s wealth and her ample patrimony.

Filing her vessel with oil, as a wise and prudent virgin, she goes to meet the Spouse; that, ready at the hour of his coming, she may enter without delay to the feast.

Longing to die for Christ, she is led before the emperor; and in his presence, by her eloquence, puts fifty philosophers to silence.

For love of God she endures the horrors of the prison, the cruel wheel, hunger and want, and all her other sufferings; she remains unchanged through all.

The tortured overcomes her torturer, a woman’s constancy triumphs over the emperor; yea, the emperor himself is tormented, seeing both executioner and torments unavailing.

At length she is beheaded, and by death ending death, enters into the joys of life, while Angels with all care bury her body in a far-off land.

An oil flowing from her body, by a visible grace heals the sick; good indeed is the unction she gives us, if she heals our vices by her prayers.

May she rejoice to see the joy she causes us; may she who gives us present joys give likewise those to come; and may she now rejoice with us, and we with her in glory. Amen.

The RC blogger, Fr Mark, points out that St Catherine was dropped from the RC calendar in 1969, but was reinstated by John Paul II after he made a pilgrimage to the famous Monastery of St Catherine at Mt Sinai, where her relics were said to have been translated by angels (see the reliquary cloth at the top). According to Fr Mark, his motives were largely ecumenistic, but one wonders if the pope might have had some personal experience of the grace of this Saint whom the Orthodox have never ceased to venerate.

As a virgin who was betrothed to Christ, St Catherine has been invoked by girls looking for husbands—mainly in France—and on her day the French honour all unmarried women over the age of twenty-five, called ‘Catherinettes’. See the cute customs associated with this day here.

Some words of Dom Guéranger, from whose book the above Victorine Sequence was taken, make a fitting conclusion, I think:

O blessed Catherine, accept us as thy disciples. In thy person, philosophy, true to its beautiful name, leads us to Eternal Wisdom, truth leads to goodness, and science to Christ who is the way, the truth, and the life (ibid., p. 402).